Fear has finally arrived – inflation, aggressive policy from the Fed, China's slowing economy and Russia's potential military action. Everything supported the safe-haven dollar and contributed to a much-needed correction in the pound. The Fed decision is now in the limelight.

This week in GBP/USD: Fear of the Fed returns

Greenback comeback: The safe-haven US dollar benefited from various concerns, first and foremost the upcoming Federal Reserve decision. Several prominent market influencers such as JP Morgan's CEO Jamie Dimon and Goldman Sachs filled in the void left by the Fed's blackout period and weighed in on the urge to act to curb inflation.

Speculation about an immediate end to tapering, a double-dose rate hike in March, and also a series of many rate increases spooked markets, sending funds away from stocks to the dollar – the king of cash. Worries about high inflation caused a sell-off in bonds, pushing yields to the highest since February 2020, thus making the dollar attractive.

The labor market remains robust in the UK, with the unemployment rate dropping to 4.1% in November, beating expectations.

UK inflation beat expectations with 5.4% YoY in December, above 5.2% projected. Bank of England Governor Andrew Bailey said his institution would need to respond, adding fuel to the fire.

Pound-positive British data kept sterling bid, but uncertainty about the political future of Prime Minister Boris Johnson countered any rise. While Downing Street asks the public to wait for the results of an official inquiry, some Conservative MPs are reportedly plotting against the PM. Unflattering opinion polls provide back wind to these efforts.

The good news from the UK comes from the virus front – covid cases are tumbling down all across the country, promising a decrease in hospitalizations and economic relief. 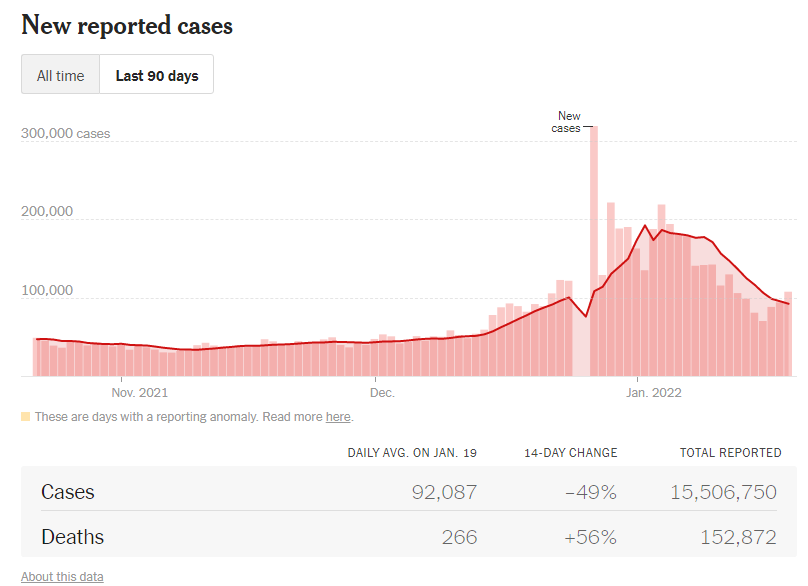 Who wants to be PM? It seems like the right question to pose for pound traders. The current PM appears to be on his way out, as he gradually loses support from the public and his party. For sterling, the best outcome would be a quick leadership contest within Tories, in which Chancellor of the Exchequer Rishi Sunak moves to the top job. He is seen as a safe pair of hands on the economy.

A protracted leadership contest in which Foreign Secretary Liz Truss or another right-leaning candidate wins would be a less favorable outcome. Forcing a vote of confidence in Johnson or his outright resignation would hit sterling, but it could recover quickly in a "buy the rumor, sell the fact" response. It could later enjoy the winning candidate's "honeymoon" period.

Overall, the political drama could become a pound-positive event.

UK PM Johnson is in dire straits, opening door to political turmoil, Sunak would be pound-positive

After a week of top-tier releases, the UK calendar is lighter again, with only Markit's preliminary Purchasing Managers' Indexes for January standing out. The Services PMI is of particular interest, as Britain's largest sector. A decline toward 50 – the threshold separating expansion from contraction – would weigh on the pound.

Trading in the last week of January will be centered on the first Federal Reserve decision of 2022. The consensus is for no change in rate hikes at this juncture – but one coming in March, when the bank's bond-buying scheme expires. Some suspect that higher inflation could push Chair Jerome Powell and his colleagues to end purchases already in January.

On the other hand, weak retail sales and market jitters could hold the Fed from moving too aggressively. Keeping a steady hand would also shore up the bank's credibility after doubling the pace of tapering only one month after announcing it.

If Powell refrains from committing to a more aggressive policy, the Fed will send stocks higher and the dollar down.

Ahead of the Fed, Markit's preliminary PMIs are of interest. Has inflation dented business optimism, or is the economy still growing at a rapid pace? December's figures hovered around 57 points, reflecting a healthy expansion. The Conference Board's Consumer Confidence gauge could also move markets, especially if it echoes the parallel survey from the University of Michigan and falls.

After the Fed, the main event is the first release of Gross Domestic Product (GDP) for the last quarter of 2021. The Delta covid variant weighed on growth in the third quarter, but the final three months saw a quicker expansion. Economists expect an annualized growth rate of 5.8%, but forecasts vary, and the first publication tends to surprise markets.

Contrary to some previous releases, Durable Goods Orders for December are published alongside GDP and not beforehand. That means that the final top-tier indicator feeding into growth figures was Retail Sales, which tumbled by 2.3% in the last month of 2021. That lowers expectations – and could lead to an upside surprise.

While the Fed decision tends to dominate the entire week, a significant beat or miss on GDP could steal the show. In any case, it will arguably overshadow other publications such as the Durables mentioned above and also jobless claims.

Last but not least, the Fed's preferred gauge of inflation is due out on Friday. Core PCE hit 4.7% YoY in November, far above the bank's 2% target. It likely surpassed 5% in December, thus serving as a black eye for the Fed in 2021. 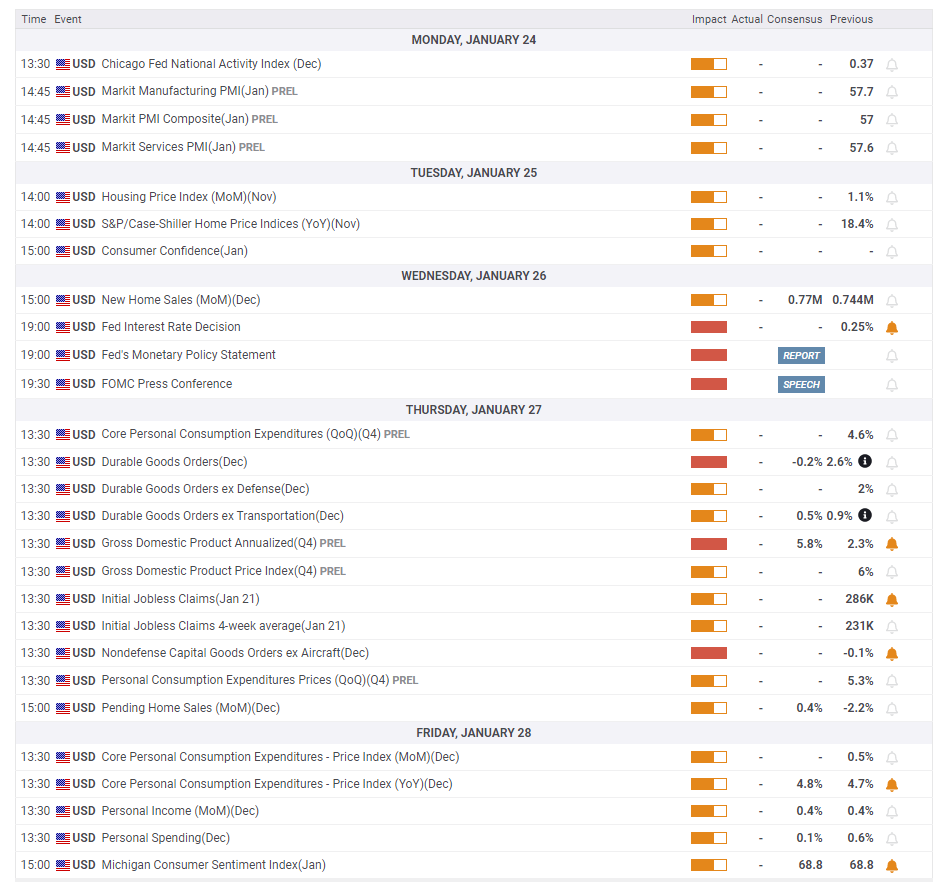 The packed economic calendar means covid could be sidelined, but the ongoing pressure on hospitals and consumers' fear of the disease has an economic impact – even without restrictions. Tentative signs of falls in cases would be welcomed. 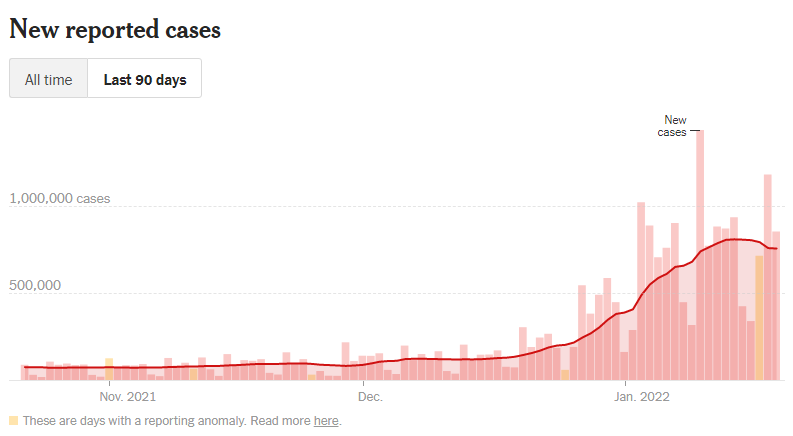 Pound/dollar has retreated from the highs, making the much-needed correction. While that may imply another bullish run, the picture is more nuanced. Upside momentum on the daily chart and trading above the 50-day and 100-day Simple Moving Averages means a rally. However, GBP/USD has yet to conquer a downtrend resistance line, nor the lost steep uptrend support one. Another cause for a pause is the failure to hold above the 200-day SMA.

All in all, bulls are in the lead, but only just.

Some resistance awaits at 1.3560, which capped the pair in October and mid-January. The round 1.37 line is a more significant cap after playing a role in both directions in recent months. The 2022 peak of 1.3750 is a critical upside barrier. Breaking above that line would open the door to 1.3840.

A dovish twist from the Fed could trigger the next upward move, which would also be backed by speculation about a hawkish BOE. Monetary policy divergence will likely overcome worries about global growth, coming from US GDP, the virus or geopolitics.

The FXStreet Forecast Poll is pointing to further declines in GBP/USD. Experts have collectively downgraded their forecasts, expecting the pair to hit the 1.33 handle in the three-month horizon. 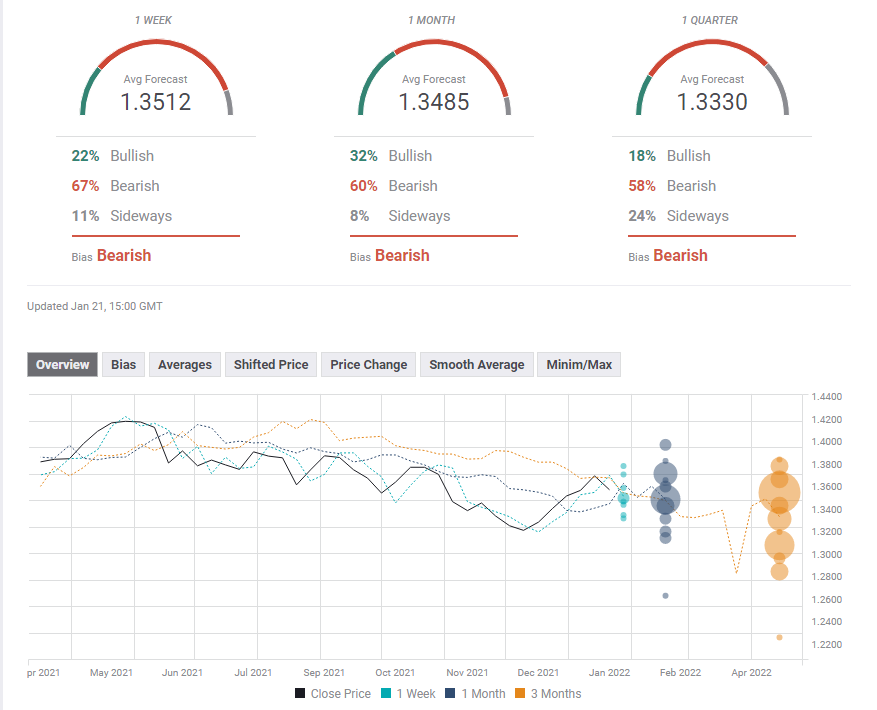