Has fear of the Fed gone too far? That is the question one poses when coming to trade the Federal Reserve's first meeting of 2022. While the world's most powerful central bank does not publish new forecasts, it may still tweak policy and rock markets by providing fresh comments on the economy. Hints about the next move are even more critical.

A rate hike in March is guaranteed and so are a total of four increases to borrowing costs in 2022 – that is what bond markets are saying, at least at the time of writing. This is more hawkish than the Fed's latest projection of three hikes this year, but it is based on several factors. One is that several officials said so.

Another argument in favor of more aggressive policy is rising inflation. While the headline Consumer Price Index "only" met expectations with 7% YoY in December, it is still the highest since 1982. More worryingly for the Fed, core prices were up 5.5% in 2021, far above the bank's 2% target.

Another reason to raise rates aggressively and even to sell bonds – aka Quantitative Tightening (QT) comes from the drop in the unemployment rate to 3.9%. That is a low level in absolute terms, and nearly at the pre-pandemic trough. The Fed has two mandates: price stability and full employment. 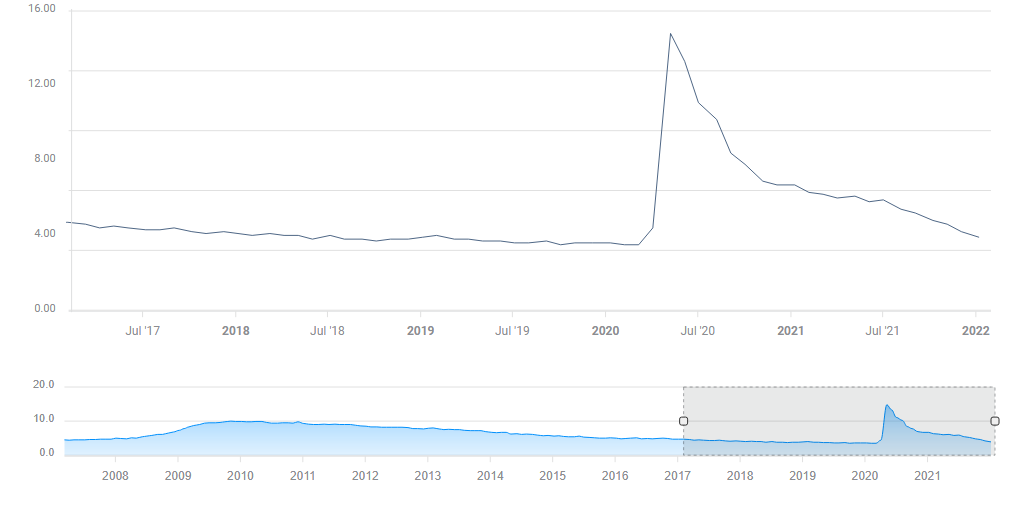 However, there are other indicators that may paint a different picture.

Starting with the labor market, while the unemployment rate dropped, the number of new jobs gained has materially slowed. Nonfarm Payrolls returned to pre-pandemic levels in the past two months, while participation has yet to return to normal.

The low jobless rate is also a result of lower participation

Another concern is that growth has materially slowed, with higher prices already curbing expenditure. Some say that "the cure for high prices is high prices" – consumers adapt by buying less, thus pushing prices lower. Retail sales tumbled, and that may cause the Fed to pause. 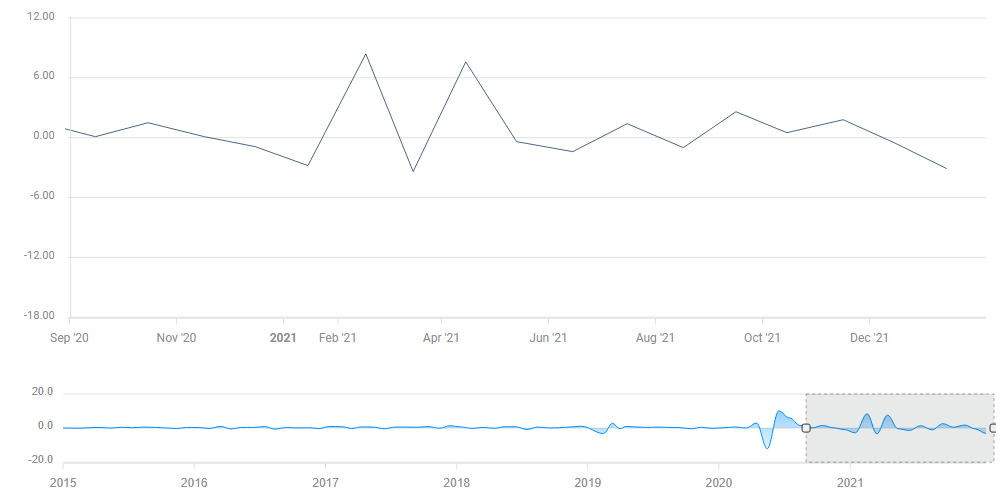 Another chart to look at is the stock market, which is part of what the central bank calls "financial conditions." Critics say the Fed works for Wall Street. Perhaps the cure for the recent slump in stocks is fresh support in the means of promising to keep the recovery going.

Even if the Fed eventually acts aggressively to counter inflation, these are all good reasons to convey a calming message, similar to the one Fed Chair Jerome Powell sent in his renomination testimony. This time, it is also about action, not only words.

How could the Fed and Powell soothe markets?

1) No early end to tapering: The Fed ends its bond-buying scheme in mid-March and some expect the bank to react to higher inflation by cutting the taper process short – ending purchases in January. While that would only mean 30 billion fewer dollars amid a balance sheet worth roughly $8.8 trillion, it would send a hawkish message.

By allowing for another month of dollar-printing, the Fed would signal patience and confidence. It would help stocks and weigh on the dollar. The only caveat to such a move would be if there would be more than one dissenter against such a move.

2) Emphasizing recent weakness: Powell has been generally content with economic progress, and one way to calm investors would be to put more emphasis on risks. By highlighting weak retail sales or an increase in joblessness, he would convince Americans that the Fed is aware of signs of weakness. For investors, it would mean more easy money.

Powell recently said it would take two to four meetings to discuss a policy about the balance sheet, and he will likely refrain from providing early hints. However, by pointing to weakness, he could avert a surge to withdraw funds from markets – a positive message for stocks, adverse for the dollar.

3) No commitment on hikes: Several hawks on the Fed suggested four hikes in 2022 and one, Governor Christopher Waller, even mentioned five moves. Waller is a voter. Chair Powell, however, never committed to four, nor to "lift-off" in March.

With bond markets certain of a rate hike before spring officially starts, Powell may lift investors' moods just by refusing to make such a commitment. Reporters will undoubtedly ask him about the next meeting, expecting a statement such as "we are coming around to a lift-off." Not saying something is no less powerful than spelling it out.

The mix of worrying economic signs and jitters in markets will likely push the Fed to send a dovish message in its January meeting. That would send the dollar down, especially if the bank is united around a cautious approach.