Currency trading is all about relative strength – and in sterling’s case in 2022, relative weakness.

The UK kicked off 2021 with an advantage – it secured more vaccines than its peers in the West, and its population seemed enthusiastic to get jabbed. That advantage was closed by Britain’s peers, and in 2022, most of the world will have access to immunization.

While the disease is global, other issues like Brexit, monetary policy, and fiscal moves are local. The bullishness of the Bank of England could prove temporary and backfire, while other matters may leave the monarchy behind.

Here are the factors set to move sterling in 2022.

“Are we there yet?” That is the question that children ask their parents on a long road trip and the question that annoyed investors ask when they hear Brexit headlines. The upcoming year will likely be no different.

When Britain officially left, the answer should have been “it’s done” in January 2020. January 2021 was when the transition period ended. However, over five years after the referendum, Brexit is here to stay.

In general, no news is good news about Brexit, and these items could lurk from the shadows.

It could choose two, but not three, as Ireland is part of the EU. The then-PM Theresa May opted for an open border in the Emerald Isle and no customs border between GB and NI, thus agreeing to the controversial “backstop” that kept the UK in the EU’s customs sphere. She preferred options 2 and 3 at the expense of 1.

Her successor Boris Johnson took a different approach – knowing that his party members preferred getting a “full Brexit” over holding onto NI, he agreed to special rules for NI, creating a customs border in the Irish Sea.

However, he changed his mind. Practical trade issues have also been in play, convincing the EU and the UK to renegotiate the NI protocol through 2021. There is no solution at the time of writing, and the problem is kicked into 2022.

Between these two extremes, 2022 could repeat the 2021 scenario – ongoing talks and disgruntled headlines from both sides of the Channel. That would erode any sterling strength.

2) Lack of forums to resolve issues: Another Brexit clash in 2021 was a row over fishing rights. While it is a minuscule industry, France and the UK seemed to enjoy clashing over this highly emotional topic.

Will fish feature in 2021? Perhaps, but the greater trouble comes from a lack of international forums to defuse minor disagreements. PM Johnson and his colleagues wasted precious time in G-20 and NATO meetings to discuss issues that could have been resolved in regular talks. Brexit means there are no forums to resolve such topics before they snowball.

Next time it could be another topic that sinks sterling. On the other hand, if a new mechanism is agreed on, some kind of “red line” could eventually prove pound-positive.

3) Equivalence: UK financial regulations are at “equivalence” with EU ones, allowing companies to adhere to one set of rules rather than two separate regimes. The Brexit deal focused on goods, not services.

However, the point of Brexit is that Britain could make its own rules and compete internationally. The romantic idea of “buccaneering Britain” or “Singapore on Thames” still curries favor in Westminster – most senior officials are Brexit supporters.

Although 2021 was still dedicated to minor Brexit issues and fighting covid, 2022 could be when the UK goes its own way. Losing “equivalence” would make the country less attractive to investments while maintaining the current status could cause trouble within the ruling Conservative Party. Investors prefer equivalence, but any doubts about it could weigh on sterling. The topic has been under the radar so far.

BOE – Being the unreliable boyfriend is better

Reporters called Bank of England Governor Andrew Bailey an “unreliable boyfriend” after the institution refrained from raising interest rates in November. The derogatory term had previously been used against Mark Carney, Bailey’s predecessor. The pound fell sharply after that decision and never fully recovered.

Being that pretty boy who promises the moon and then disappears, if that is the description relevant to the BOE, could prove better for the pound in 2022 than in 2021.

How? Bailey and his colleagues preferred to wait for data from the labor market following the end of the furlough scheme and could point to virus variants if they decide to only moderately tighten in 2022. Outside the short-term, providing more economic support could prove positive for the pound.

The BOE may turn from an “unreliable boyfriend” into the “favorite son-in-law” in 2022 by raising borrowing costs to fight inflation. It may also want to be seen as halting the rapid increase in Britain’s property prices.

It would be easier for Bailey to follow his Federal Reserve counterpart Jerome Powell in raising rates rather than going it alone. It would put the pound in an advantageous position against some other currencies. It could, however, also prove temporary.

Britain’s economy is not roaring like America’s and could suffer headwinds from both Brexit (see above) and fiscal tightening (see below). Moreover, it could have little effect on the housing sector or energy prices, both influenced by external factors.

Raising rates too fast could backfire by prematurely choking the recovery. In the first half, dollar strength related to expectations for a Fed hike could mask any damage from a rate hike in Britain. Later in the year, softer UK growth could haunt the pound and force the BOE to reverse course.

Fiscal and other issues

Boris Johnson is not Margaret Thatcher. While both PMs hail from the same Conservative Party, the 1980s leader went all-in on having a smaller state, while the current resident of Downing Street seemingly has different plans.

Johnson’s 2019 landslide victory owes to crumbling the “Red Wall” of northern constituencies that have traditionally voted Labour. Apart from appealing to their disgust with the Brexit deadlock, he promised to improve their economic status and “level up.”

The PM seems keen on reforming social care and even raising taxes – with the full backing of this Thatcherite Chancellor of the Exchequer, Rishi Sunak. Parliament has already approved an increase in payroll taxes in 2021 and could take further steps in 2022.

By hiking costs for the rich to boost social welfare and the National Health Service, Johnson is pulling the rug from under the opposition Labour Party. He is also diverting attention away from scandals that refuse to disappear from the headlines. In 2020, it was his senior adviser Dominic Cummings that gave Johnson trouble, and in 2021, it has been a sleaze scandal involving a prominent Brexiteer.

It is hard to believe that 2022 would be a “clean” year for the embattled PM, and opting for popular policies could be an excellent solution to garnering the positive media attention that he cares so much about.

For investors, higher taxes to fund popular schemes would be disappointing, adding more pressure on the pound.

In 2022, the disease first discovered in 2019 will likely remain on the agenda, yet hopefully only as a minor nuisance rather than a major issue. Any new outbreak would be positive for the dollar while better treatments and more efficient vaccines would weigh on the safe-haven greenback.

This reaction mechanism has already suffered glitches in late 2021, however, when the Omicron variant caused different responses in different currencies. The dollar had a better correlation with bond yields regarding majors. Against commodity currencies, the greenback was inversely correlated to stocks.

It is hard to say how the dollar will react to each covid wave and each promising news release in 2022. However, expecting weaker responses in the broader mood – and the dollar – would be a safer bet. Vaccines are set to be aplenty for developing countries, not only developed ones.

Another issue that could negatively impact GBP/USD is snarled global supply chains. Indications as early as November 2021 suggest some easing in the shortage of chips and shorter queues of ships at major ports. The world is adapting to living with the pandemic and is coming to terms with the post-pandemic dearth of specific goods while services see weaker demand. 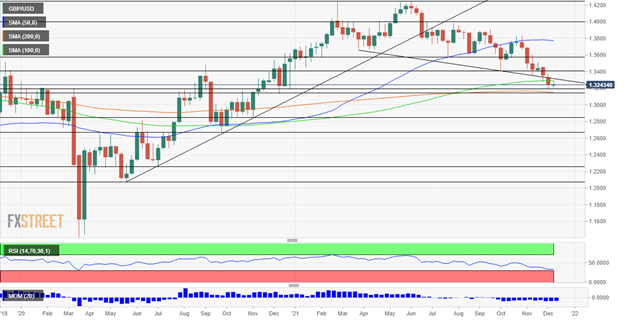 Bears are in control, but 1.3150 may prove a critical make-or-break point. That is the picture that the weekly pound/dollar is sending traders.

Momentum is to the downside, and the pair broke below the 50-week SMA, and more recently under the 100-week SMA and a slippery downtrend support line.

The 200-week-SMA converges with 1.3150, which also provided support in late 2020. If GBP/USD approaches 1.3150 rapidly, the Relatively Strength Index could tumble under 30 – entering oversold conditions. The last time such an event occurred on the weekly chart, sterling started to soar back up, during the darkest days of covid.

Looking up, recent swing lows serve as resistance lines. These include 1.34, 1.3595 and others. However, the most significant line is 1.40 – both a psychological barrier and a resistance line from the summer of 2021. It is followed by 1.4240, which is a double-top.

Lingering Brexit issues, along with premature monetary and fiscal tightening could tilt sterling down. While dollar strength may mask the pound’s weakness early on, the downtrend in GBP/USD could turn more significant later in 2022.

Gregor Horvat projects a possible bearish correction for the pound/dollar pair on his Elliott Wave analysis:

Cable recovered above the upper wedge resistance line which normally suggests a reversal, but pair can see a pullback to 1.25 in 2022 where broken trendline can become a strong support. Recovery above 1.4387 opens door for 1.59.

UK will be pushing rates sooner rather than later. The Brexit drag will beging to diminish

The US Federal Reserve have made it quite clear that they will start their bond purchase tapering at the end of March, 2022 and that we should expect 3 Interest Rate rises in 2022. However, the Bank of England seems to be ahead of the Fed when it comes to fighting inflation.

BOE is likely to hike its policy rate faster than the Fed and help GBP/USD edge higher toward key 1.4000 resistance. Easing price pressures are likely to cause the pair to turn south in the second half of the year.