Yesterday’s signals were not triggered, as there was no bearish price action at 1.3000.

I wrote yesterday that there was no change to the technical picture due to the trend lines holding and the market remaining relatively quiet. I thought that we may see movement due to U.K. data and any possible political developments there over Brexit. However, I also saw the line of least resistance as downwards.

This wasn’t such a good call, as very positive British economic data caused the price to rise very strongly and break clearly above all the trend lines and the psychologically important 1.3000 level. The price now seems to have settled at about 1.3050 and this is a bullish sign though we are still a couple of hundred pips or so off the highs of recent days and weeks.

It is hard to say where the price will go over the short-term, but the line of least resistance now looks to be upwards, so the bulls seem to have an edge. I would be bullish if the price is trading at or above 1.3100 at 9am London time, at least until the next resistance level at 1.3161 is reached. 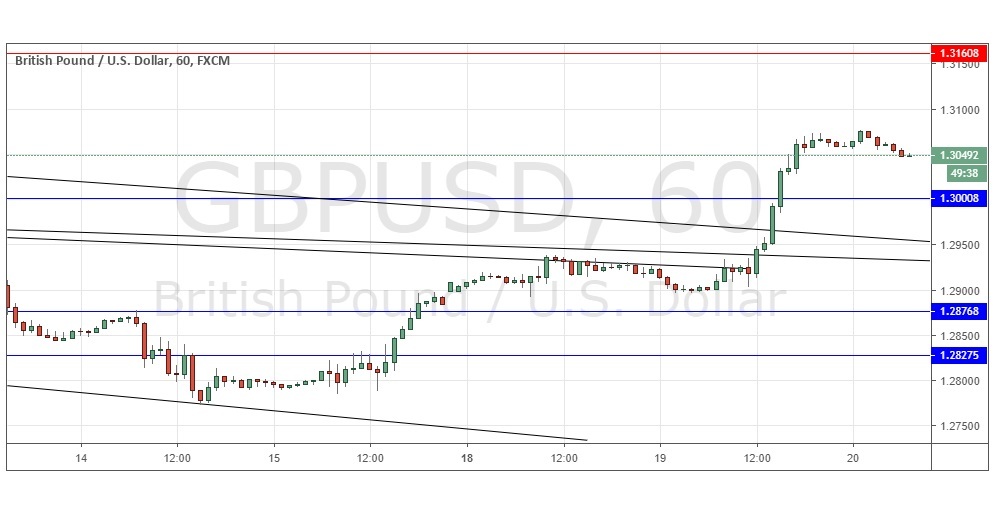 There is nothing of high importance due today regarding the GBP. Concerning the USD, there will be a release of FOMC Meeting Minutes at 7pm London time.