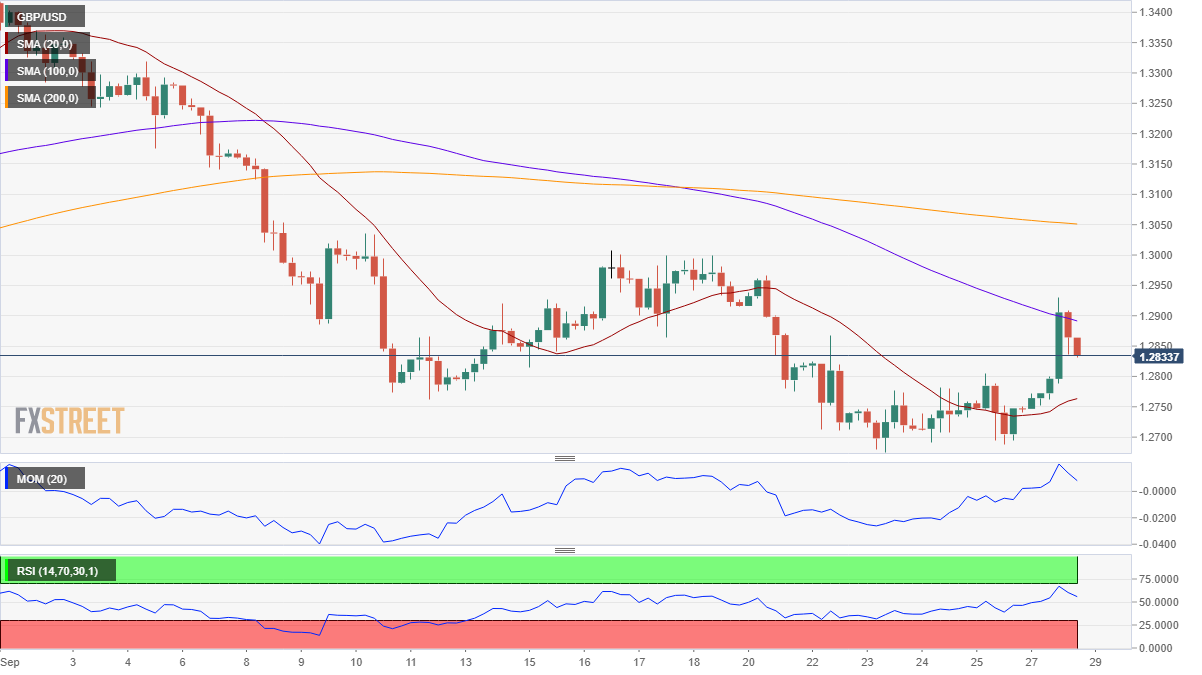 Pound longs returned with a vengeance this Monday, driving GBP/USD to 1.2929 its highest in almost a week. The pair got boosted by mounting hopes for a UK-EU trade deal, as representatives from both economies head into the ninth round of talks with cautious optimism. UK PM Johnson’s spokesman stated that a deal is still possible while there remains much to be done. The British currency found additional support in comments from BOE’s Ramsden who dismissed chances of using negative rates in the near-term.

The UK macroeconomic calendar was empty at the beginning of the week, and this Tuesday it will offer some minor figures, as the UK will publish Mortgage Approvals and money data from August.

The GBP/USD pair is trading around 1.2835 at the end of the day, as the dollar recovered some of its attractiveness in the last trading session of the day. The 4-hour chart shows that the pair was rejected by selling interest aligned around a bearish 100 SMA, currently at 1.2900. The 20 SMA gains some bullish strength below the current level, while technical indicators retreat from overbought levels but hold above their midlines. Overall, the upside remains favored, as long as Brexit-related hopes persist.

EUR/USD under pressure around 1.1850 amid US election concern

EUR/USD is under some pressure around 1.1850 the anti-risk dollar is drawing haven bids on reports of meddling in US elections and fading prospects of an imminent US stimulus deal. US jobless claims are eyed.

GBP/USD is trading well above 1.31, consolidating its gains as intense Brexit talks restart in London, aiming to reach an accord by mid-November. Rising UK coronavirus cases and political uncertainty in the US are keeping the safe-haven dollar bid.