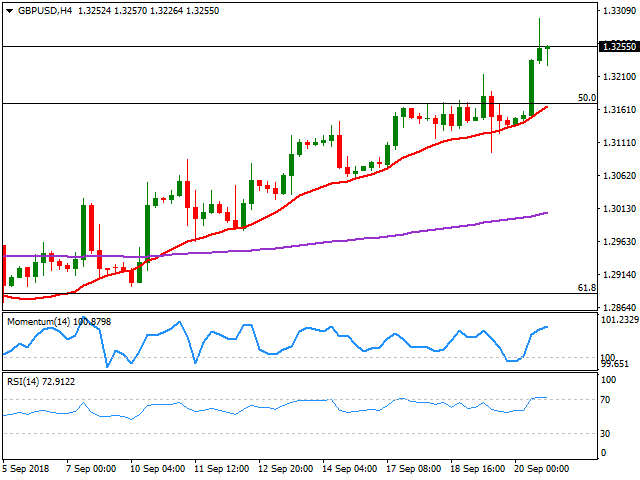 A soaring Pound led the way lower for the greenback across the board after the GBP/USD pair broke above the 1.3200 threshold, following upbeat UK Retail Sales. Sales rose 0.3% in August against forecasts for a 0.2% drop, and by 3.3% when compared to a year earlier, much better than the 2.3% expected. Furthermore, July readings were upwardly revised to 0.9% and 3.8% respectively. Dollar's sell-off exacerbated the advance, resulting in the GBP/USD pair reaching 1.3297, its highest early July. The Sterling's rally was cooled down by Brexit headlines, and nor the UK, neither the EU wants to give up on their stances on how to deal with the Irish border issue. UK P, May said that there can be no withdrawal agreement without an Irish backstop, and they are preparing for a no-deal scenario. German Chancellor Merkel, on the other hand, said she doesn't want the EU to compromise with the UK on access to the domestic European market.

The GBP/USD pair trades some 40 pips below the mentioned high ahead of the Asian opening, consolidating 100 pips above its previous comfort area. In the 4 hours chart, the pair broke through a major Fibonacci level with a long candle, a sign of strong buying interest, with the 20 SMA now hovering near the mentioned Fibonacci support at around 1.3170. Technical indicators in the mentioned chart have lost upward strength and are currently flat in overbought territory, without indicating a possible upcoming decline, but rather suggesting a new leg higher for this Friday.