We expect the impact of the Scottish elections on GBP to be very limited. Regardless of the result, most don't expect an imminent vote on independence. Given a second referendum (if one happens) is probably years away, there's limited need for such a risk premium to be priced into sterling. GBP currently trades cheap vs EUR, also suggesting a limited downside.

The elections and the likelihood of a second referendum

Scottish voters go to the polls this Thursday in what’s likely to mark another step in the push for a second referendum on independence. Here are the key things to consider:

What’s being voted on? Voters are taking part in a Scottish Parliamentary election, and the key question is whether the Scottish National Party (SNP) manages to gain an outright majority. The party fell slightly short in the 2016 election, and recent polls suggest it’s a close call again. But even if the SNP fails to gain a majority this time, there is talk of some form of coalition or agreement with the Greens, which are also pro-independence. In other words, the result is likely to lead to renewed calls for a second referendum.

How likely is a second referendum? As things stand, the government in London needs to give its consent to another referendum, and there’s little sign that Prime Minister Boris Johnson will do so. In theory the question of who holds the power to allow a vote could ultimately be tested in the courts. But barring a surprise legal outcome, an imminent referendum is unlikely, though a further refusal by the UK government to allow a vote may potentially spur further pro-independence feeling in Scotland. The issue is likely to play a key role in the next UK-wide general election in 2024, assuming a referendum hasn’t been granted before then.

What do the polls say now? The pandemic saw ‘yes’ take a considerable lead in the polls for the first time since the first referendum back in 2014. This can be put down to perceptions about how the UK and Scottish governments handled the Covid-19 crisis, particularly the second wave. But over the past few weeks, that lead has evaporated and Scots are virtually 50:50 on the issue again. Some have linked this to sentiment surrounding the vaccine rollout, alongside internal disputes within the SNP/pro-independence movement.

As we discussed in GBP: Reaping the vaccine dividend, although the Scottish election may bring back negative headline news about another Scottish independence referendum, we don’t think this should have an overly negative impact on sterling. This is because (a) a referendum could be years away rather than months (even if pro-independence parties win a majority – as discussed above); (b) as we observed with the Brexit referendum, the risk premium started to be built into GBP only six months ahead of the event; and (c) the first Scottish referendum in 2014 did not translate into a material build-up of GBP risk premium, as evident in Figure 2.

Figure 2: The first Scottish referendum had a limited impact on GBP 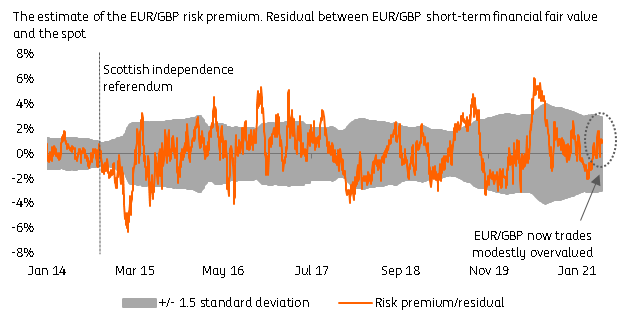 Moreover, we also note that the pound currently trades cheap vs the euro following the rather tough month of April for GBP where sterling suffered from the double whammy of concerns about the AstraZeneca vaccine suitability (early April) and domestic political scandals about the financing of PM Johnson's flat refurbishment (late April). This brought EUR/GBP into overvalued territory, by around 1.5%. With GBP already screening cheap after its wobbles in April, this should add to the notion of a limited downside to the currency coming from possible negative headline news from the Scottish election.

In our view, the speculative positioning is the main technical vulnerability for GBP at this point. GBP is currently the biggest G10 FX speculative long as measured by the CFTC data. However, we have already seen some adjustment lower (from 21% of open interest in early March to 15% currently) and with the UK economy likely to see a meaningful recovery this quarter, we expect GBP to remain one of the biggest longs in the G10 FX space for now. 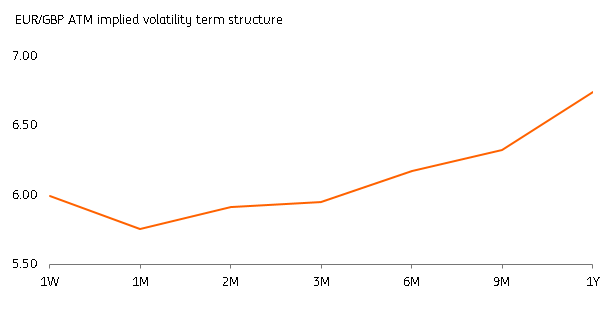 It does not come as a surprise that the event risk also looks to be priced in by the options market (as per Figure 3, the front-end part of the EUR/GBP implied volatility curve term structure is currently inversed and showed a modest kink last week), but the option premium is not meaningful while the bulk of this event risk has more to do with the May Bank of England meeting (also on Thursday) rather than the Scottish election (where results will be out on Friday). This is in line with our view that the event risk is modest and should not be overestimated – for the reasons above.