The Fed is having its July monetary policy meeting, one of those "non-live" ones with no fresh forecast and a press conference scheduled, which means it will likely have a lesser impact on the market. This time, the US central bank is largely expected to remain on-hold, with the market sort of disappointed about the latest monetary policy developments in the country, exacerbated by political jitters. Softening inflation figures during the second quarter of the year cooled down expectations of a steady pace in monetary tightening, despite the Fed had steadily repeated that the setback in inflation was due to temporal factors, giving no signs of being worried about it.

Prospects for a tighter monetary policy in Europe and with Canada having already hiked rates, have further eroded dollar's advantage in that front, while the political uncertainty generated by the new administration did the rest. Markets are no longer talking about a tax reform, which was supposed to get into the Congress this summer, but is not out of the spotlight as US President Trump is still struggling with the health-care reform bill.

Speculative interest will probably focus on comments related to reducing the Fed's $4.5 trillion balance sheet and if there's any clear date or scheduled on how they will proceed on the matter, but also on how hawkish/dovish the statement is. The problem, however, if the market will buy a hawkish stance, considering data has been tepid, to say the least. Unless inflation in the US changes course and accelerates higher, there's a bumpy road ahead for the greenback, regardless what the Fed may or may not say, and that won't happen today, nor tomorrow.

Dollar's broad weakness will likely persists and will likely happen something similar to what happened with the ECB last week: the market will only listen what it want to hear. The most likely scenario is that the market will disregard confident comments on inflation, and take the thinnest negative line to sell back the greenback, as it took Draghi's forced statement that policy makers will discuss their monetary policy next fall, to buy the common currency. 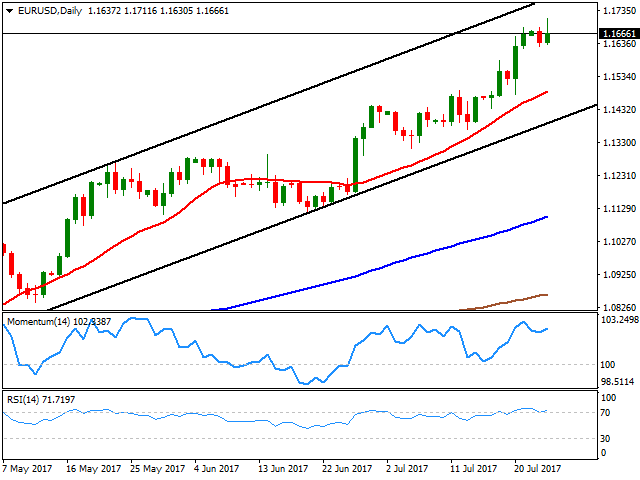 The EUR/USD pair stands at its highest since August 2015, having hit 1.1711 before retreating on profit taking ahead of the event, rather on upward exhaustion. The 2015 yearly high was 1.1713, and a break above the level could see the pair approaching to the 1.1800 figure, where the pair has the 200 SMA in the weekly chart, and the top of the current bullish channel. Around this last, the pair also has the 38.2% retracement of the 2014/2017 slide, making of it a critical long-term breakout point. Steady gains beyond the level, open doors for a test of the 1.2000 threshold. To the downside, the pair has supports at 1.1580 and 1.1500, but it will take a clear break below 1.1460 to call for an interim top, and further slides ahead.