Will somebody stop them!

There is a bit of chat on the newswires today following the Fed minutes overnight - though they don't particularly challenge our house view that we will see another rate cut in October, even if the subsequent December cut may require clearing some higher hurdles.

Greater prominence is given to discussion about the Fed's longer-term strategy for monetary policy, and it is on this that I will focus today.

Some years back (I think it may have been 2012, when this note was published), the US Federal Reserve supplemented its dual targets (already an odd concept) for maximum employment and price stability, by adding an explicit goal to that price stability target. That was PCE inflation of 2%. There has since been a bit of flux over whether or not it is the core rate or the headline rate that they target. Officially, it is the headline, but the core seems to be substituted when it suits them, and I see nothing particularly wrong with that.

The Fed's current discussion on monetary policy (and other central banks facing similar issues) is driven by the concern that in the next downswing, they may once again be faced with having to cut interest rates to zero, or re-adopt unorthodox monetary policies. Meanwhile, they continue to fret that they are missing their 2% inflation target. In their minds, it seems that missing this target raises the probability of the next downturn, and so they are considering efforts to push inflation up, as a means to avoiding that outcome.

This is entirely the wrong approach in my view.

Yesterday, I slated a BIS paper on unconventional monetary policy, which seemed to indicate that such unorthodox policies were, by and large, OK, albeit with some minor financial wrinkles to try to minimize. Quite by accident, I also came across a working paper by another group within the BIS called "Monetary policy hysteresis and the financial cycle" , which models an economy with bank financing (realistic but unusual) and drew highly plausible conclusions that low rates beget further low rates. In other words, their model describes the world we live in, where the pursuit of the unattainable with low rates leads to financial distortions, crises, and then even lower rates. It is a pattern that has been repeated since LTCM, the savings and loan crisis, dotcom boom and bust and most recently the global financial crisis. We seem to have learned nothing from each cycle and are trying to repeat it again now. If there is concern that rates now are low, the reason for this is that they were far too low in previous cycles. Cutting them further now merely buys some time before the next lurch down, and even lower rates.

The basic problem is that modern central banks have made the inflation target an ultimate goal when it was only ever an intermediate goal. There was a time when a monetary policy stance consistent with an economy running fast enough to generate 2% inflation, would also generate sufficient jobs to lead to full employment. It would also allow for credit growth sufficient to allow asset prices of all sorts to grow and "net" wealth to grow consistent with accumulated nominal GDP growth (the economy's P&L account). The inflation target was not the goal itself, the other elements were, but hitting the inflation target, on average, would help deliver those other goals.

Even so, in the 225 months since January 2000, the US PCE has met, or exceeded 2% in only 88 months. That is less than 40% of the time. The proportion is considerably less (less than 30%) if we use the core PCE, as most of these increases occurred between 2004 and 2008, when oil prices soared to $140/bbl from about $30/bbl. This doesn't mean that monetary poilicy was too tight - merely that the target was the wrong number.

Using the core PCE deflator, the sum of the annual inflation misses over the period since January 2000 has been more than 5 percentage points. According to a view encouraged by the Fed's Richard Clarida, when the Fed misses its target, it should not consider this a "bygone" as it currently does, but instead, try to make up for that loss. For a policy that met the inflation target on average but missed it randomly, this might entail far more, smaller adjustments, and it is not clear that this would deliver a more stable inflation outcome, or instead, add greater volatility.

But when inflation regularly undershoots the inflation target, as it has done since before even the current target was adopted, then this implies running an even looser monetary policy on average. That means we would have had even easier monetary policy before every bubble since we would have been making up for missed targets earlier, and most likely, more negative rates afterwards, as the burst bubbles would have been even more severe. In other words, it sounds a lot like the model paper I mentioned earlier. Do please give it a read.

US Core PCE and inflation target 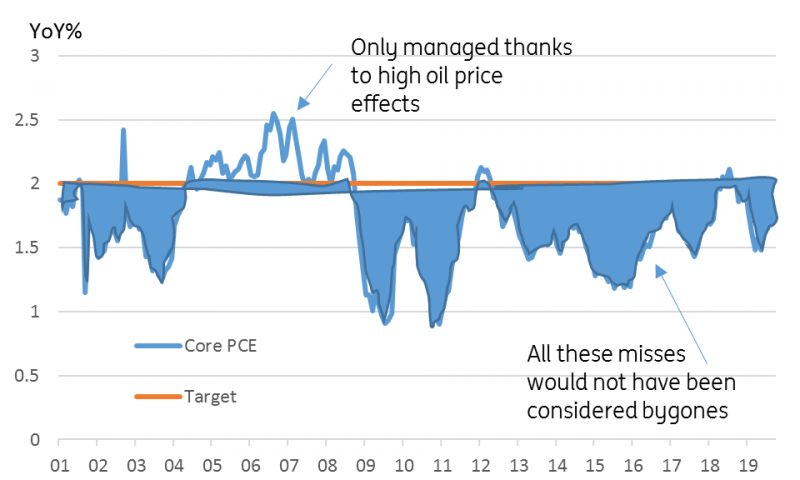 Focus on the goal, not the journey

If we instead focus on the ultimate targets, like the unemployment rate, which in the US is now at 3.5%, considerably below the 4.4% rate the Fed considered "full employment" back in 2012, the Fed's job would be done. There would be nothing to worry about. And in the process, it would be less likely that we would once again embark on a journey that will take us down the QE route, or negative interest rates, pushing up all asset prices and resulting in negative yields along yield curves, with all that these distortions entail.

In short, I am very concerned that the Fed and ECB and other central banks seem to be heading in entirely the wrong direction. I'm not even sure how they pull themselves back from here to a less dangerous policy mix. Raising rates is not the answer. The answer would have been not to run them so low in the past, but we can't undo history, even if we do seem doomed to keep repeating it.

The prize for some sort of trade deal today - no matter how trivial - will be to avoid the implementation of further tariffs, now due to land on October 15 and December 15. There are conflicting reports over how the talks are poised to go, with the South China Morning post reportedly suggesting the Chinese negotiators would fly back already tonight (I don't think this is new news), while Chinese state media are apparently taking a more upbeat tone.

I think that a "nothing achieved" outcome from today's talks would return markets to a risk-off mode fairly quickly, with USDCNY potentially pushing up, as US Treasury yields dropped down to begin a new downleg and possibly drop below the September lows.

Brexit deal - not looking good either

UK PM Johnson will meet the Irish Prime Minister for lunch today in what is looking like an increasingly desperate attempt to secure a deal. Recent news of widescale Conservative defections if the party campaigned on a no-deal ticket in a forthcoming election may have encouraged Johnson to look for any vestige of compromise that he could take to Parliament and hold up as an improvement on the Theresa May package. I'm not hopeful that such improvement exists. The outlook for the GBP does not look rosy.

China's money supply and lending data, which we thought might come out yesterday now look as if they will be released today. The calendar has already given us very weak Japanese core machine orders (August fell 14.5%YoY), and some soft looking Australian home loans data (0.7%MoM ion August). We may need to review our RBA view to allow for further easing (that doesn't mean we endorse it!).

In the G7, US inflation data is the top billing for the day. Core inflation on a CPI basis is 2.4%, and is expected to stay there. On this measure (which is what most other central banks target) the Fed has not only achieved its target, but strayed a bit beyond it...just saying...