The euro declined slightly on Tuesday after France announced a series of Covid restrictions. Some of these restrictions include shutting all bars for the next 30 days. Also, students will be required to wear masks when in and out of class. The announcement came shortly after the US cautioned citizens against going to France as the number of cases rise.

The currency also reacted mildly to the formation of the German government. Olaf Scholz will become the new chancellor after his party reached a deal with two other parties to form a government. He will officially be elected by the country’s chancellor on Wednesday. The euro also wavered after the IMF released an update for the Eurozone economy. In the report, the agency said that the bloc had moved to pre-pandemic levels. In a separate report, Eurostat said that the bloc’s economy expanded by 3.9% in the third quarter.

The Australian dollar rose after the latest Reserve Bank of Australia (RBA) interest rate decision and the positive China trade numbers. The RBA decided to leave its interest rates unchanged at 0.10% where they have been since the pandemic started. The bank also pledged to continue with its quantitative easing program until February next year. At the same time, the statement said that the RBA will be patient before hiking rates. In the previous meeting, the bank hinted that it will hike rates in 2024. Meanwhile, data from China showed that the country’s exports and imports did well in November. The two rose by 22% and 31.7%, respectively, leading to a trade surplus of more than $71.72 billion.

Global stocks, crude oil, and other commodities rallied as concerns about the Omicron variant eased. In Asia, the Nikkei 225 and Hang Seng indices rose by more than 600 points while in Europe, the DAX and FTSE 100 rose by more than 1%. Similarly, in the US, futures tied to the Dow Jones rose by more than 250 points. According to the New York Times, early studies show that while Omicron is spreading faster than Delta, it has less severe symptoms. The variant has already been detected in more than 30 countries on 6 continents.

The EURUSD pair was in a tight range after the relatively strong German industrial production data. It is trading at 1.1287, where it has been in the past few days. On the four-hour chart, the pair has formed a small falling wedge pattern. It has also formed an inverted head and shoulders pattern. The pair is along with the 25-day moving average while the Relative Strength Index (RSI) has moved lower. Therefore, the EURUSD pair will likely break out higher in the next few days. 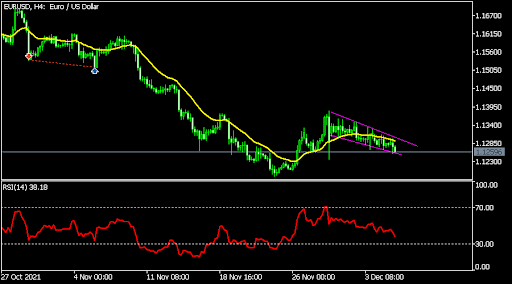 The USDCHF pair declined to a low of 0.9232 after the strong Swiss unemployment rate data. The rate declined to a low of 2.5% in November. On the four-hour chart, the pair is attempting to retest the key support at 0.9220, which was the neckline of the inverted head and shoulders pattern. It also moved slightly above the 25-day moving average. Therefore, it will likely retest the support at 0.9220 and then resume the bullish trend. 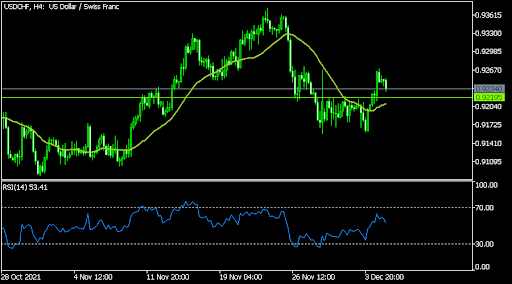 The AUDUSD pair rose to a high of 0.7095 after the latest RBA decision. This price was substantially higher than last week’s low of 0.700. On the four-hour chart, the price is approaching the upper side of the Bollinger Bands while the MACD has formed a bullish reversal pattern. The pair is also slightly above the 25-day moving average. Therefore, it will likely keep rising in the American session. 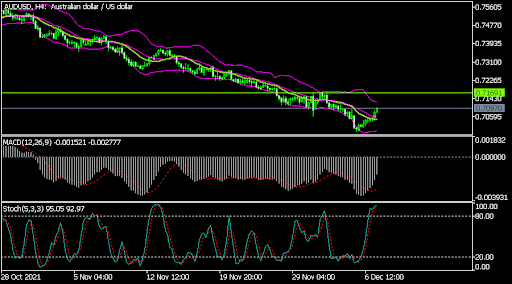