The uncertainty surrounding the January HICP release is larger than usual, as a range of different economic and technical factors loom with the turn of the year. Below we discuss some of the most important issues to be aware of and how they could influence price developments this year:

HICP component weights: The flash figures will bring the new component weights for 2023. Just like under the Covid-19 pandemic in 2020, 2022 saw big changes to ‘traditional’ consumption patterns and households on balance spent a larger share of their income on energy consumption during 2022 than in previous years. We expect the new HICP energy weight to rise to ca. 13.8% (compared to 10.9% in 2022), thereby magnifying the impact of energy developments on the HICP dynamics. Core and especially services could in contrast see its weight declining (see chart), but with a readjustment of weights in favour of recreational services. On balance, the higher weights for volatile items such as food and energy could further increase the volatility in HICP and increase inflation risk premiums. 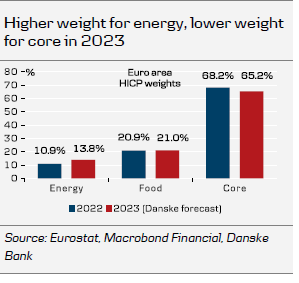 HICP country weights: With the turn of the year, the euro area has also gotten a new 20th member state. Croatia’s HICP share will probably be sufficiently small not to be a game-changer for the HICP dynamics, but with its inflation rate standing at 12.7% in December 2022 (above the euro area average), it could on balance be another proinflationary factor for 2023.

Menu cost adjustments: Firms are still in the process of passing-on higher input costs to consumers and many companies will likely use the turn of the year as an excuse to adjust prices to a new input cost reality. With the economy holding up better than expected, the environment for price hikes remains unusually benign, as also illustrated by continued high selling price expectations. This is especially the case for services, where increasing wage demands have yet to be fully reflected in prices.

However, not only core goods and services face menu cost adjustments. We expect that also many energy providers could seek another round of contractual price increases in light of the new reality in energy markets. This implies that the rise in wholesale prices observed in 2022 is set to exert continued upward pressure on retail gas and electricity prices throughout 2023 year as well, and the drop in HICP energy inflation could therefore lag the decline indicated by spot commodity prices in the market.

Fiscal measures: While government support measures succeeded in cushioning the blow from the energy crisis for consumers and firms, they also remain a distorting influence for the inflation dynamics. France, which froze gas bills in October 2021 and capped electricity price increases at 4% in 2022, will allow bigger price rises of up to 15% in 2023 and could therefore see another uptick in energy inflation in January. German energy inflation saw a significant decline in December 2022 due to a one-off government-backed discount on energy bills. That effect will drop out in January, meaning energy inflation could revert sharply, before the German gas and electricity price brake takes full effect in March and the decline in energy inflation repeats. Overall, we look for an uptick in euro area headline inflation to 9.6% in January (from 9.2% in December), as menu cost adjustments trigger another increase in core inflation to 5.4% (from 5.2% in December). An inflation upside surprise could bring a setback to the European fixed income rally, adding to the risk of more ECB hikes to come.

For the time being, lower energy prices and base effects, as well as government interventions are pushing down headline inflation. However, with a tight labour market and still elevated selling price expectations, high core inflation will likely remain a worry for ECB for some time yet. We still think markets are underestimating the ‘stickiness’ in underlying inflation and forecast HICP inflation to average 5.6% in 2023 and 2.6% in 2024, but with core inflation not returning to the ECB’s 2% target before H2 24.