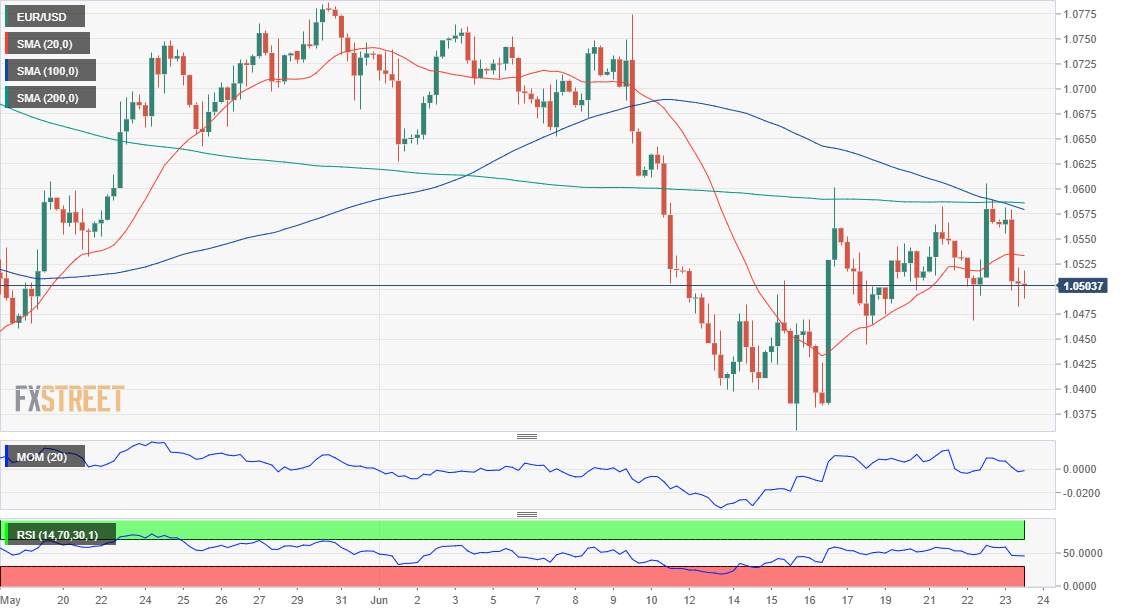 Risk-off returned on Thursday, pushing EUR/USD towards the 1.0500 price zone, where it currently trades ahead of the US opening. Comments from US Federal Reserve Chair Jerome Powell on Wednesday fueled recession concerns. Testifying before Congress, Powell acknowledged that hiking rates too fast lifts the risk of recession, yet at the same time, reaffirmed that policymakers believe the current pace of hikes remains appropriate. Chief Powell will testify again on Thursday before a different commission, but he is not expected to add much new to what he already said.

Further fueling the dismal market's mood, macroeconomic data hinted at an economic slowdown in the EU. The flash S&P Global PMIs for June painted a gloomy picture as EU economic growth deteriorated to a 16-month low, reflecting a stalling of demand growth. The manufacturing PMI contracted to 52, while the services index shank to 52.8 from 56.1 in May.

The picture was pretty much the same in Germany, as the report showed the economy lost momentum at the end of the second quarter while adding that "firms' expectations towards future activity slumped to their lowest since the first wave of the COVID pandemic over two years ago, with manufacturers growing increasingly pessimistic about the outlook." Germany's flash Manufacturing PMI printed at 52, while the services index came in at 52.4.

At the same time, German Economy Minister Robert Habeck announced the country would move to stage two of its three-stage gas plan amid reduced Russian flows. Ever since the war began in Ukraine, fuel shortages have been Europe's main concern. This particular phase does not mean state intervention, scheduled for the next one.

Demand for government bonds amid growth fears pushed yields lower, with the yield on the 10-year Treasury note currently at 3.10%. Meanwhile, European stocks are struggling to advance while Wall Street's futures hover around their opening levels.

The US has just published Initial Jobless Claims for the week ended June 17, which rose to 229K, while the Q1 Current Account posted a deficit of $ 291.4 billion, both missing the market's expectations. S&P Global will publish June US flash PMIs later in the day.

The EUR/USD pair is trading near a daily low of 1.0482, and technical readings in the daily chart point to another leg lower. The pair met sellers around a firmly bearish 20 SMA late on Wednesday, with the indicator currently at around 1.0600. Meanwhile, the Momentum and the RSI indicators head firmly south within negative levels, reflecting growing selling interest.

In the near term, and according to the 4-hour chart, the pair is neutral-to-bearish. It is currently developing below all of its moving averages, with the 100 SMA now aiming to cross below the 200 SMA. Technical indicators, in the meantime, seesaw around their midlines without clear directional strength. The pair has been meeting intraday buyers at around the 1.0480 price zone, now the level to beat to confirm additional declines.