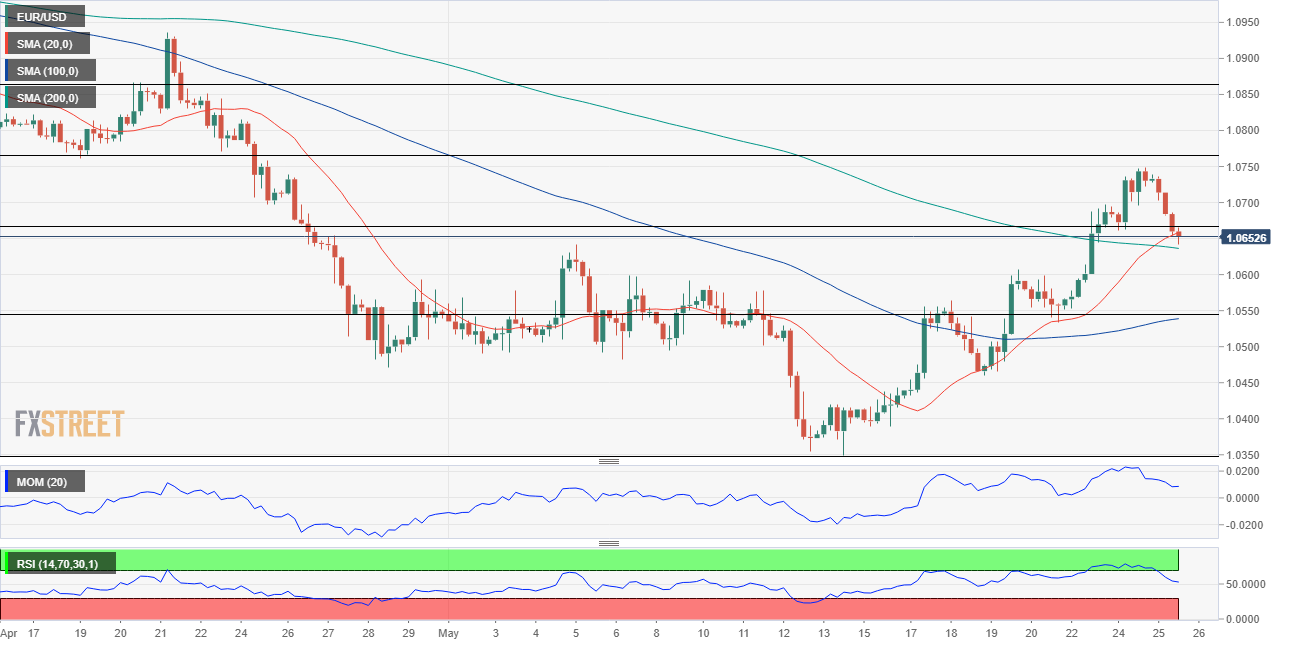 The American dollar strengthens on Wednesday as investors could no longer look beyond signs of slowing economic growth and lingering inflation. The EUR/USD pair eased from a weekly high of 1.0748 and trades in the 1.0650 price zone, not far from its daily low.

Additionally, market players are concerned about mounting tensions between the US and China after US President Joe Biden said that his country would militarily defend Taiwan in the event of a Chinese invasion.

The European Central Bank published the Financial Stability Review, which took its toll on the shared currency, as policymakers noted that "an abrupt increase in real interest rates could induce house price corrections” while adding that "further corrections in financial markets could be triggered by escalation of war, even weaker global growth or if the monetary policy needs to adjust faster than expected."

The dismal market mood was exacerbated by the release of US Durable Goods Orders, up by a modest 0.4% in April, below the 0.6% expected. Also, the March reading was downwardly revised from 0.8% to 0.6%. Later in the American session, the Federal Reserve will release the Minutes of its latest meeting. The document is expected to somehow confirm at least two more 50 bps hikes and to include further details on the balance sheet reduction.

The EUR/USD pair has retreated below the 38.2% retracement of its latest daily slide, measured between 1.1184 and 1.0348, at 1.0670. The pair neared the 50% retracement on Tuesday before giving up, suggesting the bullish correction may be complete. Further declines below 1.0545, the 23.6% retracement of the aforementioned decline should confirm so.

Technical readings in the daily chart, however, reflect the ongoing decline but fall short of confirming more slides. The 20 SMA is directionless at around 1.0540, reinforcing the Fibonacci support level, while technical indicators remain within positive levels, the Momentum stable, and the RSI heading lower.

According to the 4-hour chart, the pair is nearing a bearish setup. The pair is pressuring the 20 and 200 SMAs, after the shorter one crossed above, the longer one. Technical indicators, in the meantime, have turned sharply lower from overbought readings, still holding above their midlines with bearish slopes.