Continued weakness in the Japanese yen, has resulted in the EUR/JPY pair recovering within range, up to 115.32 last Friday, the highest in two weeks. The pair settled at 115.00, with the yen pressured by rising worldwide yields, although things may turn gloomy for the Japanese currency, as the Clinton-FBI affair will probably send investors into the safe-haven currency these upcoming days. Also, inflation in the country remains subdued, with core inflation back below zero in September for the first time since 2013. The news came a week ahead of the BOJ's economic policy meeting, and while the Central Bank is expected to remain on-hold, the background scenario is increasingly suggesting the need of more stimulus. From a technical point of view, the pair remains within the range defined late July between 112.00 and 116.35, now stuck around the 38.2% retracement of the post-Brexit's slump recovery. In the daily chart, the price has advanced above its 100 DMA, while the RSI indicator heads higher around 58, although the Momentum indicator has turned horizontal around its 100 level, limiting the upward potential. In the 4 hours chart, technical indicators are retreating from overbought territory, while the price has advanced beyond its moving averages that anyway maintain slight bearish slopes in the 114.00/30 region. 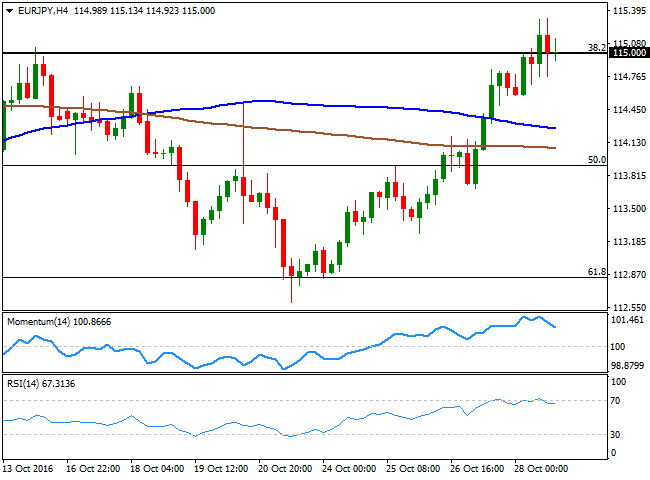