Last week we investigated nonperforming EU loans and an EU proposal to freeze accounts if a run on a bank starts.

Today let’s investigate the EU’s deposit insurance scheme with the likely result being a ban on cash.

For starters, there is no “banking union” to speak of. That aside, let’s explore the deposit insurance goal and where things are now.

The SRF pools contributions which are raised on an annual basis at national level from credit institutions and certain investment firms within the 19 participating Member States. These contributions are calculated on the basis of the methodology set out in the Commission Delegated Regulation (EU) 2015/63 and Council Implementing Regulation (EU) 2015/81 and are collected via the National Resolution Authorities (NRAs).

The SRF is being built-up over a period of eight years (2016-2023). The target size is intended to be at least 1% of covered deposits by end 2023. 3,512 institutions banks and investment firms have to contribute to the Fund.

That’s the entire press release, as written. The goal is to create an emergency “safeguard” that can only be used as a “last resort”.

The target goal is “at least 1% of assets” and it will take until 2023 to collect this reserve.

At hand right now the SRF has €17.4 billion in the emergency safeguard.

As noted last week, there are Over €1 Trillion Nonperforming EU Loans. 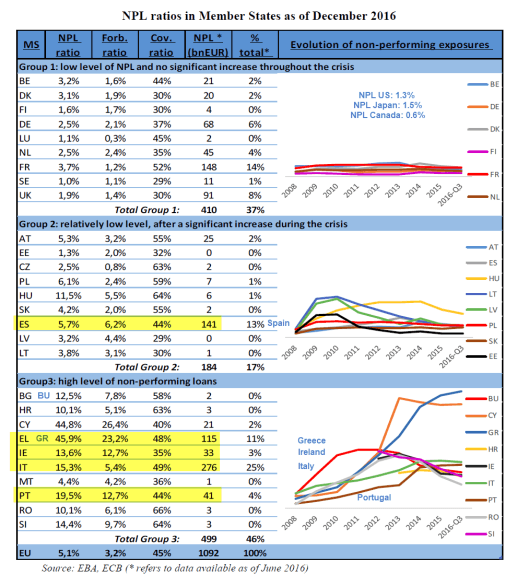 Italy alone has €276 billion in non-performing loans. Greece and Cyprus have NPL ratios of 46% and 45% respectively. Bulgaria, Croatia, Hungary, Ireland, Italy, Portugal, Slovenia, and Romania all have NPL ratios between 10% and 20%.

46% of loans Greek bank loans are non-performing. The Greek sum is a very significant €115 billion.

Here is the key sentence: “Nearly seven years, 13 austerity packages, and three bailouts (worth a running total of $366 billion) later, the Greek economy is still struggling.”

Not Greek citizens. Not Greet banks.

Rather, $366 billion was used to bailout Greek creditors, primarily Germany. 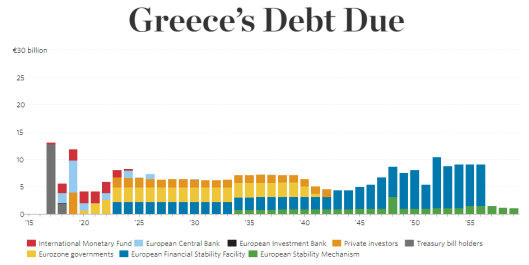 The odds that will happen are roughly zero percent.

Even if the Single Resolution Fund threw its entire emergency fund of €17.4 billion at Greece, it would not do a damn thing for either Greek debt or Greek non-performing loans.

SRF is a Joke

Simply put, the SRF is a complete joke. It’s only purpose is to pretend that something meaningful is taking place when clearly it’s not.

On top of it, a quick check of the Bundesbank Target2 Balance shows peripheral Europe owes Germany a new record high €860 billion!