This opening week for the earnings season will be focused on the finance sector and banks are shown with rather optimistic perspectives in the media with various reports scheduled by S&P 500 companies for the remainder of this week. For Zacks, the major bank industry, which accounts for approximately 45% of the financial sector’s total earnings, an increase in earnings of +11.2% is expected with +2.5% more revenue than in the last period. This would follow an earnings growth of +298.1% on revenue -2.1% lower in the prior period. For the financial sector as a whole, total earnings are expected to increase 19.9% versus a revenue increase of 4.9%.

Bank of America ( #BankofAmerica or BOA ) is an American multinational investment bank and financial services company, in addition to being the second largest banking institution in the United States after JPMorgan Chase. It serves approximately 10.73% of all US bank deposits, being the thirteenth largest company in the world by market capitalization with $368.4B. This large bank releases its Q3 earnings results and has an investor presentation today (Thursday, October 14) before the New York markets open.

The BAC mentioned in its latest reports that credit and debit spending experienced a 28% increase in the retail segments year-on-year, sharing the same data in food spending, while travel spending increased more than 220%. On the other hand, the number of mobile banking clients increased by 3%, reaching 40.5 million.

As shown in the following graph, the BOA has had an annual performance of 47.7% during this current year. 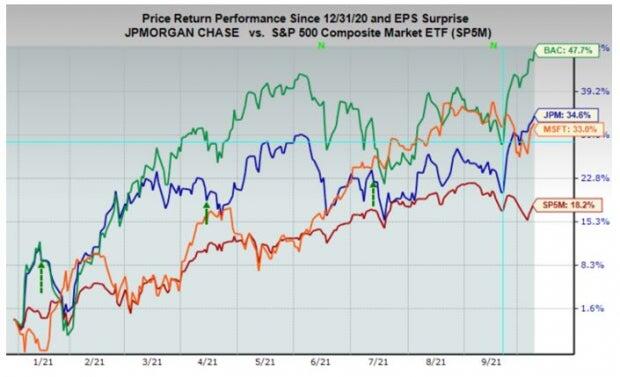 The BAC is in Rank #3 being a #HOLD from Zacks, which predicted EPS of $0.71 with a 0.69% probability of having a surprise positive EPS as it has done previously with an average rate of 16.9%.

The market is currently looking for evidence that loan growth has finally arrived. Net interest margin rose in the third quarter due to higher Treasury yields in September. The growth of branches, the improvement in digital and online banking, along with the success of Zelle (a convenient way to send and receive money from people you trust or to virtually anyone with an eligible bank account in the US using their address, email or mobile number), in addition to the increase of 2,200 ATMs to the network, have all allowed cross-selling of products, including mortgages, auto loans and credit cards, and will continue to support profitability.