The US dollar has crashed below its uptrend line as its bullish narrative has once again been called into question. The shockingly big miss of the April NFP estimate has proven the Fed right and the markets wrong on the economy. Subsequently, the dollar has been knocked off its pedestal as investors have pushed back the timeline of when the Fed will begin to taper. But apart from a brief spike, Treasury yields have mostly stuck to their recent range. So why is the greenback on the defensive? Rising inflation expectations are the culprit as they are depressing real yields. But does this mean it’s only a matter of time before nominal yields catch up with soaring inflation expectations, or will price pressures subside before long, proving the Fed right on this too?

A misalignment of expectations

Fed Chair Jerome Powell has been saying all along that he wants to see “a string of months” of roughly one million jobs being created before there can be “substantial further progress” in the recovery. The April nonfarm payroll report was a reminder for investors that the healing of the economy indeed has a long way to go. Although there were a number of seasonal factors that can be attributed to the unexpectedly small jobs gain, as well as some blaming the overly generous unemployment benefits that are discouraging people to rejoin the workforce, it nevertheless has provided a reality check for the markets that the road ahead remains a bumpy one.

However, even if after that terrible jobs report the most optimistic investors have become more closely aligned with the Fed on the pace of the recovery, there is another misalignment that just grew more problematic – inflation expectations. The two most closely watched gauges of market-based inflation expectations in the United States – the five- and 10-year breakeven inflation rates – are climbing again, having steadied somewhat during March and April. The 10-year rate has topped 2.5%, while the 5-year rate has reached 2.8% - the highest since 2011. When inflation expectations rise faster than nominal yields, real yields fall, pressuring the currency. 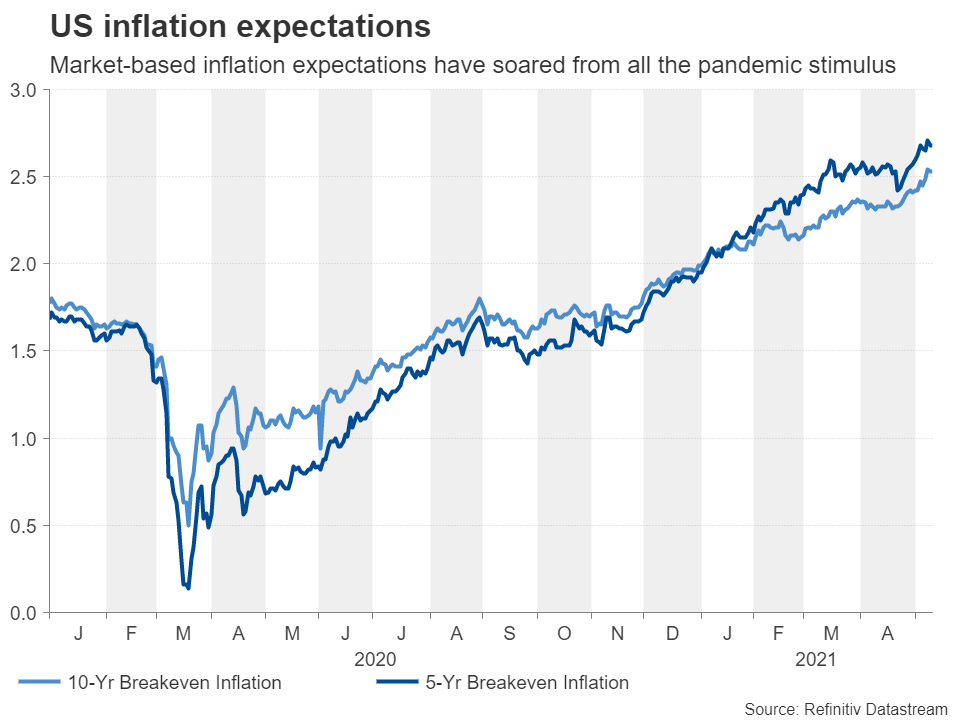 Fed policymakers all seem in agreement that the inflation surge will be transitory and will ease once the low base effect of 2020 drops out of the calculations and the boosts from the fiscal stimulus and pent-up demand fade. The Fed also does not appear to be particularly concerned about the worrying trend in higher input costs for manufacturers caused by soaring commodity prices as well as by supply chain bottlenecks and shortages of certain components such as semiconductors.

However, policymakers may be putting too much weight on the extent to which these supply issues are down to the global pandemic and underestimating the possibility that some of these disruptions might be more permanent. The drive in new technology and clean energy is pushing up the price of rare earth elements and metals; copper has surged by 35% so far this year. Manufacturers are also struggling with a worsening shortage of chips, which are used in most electronic products but increasingly in cars as well.

There are other non-pandemic factors at play too, such as the decline in globalization that was triggered by Brexit and Trump’s protectionist policies. The latter is also being seen as having ignited an economic war between China and the US, which could be making it more difficult for manufacturers to resolve some of the supply chain constraints.

All this is fuelling fears that the current inflationary episode will end up being sticky and with actual inflation now starting to explode higher as well (the consumer price index jumped to a 12½-year high of 4.2% y/y in April), the Fed may need to do more to convince markets that price increases are not here to stay. 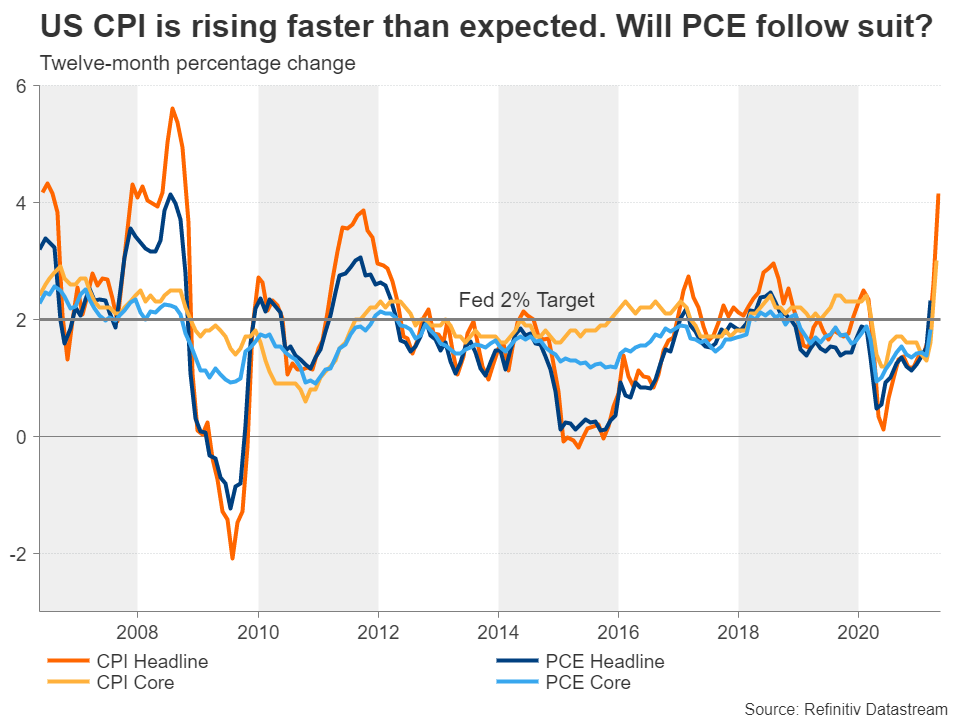 But the Fed still has some strong arguments in its favour, namely, that the labour market is nowhere near a full recovery. Total employment in America remains about 8 million below pre-pandemic levels. When taking into account the number of jobs that would have been created had it not been for the Covid economic crisis, the shortfall is probably closer to 10 million.

Although some of the concerns about the enhanced unemployment benefits deterring Americans from taking up work are justified and this could spur some wage inflation as firms struggle to fill up vacancies, this is one effect that it can be said with more certainty that it will be temporary. This also ties in with the other argument in support of the Fed’s thinking, which is that once all the fiscal stimulus ends, more people will naturally return to the labour market and consumption from pent-up demand will ease back after some time, at which point, monetary stimulus will be the only game in town.

The question is, can the Fed keep the markets calm until the temporary growth and price boosts have subsided and there is less distortion in the data? Probably, but only if inflation doesn’t get too out of control. The 10-year Treasury yield has already been fired up after the CPI report and the dollar is rebounding from its post-NFP lows. Should the jump in CPI be backed up by a similar rise in PCE inflation, which the Fed pays closer attention to, the 10-year yield could soon surpass the February peak, helping the dollar regain its mojo.

The dollar index slipped below its moving averages (MA) and the ascending trend line during the April slide, but more strong data in the coming weeks could easily lift the index back above its 50-day MA around 91.70, eliminating the negative bias in the short term.

However, in the more medium term, whether the dollar can achieve a more meaningful rebound will depend on how soon the Fed flags a change in policy direction as there’s unlikely to be another major selloff in Treasuries before then. As long as Fed officials stick to the same old script that the rise in inflation will be transitory even if the data suggests otherwise, there’s likely to be several bursts of volatility in the markets as inflation worries persist. However, the dollar will probably not be able to resume its uptrend until the first hint of tapering is telegraphed by the Fed.

That was expected to happen in June. Now investors aren’t so sure and September is seen like a more plausible date for the Fed to announce it is time to start scaling back its $120 billion a month in bond purchases. One thing is for sure, it’s going to be a very anxious wait until that first taper signal and markets could be headed for a rocky ride this summer.