The Federal Reserve's commitment to support the economy has been only the latest blow to the dollar as the greenback is on the back foot amid a market rally. Valeria Bednarik and Yohay Elam discuss the latest developments, how it impacts safe-havens, stimulus, Brexit, and what is next for 2021 – nothing lasts forever.

Yohay Elam: Looking at the forex board, there are different grades of winners and one big loser – the US dollar. The latest development has been Wednesday's Fed decision. The bank did not announce any changes, but made new commitments and published new forecasts. How did the Fed contribute to the dollar downfall?

Valeria Bednarik: US policymakers remind us all how gloomy the economic outlook remains and that rates will remain low for a long, long time. Guess that's Fed's contribution to the greenback's weakness.

Yohay Elam: Gloomy situation, help to come later even if not now?

Valeria Bednarik: Anyway, there was an optimistic comment that the market seems to have ignored. Powell bet on vaccination and said that if immunization is reached the mid-next year, the economy will likely wake up. My personal take is that Powell will rather wait until Congress decides on a stimulus package before pulling the trigger again.

Yohay Elam: He balanced by saying there is a very strong need for fiscal stimulus now, and a brighter future. So, a mix of promises to do more and growing pressure on Congress to act

Valeria Bednarik: Yups. And a Congressional decision seems imminent given that the government will run out of funding this week.

Yohay Elam: Indeed, there is a deadline to fund the government that expires on Friday night, and preventing a shutdown is correlated with a fiscal deal. The latest from Washington is that a deal could come within hours, but deadlines...

Valeria Bednarik: Yeah, not that are getting much respect lately. Anyway, with the covid situation, is not the time to delay things. Furloughed employees are the last President Trump needs ahead of his departure.

Yohay Elam: and Senate Republicans ahead of the Georgia runoffs. Weak retail sales and rising jobless claims serve as a warning sign as well

Valeria Bednarik: Indeed. Numbers are worsening on all fronts. and vaccine hopes are not enough.

Yohay Elam: Downbeat data should be risk-off, dollar-positive, but the bad news is good news once again – higher chances of stimulus

Valeria Bednarik: At this point, vaccination is quite symbolic. Guess we will have a clearer picture once Congress makes a real announcement. The stimulus amount is the critical point for me

Valeria Bednarik: The Senate was unable to agree on a $200/300 billion package and now they are talking about $900 B, but well, just talks. Not only because of two shoots, but also because of the number of doses available at the time being... 300K in a 260 million population country, and the fact that production won't meet initial estimates. At least, that's what Pfizer said.

Yohay Elam: Vaccinating health workers and the elderly should have a big impact – high return on investment, but we're not there yet

Valeria Bednarik: We are putting too much hope in having a better 2021. But how much better it could be at the time being? In the best-case scenario, the economic comeback will start in the second half of the year.

Yohay Elam: I think that hope is an economic engine of its own. A business will hold tight, seeing the light at the end of the tunnel

Valeria Bednarik: Agreed. And then, what's for the greenback? Not the first time it enters a selling spiral ahead of year-end, to quickly recover afterward.

Valeria Bednarik: Could we expect a similar picture this time? Once we get stimulus and Brexit end (Tks Lord!). Yeah, Santa Rally that could fade in January.

Yohay Elam: Sure, after the Christmas cheer comes Blue Monday in January. In 2021's case, there will likely be problems with the vaccine, distribution, production, efficacy, and potential profit-taking in markets

Valeria Bednarik: Agreed, yes.  No time yet to buy the greenback.

Yohay Elam: It is basically the dollar vs. the world. Stimulus of any kind is good for gold – more money means some will go into the precious metal

Valeria Bednarik: Yups. Not the first time, neither the last. Yeah, gold gains are here to stay. The metal has corrected part of its huge gains but bulls remain in the driver seat, as easy money will continue to come.

Yohay Elam: Perhaps another victim of this dollar vs. the world phenomenon is the yen's safe-haven status. The yen is gaining ground alongside all the rest

Valeria Bednarik: Yups, it could look weird in the near-term, but has its logic in the wider perspective, mainly when you focus on Treasury yields. Yields plummeted throughout the pandemic to record lows, and despite recovering, they are still below pre-pandemic levels. And we know they will remain depressed. 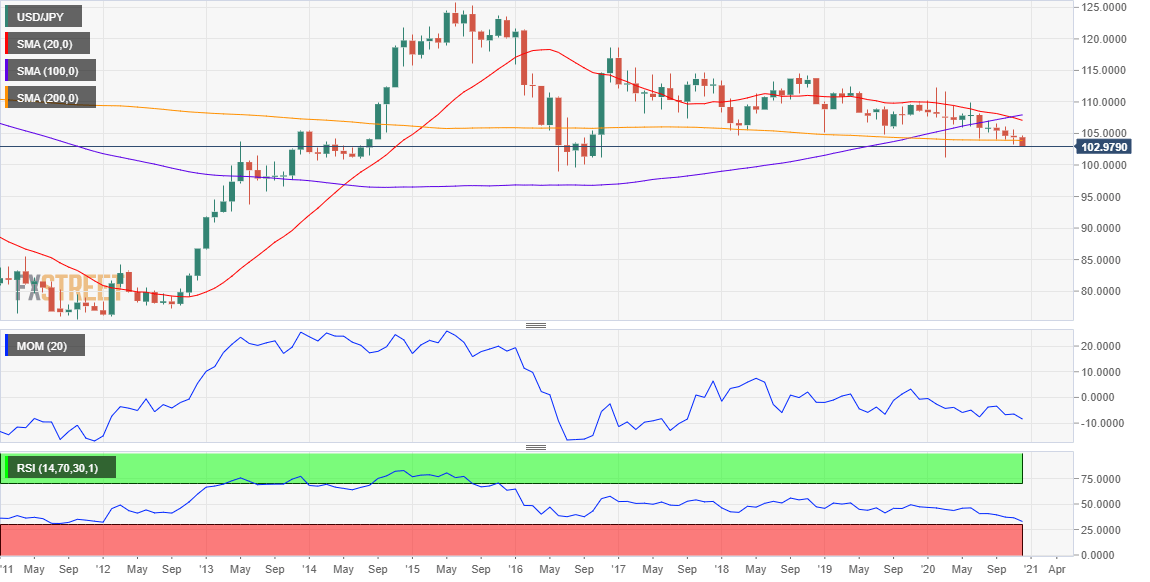 Yohay Elam: So USD/JPY have an anchor despite the yen's loss of its status

Valeria Bednarik: Take a look at the monthly chart. USD/JPY year's decline is quite irrelevant in the wider view. Yeah, yields are a long-term anchor.

Yohay Elam: Always important to zoom out to get some perspective

Valeria Bednarik: Yeah, we get bored quite fast. March/April drama continues, it's just we don't care that much. A typical market behavior

Yohay Elam: Always a new toy to play with

Yohay Elam: I'm sure we'll find something new after Brexit

Valeria Bednarik: I can't imagine a world without Brexit...

Yohay Elam: It's almost over. The question for traders: how much is a deal priced in?

Valeria Bednarik: Anyway! Maybe a bit too late to join dollar's selling but not yet time to buy it?

Yohay Elam: I think there is a bit more room to the upside

Valeria Bednarik: I would say most of it Yohay. yeah agree, a bit more upside, but not that much. no 1.40 for GBPUSD

Yohay Elam: But would say that downside risk is greater. In case there is no deal, the pound would crash, seems unlikely though