Skip to main content
TRENDING: EURUSD| GBPUSD| USDJPY| USDCAD| AUDUSD| Gold price
TRENDING: EURUSD| GBPUSD| USDJPY| USDCAD| AUDUSD| Gold price
;
A bleak economic forecast from the Bank of England exacerbated the sell-off in the bruised pound last week, making Thursday’s preliminary Q1 GDP growth figures important to watch at 07:00 GMT. Despite a quarterly slowdown, the UK economy is expected to have picked up steam at the start of the year, vindicating the BoE’s monetary tightening strategy, though the data may not be enough to push the bears entirely out of the way.

The Bank of England hiked its main interest rate for the third time consecutive time to 1.0% this month in efforts to contain the rapid rise in inflation but acknowledged the hardship that its policy will cause to households alongside higher energy prices. It expects a double-digit rate of inflation of 10.2% at the end of 2022, which wages will not be able to offset, and an economic contraction despite a falling unemployment rate. For the first quarter of the year, it projects a softer quarterly growth of 0.9%, which is in line with analysts’ current estimates, though on a yearly basis the UK economy has probably accelerated. Initial forecasts suggest a stronger annual growth of 9.0% from 6.6% registered at the end of 2021. That would be the highest since Q2 2021. 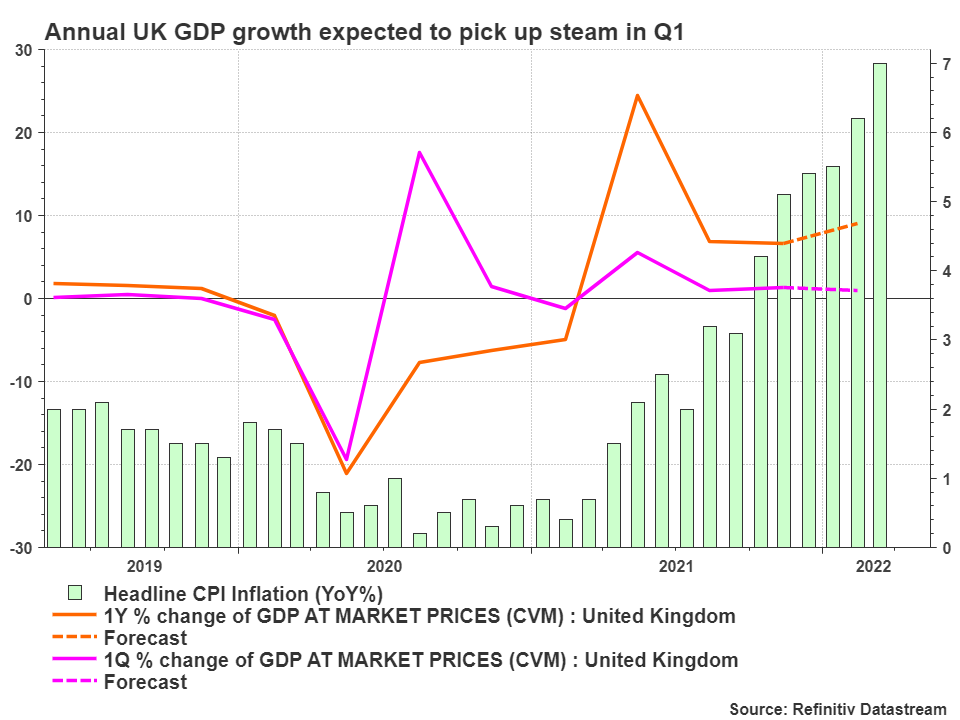 The Russian invasion in Ukraine has extended the pandemic-led supply disruptions, causing more inflation and therefore squeezing households’ pockets further, though the external shocks have probably been less obvious in the Q1 GDP data, allowing for some expansion. Nevertheless, investors may retain some discomfort even if the stats beat forecasts as the dominant service sector notably lost momentum at the start of the second quarter, while consumer confidence sank to the lowest since 2008, making a growth deceleration almost inevitable in the coming quarters. Retail sales were on the back foot for the second consecutive month, revealing diminishing economic activity as well. 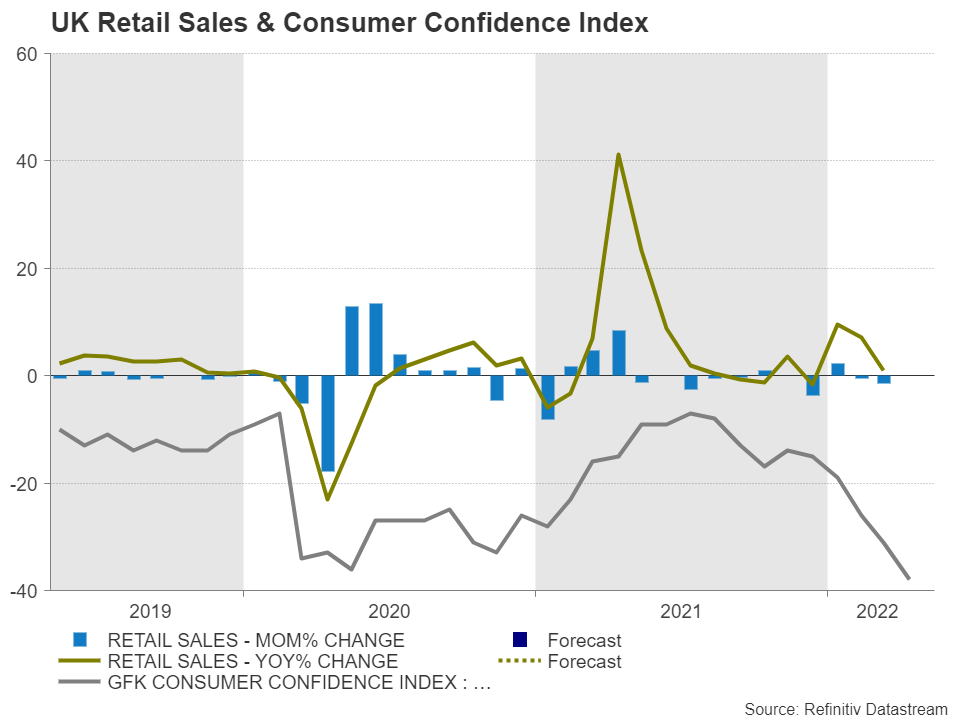 Apparently, the central bank will follow its guidance and deliver a couple of moderate rate increases in the coming months (June and August) to avoid cliff-edge effects from inflation as promised, though that strategy risks having a cosmetic effect if the economy shrinks in Q2, hinting at a late response to price spikes. Therefore, investors could become more sensitive to Q2 GDP and inflation readings in fear that any persisting slowdown may force the committee to push the pause button earlier than expected.

As regards the pound, the BoE’s careful policy approach and the dollar’s strength have been a toxic cocktail for the market, but the British currency managed to build a floor within the $1.2300 - $1.2259 zone. In the case of a positive surprise, pound/dollar may attempt to crawl above the $1.2400 resistance and the 50-period simple moving average (SMA) with scope to speed up to $1.2580, though given the cloudy outlook for the UK economy, any bullish corrections could be temporary.

Otherwise, a worse-than-expected GDP report could deliver the next punch to cable, likely motivating an aggressive decline towards May's 2020 low of 1.2074.