While some analysts thought that the Bank of Canada could cut interest rates at today's meeting, punting the decision to October was always the more likely outcome. As my colleague Joe Perry noted in yesterday's BOC Preview report, "The next full update of the Bank's economy and outlook will not be until the October 30th meeting, so the bank may be likely to carry on with its "appropriate" language and continue to "monitor the data" until then."

As it turns out, that's exactly what Stephen Poloz and company opted to do. The BOC opted to leave interest rates unchanged at 1.75%, reiterating that "the current degree of monetary policy stimulus remains appropriate." In its statement, the central bank noted that the economy was working close to potential, highlighted that housing activity was rising faster than anticipated, cited the escalating trade war as a major risk, and emphasized the importance of global developments (read: the US-China trade war) in driving monetary policy moving forward.

Most traders had expected that central bank to be more explicit in setting up a potential interest rate cut in its October meeting; in other words, the BOC's statement was less dovish than generally expected.

As a result, the loonie saw a quick 40-pip rally against most of its major rivals, including the US dollar. Technically speaking, USD/CAD saw a potential false breakout above its 61.8% Fibonacci retracement near 1.3350 yesterday. The pair formed an bearish pin, or inverted hammer, candle yesterday, signaling an intraday shift from buying to selling pressure and marking a possible near-term top: 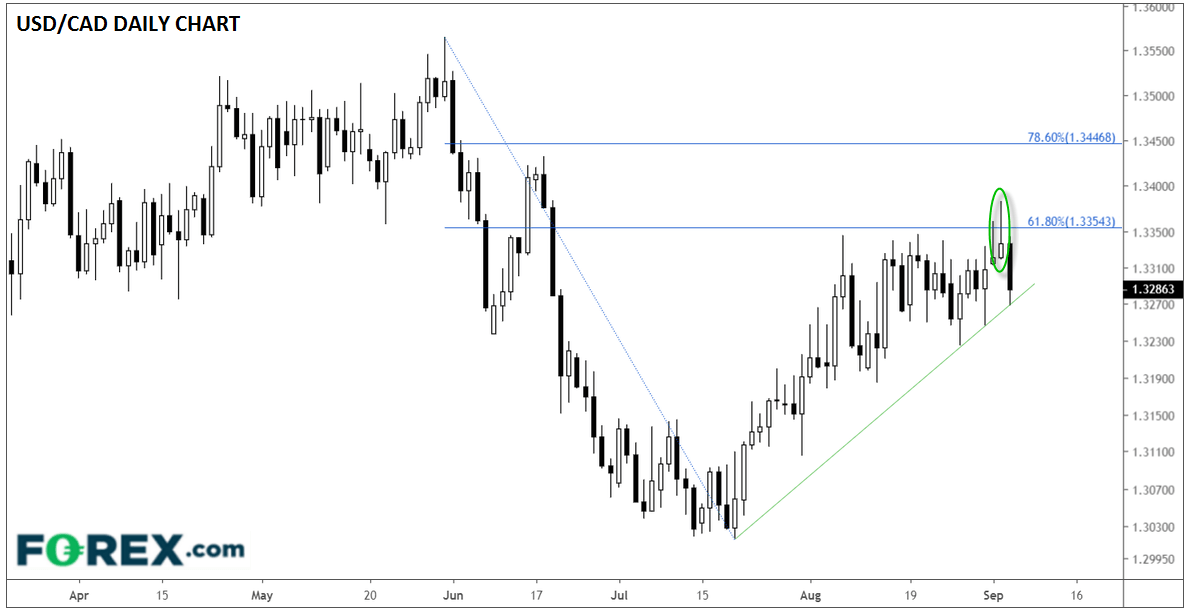 After today's drop, USD/CAD is testing a near-term bullish trend line around 1.3270. As traders continue to connect the dots between the Fed's aggressive easing and the Bank of Canada potentially holding interest rates steady, the pair could break below this potential area of support and see a deeper retracement toward 1.3200 in the coming days.

EUR/USD has hit a new two-month high above 1.11, amid hopes for a fiscal boost in Europe, and as growing Sino-American tensions seem to weigh on the dollar for a change. EZ inflation, US data, Trump's China speech, and end-of-month flows are in play.

The US dollar remains on the back foot, with EUR/USD topping 1.11, despite a worsening market mood related to Sno-American relations. President Donald Trump will announce actions against China following Beijing's tightening of its grip on Hong Kong.