The BOE is set to leave its policies unchanged in its rate decision, probably show some divisions in its meeting minutes and release new forecasts in its Monetary Policy Report – a busy day for traders. Here is why the BOE could err on the side of caution.

The rapid increase in prices has emboldened the hawks on the bank to call for a tapering down of the BOE's £895 billion strong bond-buying scheme. The headline Consumer Price Index has hit 2.5% YoY in June, after standing at only 0.4% in February.

However, most of the increase is due to last year's CPI crash – a base effect that had been foreseen. Moreover, inflation is significantly stronger in the US, standing at 5.4% – and there are signs of peaking there. Business surveys in America showed an easing in shortages.

The UK is probably behind the US in both the rise and stabilization of prices. With CPI still at the BOE's 1-3% range, there is little urgency to tighten policy – especially as price stability is in the BOE's spotlight.

The increase in prices is a result of the reopening – fresh demand meets a dearth of supply in an economy suffering an induced coma. However, while that fresh expansion has been robust, it failed to meet expectations in the past two monthly releases – or in three out of five publications in 2021.

Growth figures for the second quarter are due out only next week, but the parallel release from the US also missed estimates. The UK economy has still not fired on all cylinders, the BOE could provide more support by printing more pounds – and that is adverse for sterling.

3) Covid pingdemic in the present

COVID-19 cases are dropping in the UK, which is a positive sign for future economic growth. However, expansion is currently curtailed by the "pingdemic" – hundreds of thousands of Brits are asked to self-isolate after being exposed to someone who tested positive. That has already caused some shortages in supermarkets.

While the government is trying to alleviate these issues, it seems that also after the second quarter, the economy failed to pick up.

In addition, "Freedom Day" – July 19, when most covid-related restrictions were removed – did not result in a boom of activity. Brits have remained cautious as hospitalizations remain high. Deaths are still rising: 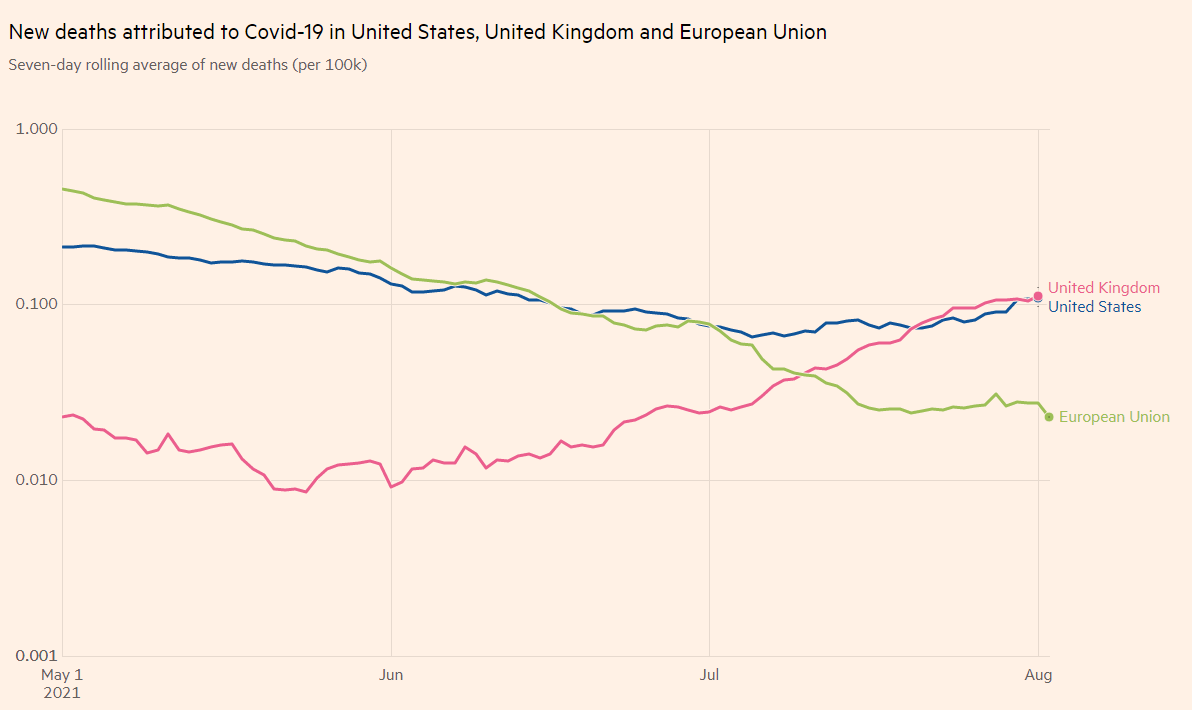 4) Covid uncertainty in the future

Moving from the past and the present to the near future, there is a high degree of uncertainty about the impact of autumn on the spread of the disease, the potential emergence of vaccine-resistant variants, and more.

Scientists in Britain are watching developments in Israel with unease. Despite a world-beating level of vaccinations, the Delta strain has been causing havoc in the small nation – which is now opting for booster shots for the elderly. That may be needed in the UK as well.

The BOE would not like to rush to tighten with so much uncertainty.

US inflation and growth have been mentioned earlier, and America's central bank is undoubtedly a factor – as it leads the world. The Federal Reserve has recently opted for a cautious approach, refraining from circling a date at which it would reduce its bond-buying scheme.

Fed Chair Jerome Powell said that the bank still sees the US economy still has ground to cover and urged patience. The BOE is set to follow from a point of caution, completing its bond-buying scheme and refraining from any tapering. Slowing purchases would signal to markets that rate hikes are coming sooner than later – an outcome it would like to avoid.

A dovish decision that would consist of uncertainty and pledges to support the economy is not fully priced in. Monetary Policy Committee members Dave Ramsden and Michael Saunders called on the bank to end accommodative policies, and that caused upward spikes in the pound.

However, BOE Governor Andrew Bailey and other members lean toward caution and they will likely prevail. In this scenario, sterling could stumble, paring some of its recent gains.

Will GBP/USD tumble down and remain depressed? Probably not. As mentioned, the Fed is also dovish and signs of weaker inflation in the US will likely weigh on the greenback. If stock markets continue cheering support from central banks, the resulting risk-on mood would allow cable to climb back up.

There are good reasons for the BOE to convey a cautious message on its August "Super Thursday." That would weigh on GBP/USD , but probably not for too long.