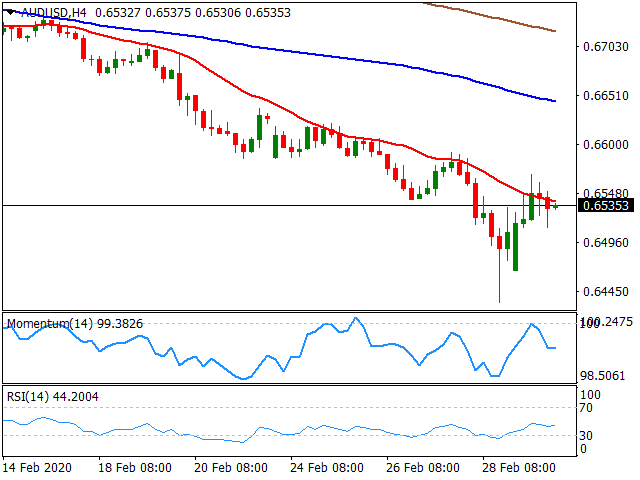 The AUD/USD pair recovered slightly on Monday after hitting an 11-year low last Friday, as risk assets partially rebounded from recent selloff amid expectations that central banks around the globe – and the Federal Reserve in particular – are poised to ease monetary policies to boost the economy. AUD/USD bounced from a low of 0.6433 but failed to sustain the move and remained capped by 0.6568. During Tuesday’s Asian session, the Reserve Bank of Australia is due to decide on monetary policy. Although the RBA is expected to keep its cash rate unchanged at 0.75%, some analysts believe that major central banks could take coordinated rate cuts to combat a potential global recession, and the RBA could be the first bank to do so.

The short-term technical view has improved slightly, although AUD/USD continues to trade below its main SMAs and indicators tuned flat but remain in negative territory. The pair would need to regain the 0.6640 resistance zone, where a descendent trend line converges with the 20-day SMA, to pick up some pace and attempt a steeper recovery. Below this area, AUD/USD would likely remain subject to further selloffs with supports lining up at 0.6433 and the 0.6400 psychological level. However, a surprise cut from the RBA would put the Aussie under heavy pressure, with scope to test January 2009 low at 0.6344.