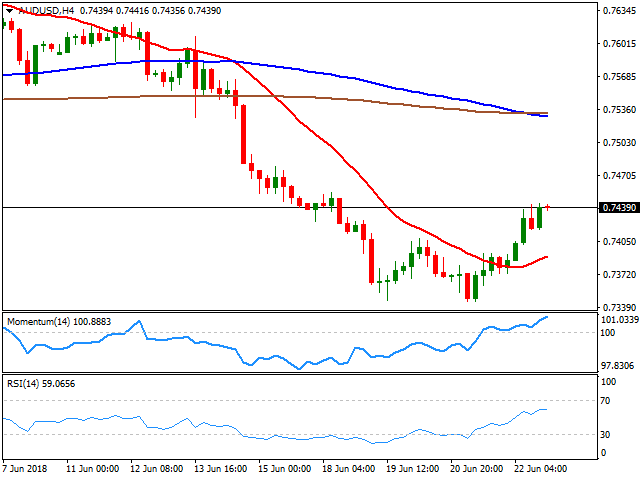 The Australian dollar recovered some ground against its American counterpart after bottoming at 0.7345, a fresh yearly low, ending the week at 0.7439. The pair trimmed Friday the losses triggered by soft local data and trade war fears present during the first half of the week, on a mild recovery in equities and as speculative interest decided to drop the greenback. However, the Australian currency continues to lack strength of its own, and the imbalance between both central banks alongside with concerns of Chinese economic health will likely keep the pair on the bearish side. Nor Australia, neither China will release any relevant data this week, which means sentiment may continue leading the pair. The daily chart shows that the pair is well below all of its moving averages, which maintain their bearish slopes, while technical indicators have bounced modestly from oversold readings, the Momentum already turning flat and the RSI at 41, indicating that the latest recovery could be reverted by bears. Shorter term, and according to the 4 hours chart, however, the pair could extend its current upward corrective movement, as it is advancing above a bullish 20 SMA, while technical indicators hold well above their midlines, partially losing their upward strength amid decreasing volumes at the end of the week, and not as a sign of decreasing buying interest.