Global bond markets have experienced a monstrous multi-year rally, mainly fuelled by unprecedented easing in central bank monetary policy. Most major central banks have engaged in Quantitative Easing and ZIRP/NIRP since the global financial crisis. As a result leverage and risk-taking were greatly encouraged, as the cost of funds became extremely cheap. This led to very high valuations for a wide range of risk assets, with many market participants characterising them as bubbles. 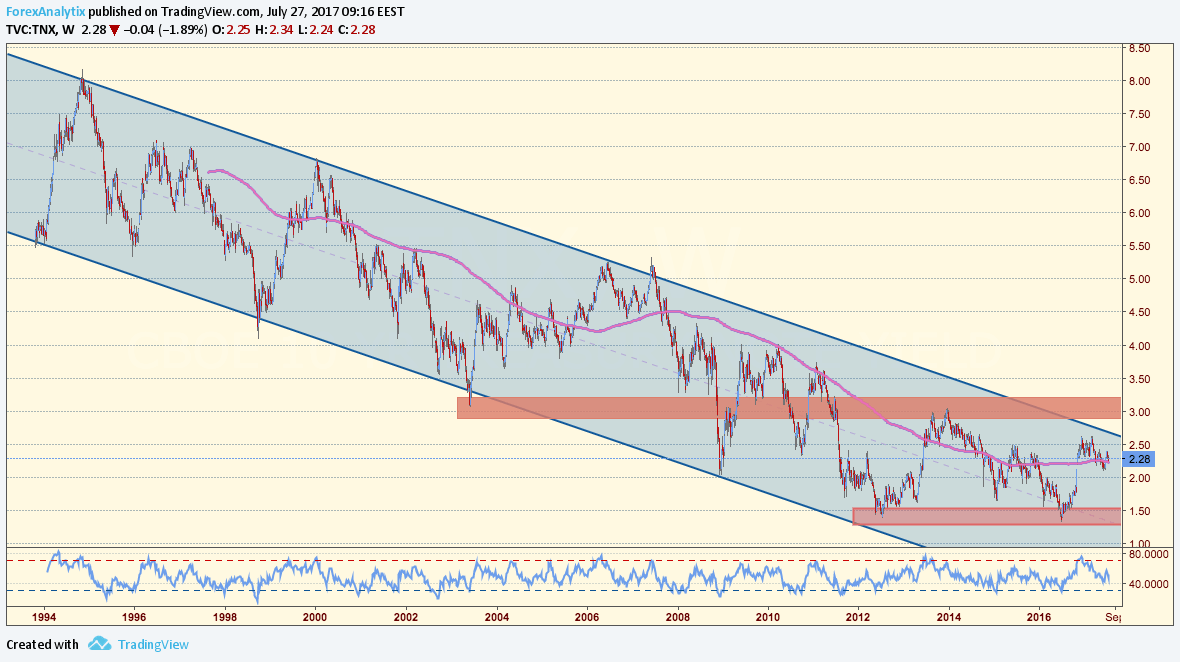 10 year US Treasuries in particular have been in a very well-defined downward channel which spans well over 20 years – 10yr yields have fallen in a near straight line from 8% to around 1.5% lows.

Where does this bond monster run end? How long can ultra loose monetary policy go on for? After nearly a decade of relentless easing, the first signs of its end are slowly emerging. It’s most likely that the world is heading back to higher yields although it’s unlikely we will see neutral yield levels like in the 80s, 90s and 00s. The new normal will probably mean around 2% base rates and 3-5% 10year bonds for majors – such a move should bring relief to markets and asset values.

The Fed, having been criticized for not hiking a couple of years back when economic data started to show promise, didn’t make the same mistake again in 2016. They commenced their hiking cycle in December 2016 and continued with more in 2017. However, they now face a tough dilemma as they are hiking into a weakening economy. Tightening monetary conditions will eventually affect the economy’s recovery path and this is already starting to show.

The good news for the Fed is that they’re not alone in their fight towards higher rates. The ECB have already strongly hinted about reducing their balance sheet and eventual rate hikes. The Bank of Canada already hiked once and could follow up soon. Even the Bank of England, amid all the Brexit-related uncertainty, are talking about reversing some of the ultra loose policy with 3 hiking votes in the last MPC meeting. In a fitting metaphor, central banks are like Tour de France cyclists: the Fed has spent a lot of time at the front of the peloton doing all the hard work while others streamlined behind them. Now it’s their turn to move back and let the others take over.

On a macro level, we think that the global yield landscape has changed. Bonds have been very rich for very long as risk premiums were practically eliminated. The recent bond sell-off was probably the precursor to a bigger move lower around the corner.

The Technical Analysis Perspective on the Bund

The Bund found a top last September but has been trading within a large triangle since February 2016. The last rejection from the triangle’s resistance came just above the 165 level and after a strong push lower the Bund corrected higher in a bear flag consisted of 2 equal legs (an A-B-C according to Elliott Waves Theory and an A-B-C-D according to Harmonics). It finally rolled over after retracing almost 50% of the prior move lower and is now breaking below the bear flag that has a theoretical target of 157.54 which is coincidentally very close to where the triangle’s support is. The closest support zone is at 159.70 and as long as we hold the 162.70 area we remain bearish looking for the move lower to accelerate. 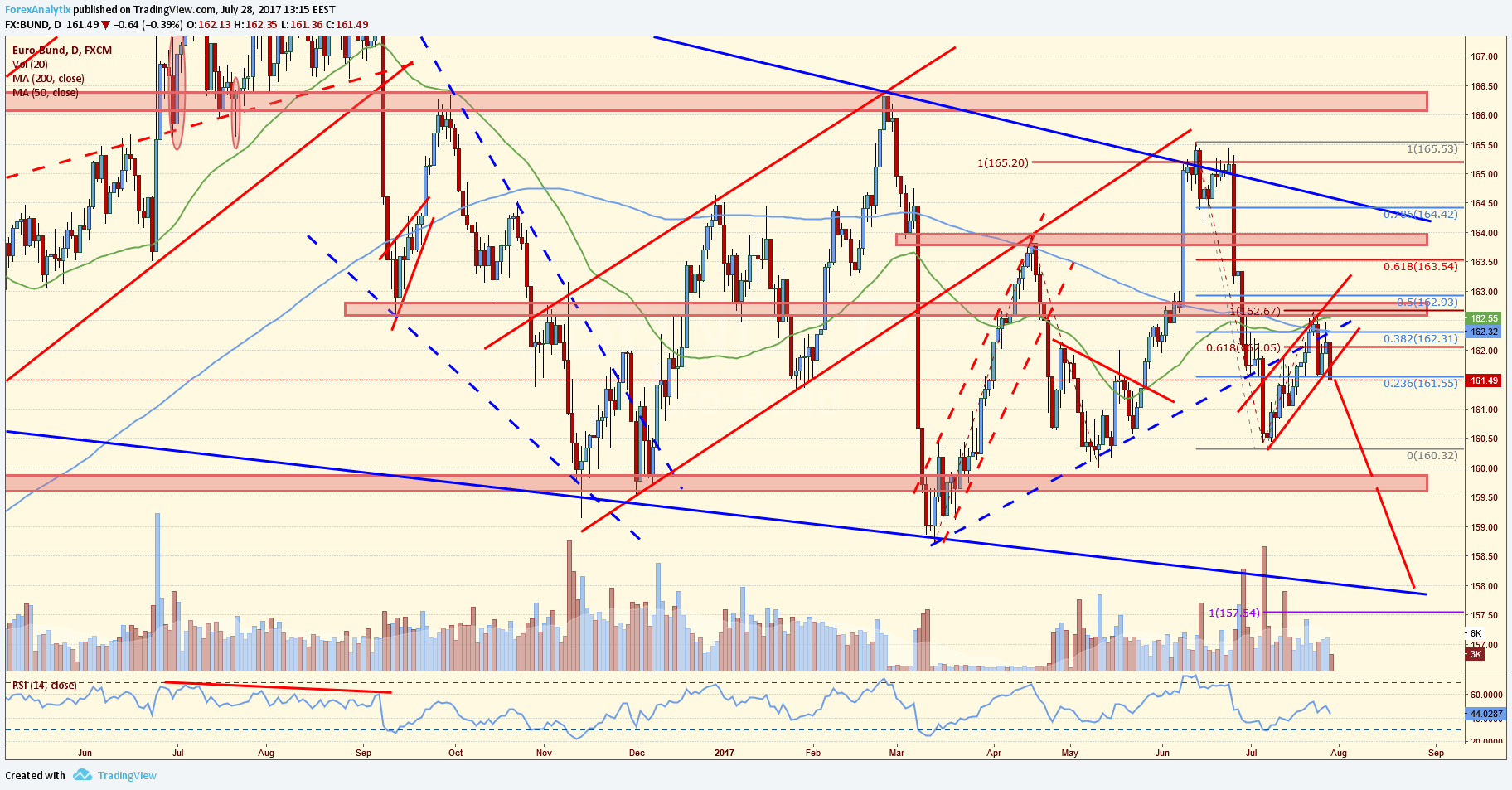 The Elliott Waves Perspective on the 10Y Note

10 year US notes are in a bullish mode since the start of the year but the recovery on the daily chart is clearly measured in three waves. In Elliott Wave theory that represents a corrective price action, labeled with A-B-C letters. It’s seen as a counter-trend move that can be fully retraced once it is completed. Based on the latest sell-off from June 13 2017 high, we think that more weakness is on the cards, at least towards the lower side of a corrective channel, down to 124’00. If the 10 year US note stays in bearish mode then we can expect an important bearish turn for the EURUSD as well, since we notice the positive relationship between the 10 year US note and the EURUSD since the start of July. 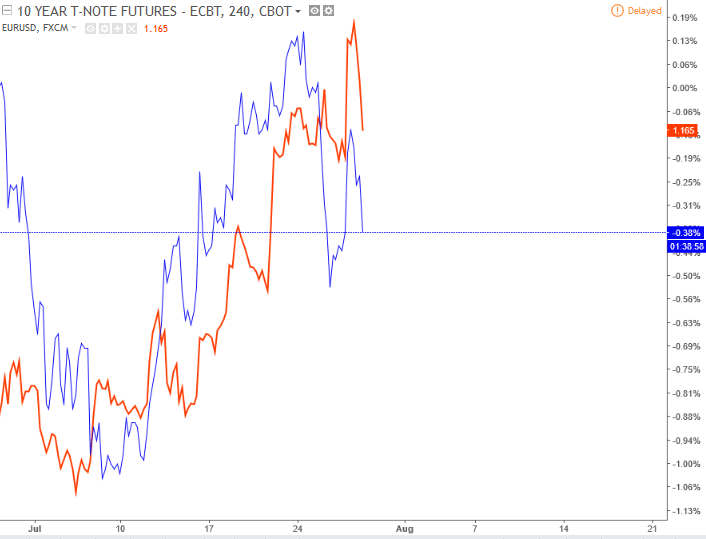 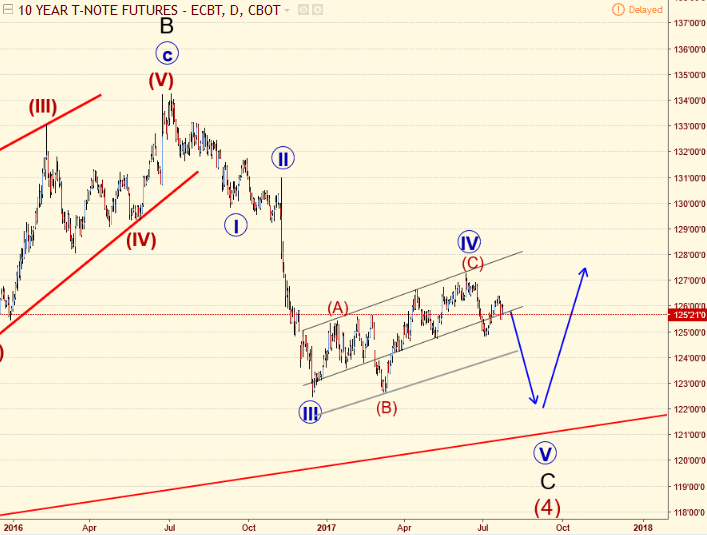