Last Thursday, the New York Fed added more than $80 billion in fresh temporary liquidity to the financial markets. Move over folks, nothing to see here – but what does it mean for gold prices?

Repo Crisis Is Not Over

Last week on Thursday, the New York Fed added $83.1 billion in temporary liquidity to financial markets. And banks’ demand for liquidity flared up again on Tuesday. If you haven’t heard of it, don’t worry – almost no one did. After all, journalism is about covering important stories… with a pillow!

The Fed not only injected some fresh liquidity, but also noted that it “may keep adding temporary money to markets for longer than policy makers had expected in September,” at least through April. So much for the normalization of monetary policy…

Please look at the chart below. It shows the Fed’s balance sheet in 2019. Although the US central bank has managed to shrink its assets a bit compared to the peak of $4.516 trillion from early 2015, the quantitative tightening has ended quickly.

Chart 1: Fed’s balance sheet in 2019 in trillion of US dollars 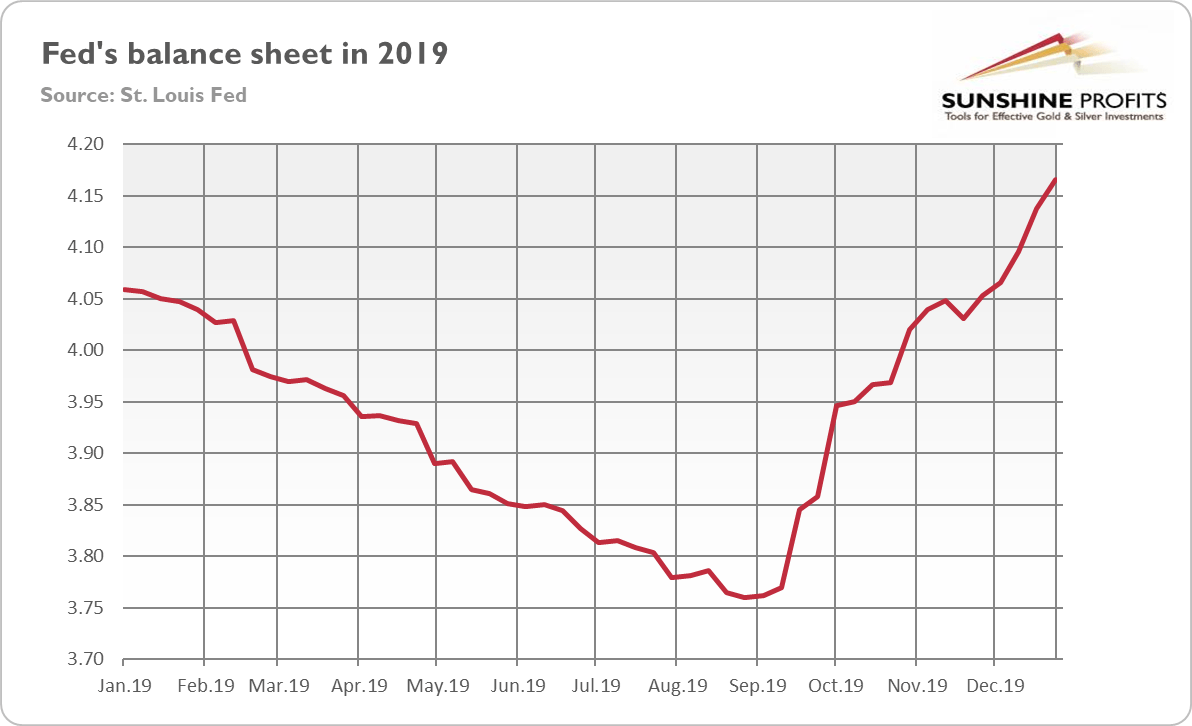 Last September, in a response to the repo crisis, the Fed started again buying assets (but do not call it quantitative easing, this is, wink, wink, something different). Actually, the recent liquidity injections have already reversed all the tightening that occurred earlier in 2019. The Fed added more than $400 billion to its balance sheet, rasising it from the lows of $3.76 trillion up to $4.165 trillion at the end of December. And Thursday’s move will add even more to the Fed’s balance sheet!

What is important is that the liquidity shortage in the U.S. repo market was not a one-off event, but that it has become a structural problem. As the December report from the Bank of International Settlements explains,

U.S. repo markets currently rely heavily on four banks as marginal lenders. As the composition of their liquid assets became more skewed towards US Treasuries, their ability to supply funding at short notice in repo markets was diminished. At the same time, increased demand for funding from leveraged financial institutions (eg hedge funds) via Treasury repos appears to have compounded the strains of the temporary factors.

To simplify, there is too little cash and too many government bonds. Well, traders can thank President Trump who has increased significantly the fiscal deficit. As the Congressional Budget Office estimated last week, the federal deficit rose 12 percent in the first quarter of fiscal year 2020 compared to the same period last year. Larger deficit means more Treasuries coming into the market, putting an upward pressure on interest rates.

The additional cash injections from the Fed are fundamentally positive for the gold market. First, they act similarly to an additional interest rate cut. Second, they suggest that the financial market is less liquid and healthy that it might seem at first sight. They show that the liquidity shortage has not ended – and that it could trigger an important turmoil in 2020. Gold should shine then!

And let’s not forget about the crazy fiscal policy. So, it might be the case that 2020 will be, after all, better for the gold prices than we previously thought. We expected less insane fiscal policy, but with such huge deficits, the macroeconomic outlook for gold looks more optimistic. However, it’s a bit too early to radically change our view – we will return to this issue, as we always do, in the new edition of the Gold Market Overview. Stay tuned!