NYSE:X has had a rare positive week after investors were apparently thrilled by the report of an increase in raw steel production in the United States. Shares of the beleaguered company have risen over 20% over the past five trading sessions, including a further 5% on Friday to close the week. The recent rise has actually provided the stock with its highest points since May when shares hit $10.19 although the price quickly retreated back down to the $7 level within a few weeks.

The United States Steel Corporation has had a long history of volatility, especially during the reign of the Trump Administration in the White House. Historically, the stock may have one of the worst track records in terms of investor friendliness. In June of 2008, the stock hit all-time highs of $196 per share and just six months later the stock was trading at just over $37. In the twelve years since, the stock has lost investors over 1000% which is nearly 1200% worse than the returns from the S&P 500 over that same time period. 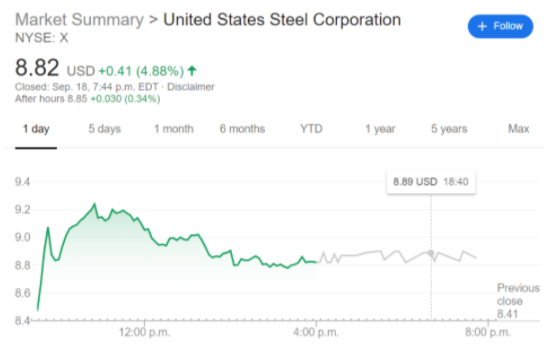 Investors have seen this tale before from X, and despite the optimism surrounding the economy emerging from the worst of the COVID-19 pandemic, it is unclear if the steel industry is where investors really want to be putting their money. The Federal election in November could see the Biden Administration take over the White House which could lead to a change in the tariffs on steel equating to less profitability for domestic steel producers.