The USD/JPY pair retreated over 50 pips from three-week tops and refreshed daily lows, around the 109.20-15 region during the early North American session.

The US dollar failed to capitalize on its early positive move, instead met with some fresh supply amid dovish Fed expectations. This, in turn, was seen as a key factor exerting downward pressure on the USD/JPY pair. That said, the prevalent risk-on mood undermined the safe-haven Japanese yen and might help limit the downside, at least for now.

From a technical perspective, the recent positive move witnessed over the past one week or so faltered near a resistance marked by the 61.8% Fibonacci level of the 110-97-107.48 leg down. The mentioned hurdle, around the 109.70 region should now act as a key pivotal point for traders and help determine the next leg of a directional move for the USD/JPY pair.

Meanwhile, technical indicators on 4-hour/daily charts are still holding in the positive territory and support prospects for the emergence of some dip-buying. Hence, any subsequent fall is likely to remain limited near the 109.00 mark. That said, some follow-through selling might accelerate the slide further towards the 108.80-75 region (38.2% Fibo. level).

On the flip side, any meaningful positive move might continue to confront some resistance near the 61.8% Fibo. level. A sustained strength beyond will set the stage for a further near-term appreciating move and allow bulls to aim back to reclaim the 110.00 psychological mark. The USD/JPY pair might eventually climb to test the next major hurdle near the 110.65-70 region. 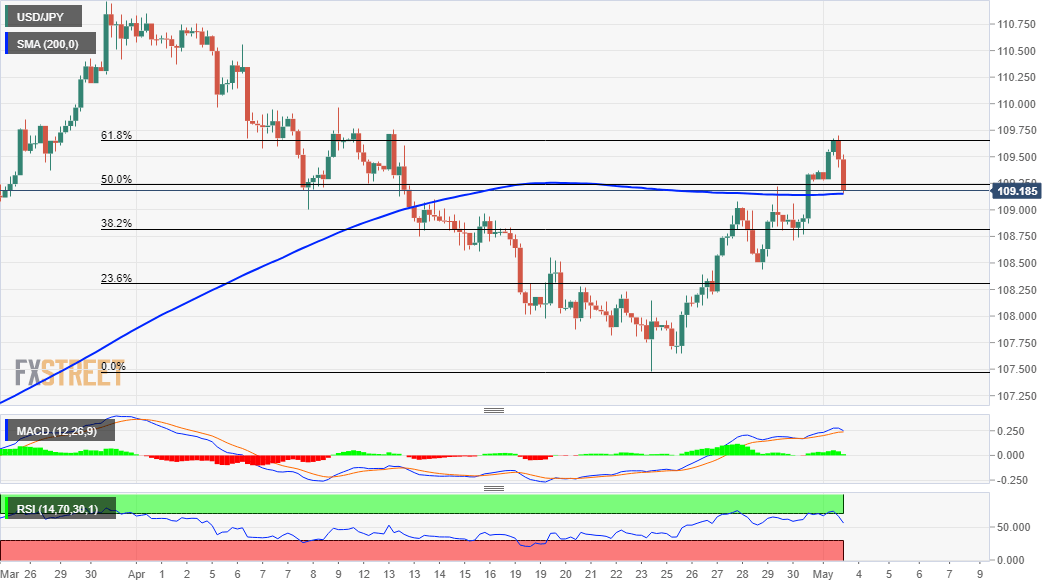