Tesla (TSLA) returned to its winning ways on Tuesday with the stock gaining some 0.59% to trade at $1,064.40 by the close. Stocks were boosted by Fed Chair Powell's testimony and the resultant activities in bond yields. Yields advanced but only modestly after the Fed chair's testimony, and the market is now fully briefed and prepared for a March rate hike. High-growth stocks such as Tesla have shrugged off the initial fears and begun to once again reassert themselves.

Tuesday was a busy one for the stock with Tesla reporting a nickel supply deal sourced from Talon Metals' Tamarack mine in Minnesota. This is one of the first domestic nickel supply deals. Nickel is essential for electric vehicles as it extends the range of the battery. Global nickel demand is expected to soar as EVs go mainstream, so supplies are key.

Tesla recently signed a large deal with Rio Tinto in Australia, and now this further adds to its supplies. Tesla has battery factories in Texas and Nevada, so securing domestic supply will enhance efficiencies and reduce logistical costs. The deal is for 75,000 tonnes of nickel, which could be worth up to $1.5 billion. "Talon is excited to support Tesla's mission to accelerate the transition to renewable energy," Henri van Rooyen, Talon's CEO, said in a statement, while Tesla executive Drew Baglino added, "Responsible sourcing of battery materials has long been a focus for Tesla."

Also on Tuesday, the China Passenger Car Association (CPCA) released data that showed Tesla delivering 70,847 vehicles from its Shanghai plant, a record since it opened. Tesla delivered 936,000 vehicles in 2021 with 473,000 coming from China. Forecasts for 2022 deliveries are for 1.4 million vehicle deliveries. Electrek notes the current rate from Shanghai is ahead of predictions and forecasts Shanghai would have a capacity of 800,000 if December's rate is maintained.

TSLA stock was forming a steady down channel as shown in the chart below but broke out of this in late December. The reasoning was Elon Musk coming to the end of his 10% sale of his stake. The high stopped short of making a new high, so it stands out as a lower high. Confirmation is needed from a lower low before one can say we have entered a new downtrend. So far that new low would need to break $886 from December 21. Right now there is a lot of indecision on the chart. Failure to break the 9-day moving average at $1,070 should lead to a test of $886. The Relative Strength Index (RSI) is neutral around 50, and the Moving Average Convergence Divergence (MACD) is also flatlining. 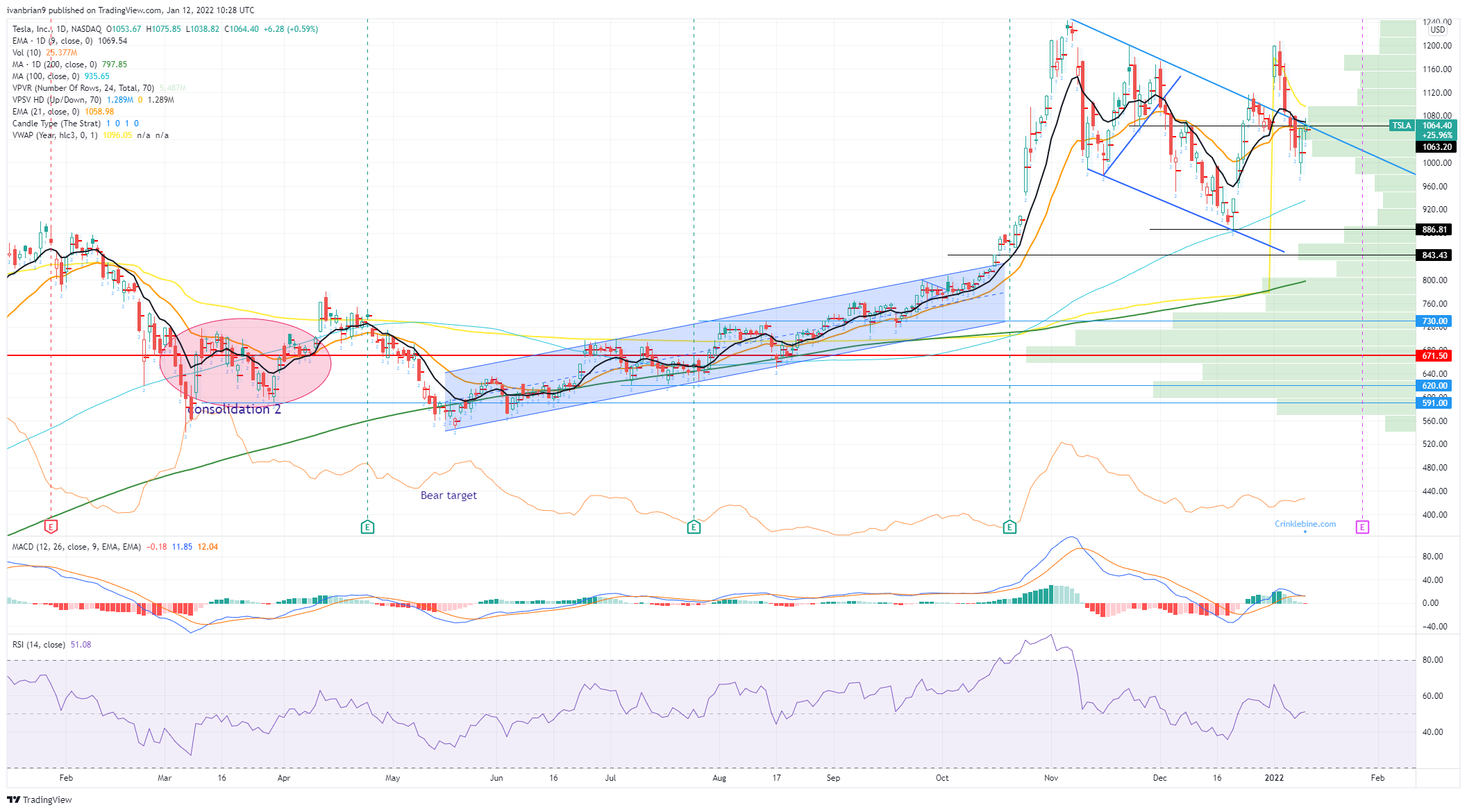