Update July 30: Tesla stock saw a massive move higher on Thursday, rebounding firmly towards $700. Tesla shares rallied 4.69% to close the day at $677.35, slightly off the two-week highs reached at $683.47. The bump in the shares could be mainly attributed to a tweet by CEO Elon Musk. Musk tweeted out, saying that the electric vehicle pioneer is hosting an artificial intelligence day on August 19, which will put its self-driving technologies on display. Meanwhile, an exclusion of EV purchase incentives in the US infrastructure bill, upbeat earnings and overall better market mood added to the upswing in Tesla shares.

Come on something happen here, please! Many expected results to provide some catalyst to the share price, but instead we are met with ... zzzz. The stock needs a breakout or something juicy to get traders teeth into. This is the unspoken, extra skill of trading though, so it is a good lesson to ponder. When is it best not to trade and just sit and wait. Traders are stalking prey here, so wait until the right opportunity presents. Otherwise, your trading account will suffer death by a thousand cuts, and commissions keep piling up.

Tesla stock closed nearly 2% lower on Tuesday despite posting strong earnings after the close on Monday. Earnings were strong with a beat on the top and bottom lines. Adjusted earnings per share (EPS) came in at $1.45 versus the estimate from Wall Street analysts for $0.96. Sales came in at $11.96 billion, also beating the $11.21 billion estimate.  Delivery numbers were also high on investors' minds, and these too were ahead of estimates. Tesla delivered 201,304 vehicles in Q2 2021, an increase of 121% over the same period last year. Tesla said its average selling price had declined by 2% over the year, but its gross margin increased three percentage points from 25.4% to 28.4%. Tesla stock popped just after the release of results, but the regular session on Tuesday was not so kind with Tesla stock closing at $644.78 for a loss of 2%. Wednesday saw little change with Tesla closing just slightly ahead at $646.98.

Tesla has often relied on environmental credits to help its profit numbers, but this was not the case for this earnings release, a sign of increasing strength. Investors appear frustrated by the lack of clarity from Tesla in relation to plans for its Cybertruck and future battery plans. Tesla also said on its conference call that volume growth was dependant on parts availability as the global chip shortage still hurts. CEO Elon Musk said he has many calls late at night with suppliers about resolving shortages.

Tesla grabbed a few price target increases after its results and has seen the average price target move from $671 to $706.

Tesla is stuck in a recent range of $620 to $700. Just before the results, the failure to break $700 and the bigger level at $715 saw the stock retrace. Then the opposite happened and Tesla put in a weak double bottom at the $620 level. Results have done little to change things and move the stock along. $591 remains the key support as a break will likely see an acceleration due to the lack of volume. Breaking $591 will in all likelihood see a quick move to $539. The same can be said for the $715 resistance. A break should see a quick move to $781. Really breaking the psychological $700 level will probably be enough to push things on. This can be well played with some options strategies as the resultant increase in volatility as well as the price move would increase the option value. Something like a $750 call or $550 put might work. A $750 call for August 27 costs less than $5 per share, while a $550 put for the same date costs about $7. Options also offer built-in risk management. 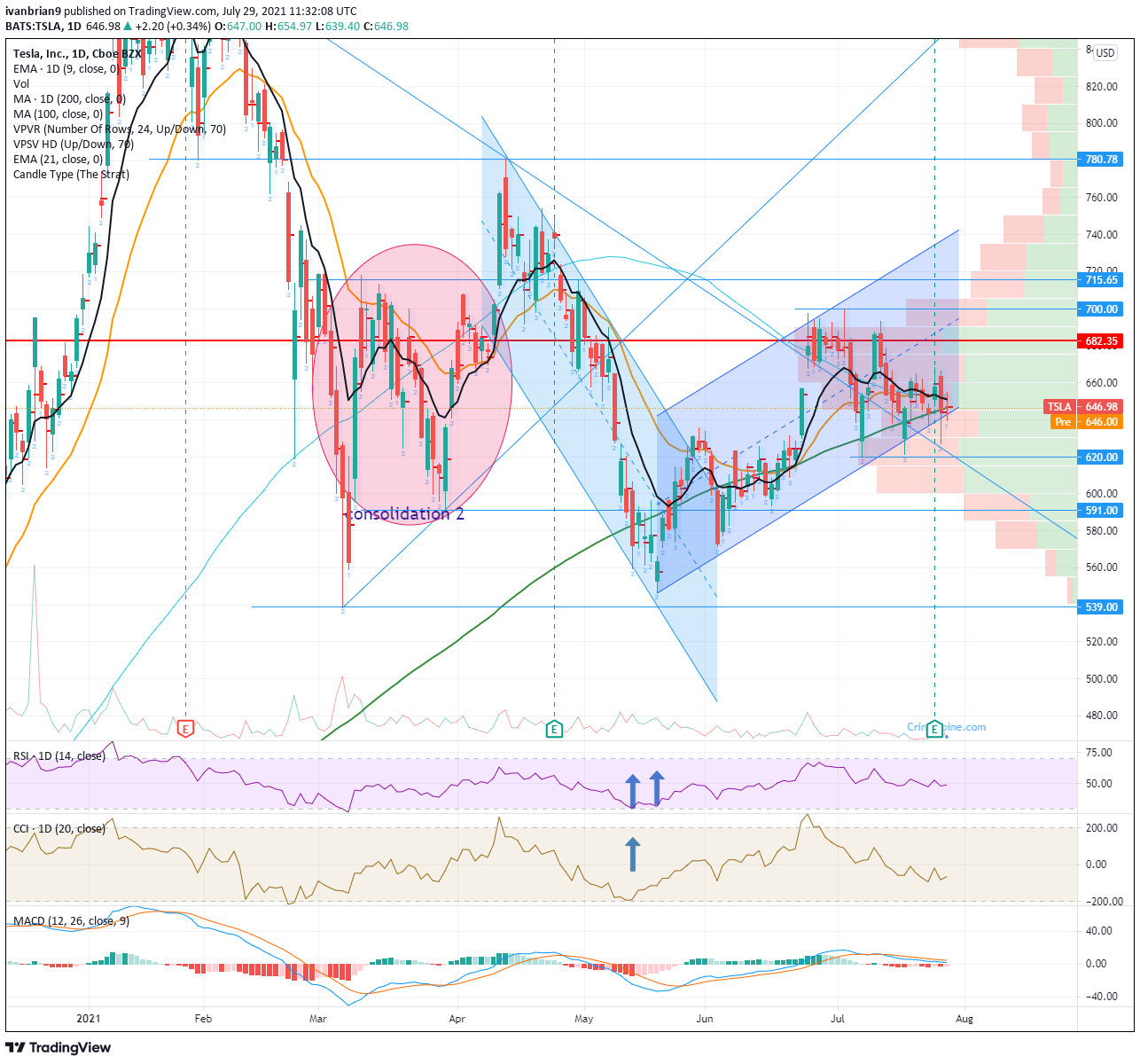