Update: Tesla beat on the top and bottom lines but the shares are tanking as concerns arise about supply issues. Tesla says it aims to increase production as quickly as it can and that it sees supply chain limits continuing through 2022. Tesla (TSLA) stock is trading down 3.7% at $899 but was down over 6% just after the announcement.

Tesla (TSLA) gets its time in the limelight later after the close on Wednesday, but the EV star will have to share that limelight with the Fed. The Fed Q&A will be the most important part of its two-day conference. We are assuming nothing happens on the interest rate front, but it should prepare the way for a March hike. This is priced into markets, so assuming nothing too surprising we may actually be able to produce a relief rally.

Tesla (TSLA) could add to this if it can produce solid results. So far earnings season has not been as hoped. Bank earnings were mixed with investment banks being perhaps the most disappointing aspect. Unfortunately, this happened just as financial sector ETFs were topping the charts for inflows. This week we have had Microsoft (MSFT) so far, which produced strong earnings and a strong outlook. On Thursday, Apple (AAPL) reports. This trio could turn the entire market sentiment around.

Tesla is expected to post earnings per share (EPS) of $2.26 on revenue of $16.35 billion. Tesla has already released delivery numbers earlier this month. Deliveries hit 308,000 vehicles. Given that deliveries are the main driver, that should limit any surprises. The big focus for investors and analysts will likely be on maintaining margins in a rising cost environment. How well is Tesla able to pass on those rising prices to customers? Already we have seen Tesla raise prices for some models, and the company recently announced price increases in China.

Tesla is our highest risk of the three mentioned big tech names: Microsoft, Tesla and Apple. We are all well familiar with Tesla's lofty valuation metrics, and high growth names suffering disproportionally has been a feature of 2022. Delivery numbers are already out of the picture, which means the focus will solely be on margins and outlook.

$843 is a big support, the gap from back in October of last year. Tesla is currently in a pretty strong downtrend with the old pivot of $980 still in place. We also identified $886 as key. Yes, the stock did break lower on Monday but only briefly, and this was sharply rejected. Any stabilisation could see a bullish double bottom, and also note the divergence in the Relative Strength Index (RSI). Earnings will be key. If we can hold down here and earnings are fine, then TSLA should push higher. Failure though will see $843 break and the 200-day moving average below is the obvious target at $812. Currently too indecisive ahead of earnings, we will update our view afterward. 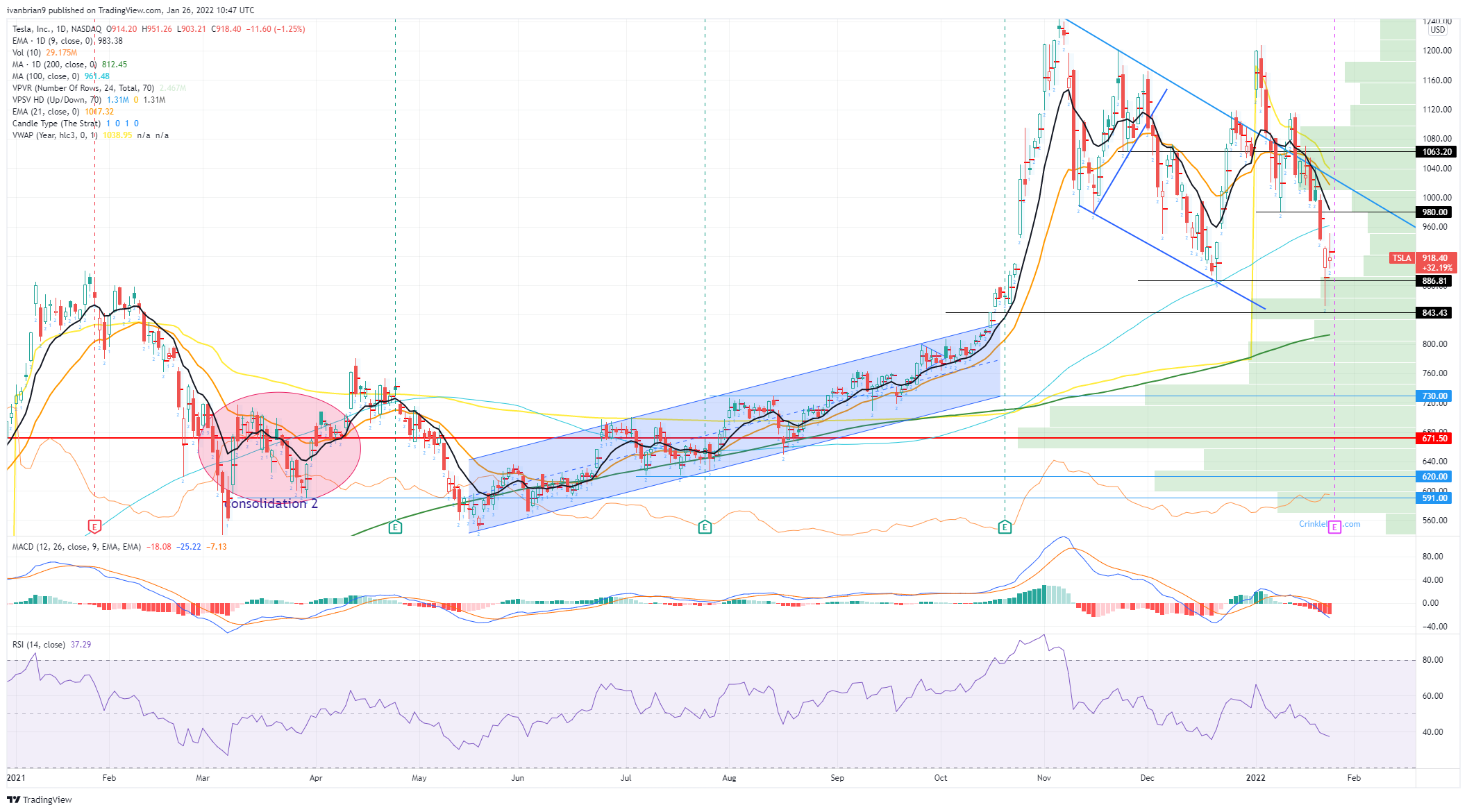