Update: The technical outlook for Tesla (TSLA) is bearish as per the weekly chart's W-formation. The price is reverting towards the neckline of the pattern that is located at 889.88 and near a 61.8% golden ratio. The W and M formations are high probability reversion patterns, and the bears are on board. However, given that this is an overextended W-formation, the 50% mean reversion point may act as a support area that has a confluence with the February highs near 948.

Additionally, the bullish close on Wednesday signals that the downside is nearing a bottom. The daily correction met a 50% mean reversion of the daily bearish impulse which could start to attract bears on Thursday at a discount. in anticipation of the price meeting the 61.8% ratio on the weekly timeframe.

Update: Tesla (TSLA) stock has opened lower on Wednesday as CNBC reports that Tesla boss Elon Musk is being sued by a group of Twitter investors over his failure to timely disclose his stake in the social media company. “What seems crystal clear is that Elon Musk missed the applicable 10-day filing deadline under Sections 13(d) and 13(g) of the Securities Act of 1933 to report 5% ownership in a public company,” Alon Kapen, a corporate transaction lawyer with Farrell Fritz, said in a statement shared with CNBC. TSLA stock is currently trading 1% lower at $975 on Wednesday.

Tesla flattered to deceive on Tuesday in line with much of the stock market it must be said. Tesla closed just over 1% higher at $986.95 when it looked possible for stronger gains earlier in the session. Equities had been buoyed by the not too surprising CPI number which was in line, with the core number actually coming in lower than expected. This saw equity markets open strongly on Tuesday and Tesla (TSLA) stock pushed quickly and confidently above the $1,000 level. However, it was not to be for equities and Tesla with an afternoon sell-off. Tesla had peaked as high as $1021 earlier. Investors are still nervous over rising yields and the potential for the Chinese economy to slow down. Tesla has further headwinds from China in the fact that its giga factory in Shanghai has been the subject of production suspensions due to covid lockdowns. This will not affect Tesla's Q1 results due on April 20 but will be reflected in the Q2 results. Q1 should be strong given Tesla only two weeks ago announced record deliveries.

Tesla it appears has once again started taking bookings for its Roadster in both the US and China. According to Benzinga, Roadster booking reopened in the US on Tuesday and in China on Wednesday. The Roadster can be booked with a hefty c.$50k plus deposit and it has a claimed range of 621 miles. Final prices are not available for the Roadster. Tesla only last week said the Cybertruck will make its debut in 2023 and customers can also book this with a much smaller $100 deposit.

The downtrend remains in place so long as Tesla trades below $1152, which is the most significant high. Tesla has put in 3 lower highs now in this current downtrend. $945 remains the next support and a break here will open up a move to test the key $700 low from Feb 24. That will be a big test as making a new low will add further confirmation and strength to the downtrend. But there is a lot of support at that level, the volume profile is huge and the point of control is also at that level. So it will be tough to break. It could be a useful staging point for trying to get long Tesla once again. Right now indicators are neutral and with earnings set for next week that is likely to be the catalyst for the next leg in the trend formation. 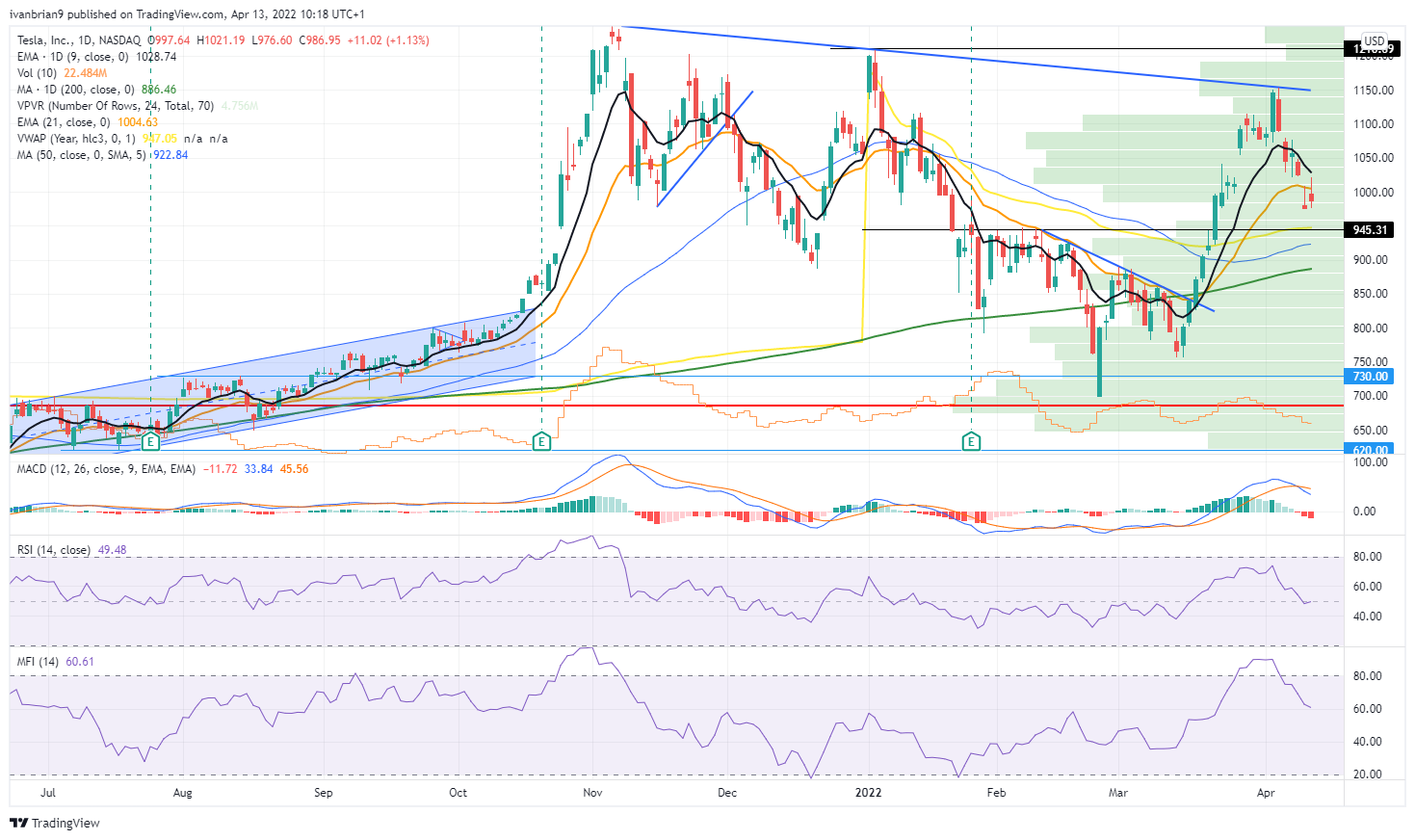 The author is short Tesla stock