Tesla (TSLA) stock gave up 4.7% in Monday's premarket after Bloomberg reported that its Shanghai factory would trim record production by 20% due to sluggish Chinese demand. Shares of the leading electric vehicle maker dropped to $185.75 on the news. At the same time most of the US futures market is down in the premarket. Futures for all three major indices, the Dow, S&P 500 and the NASDAQ, are off close to 0.5%.

The news out of Shanghai caught investors off guard, because until now Tesla had been undergoing a global ramp up in production. These included plants in Berlin and Austin, Texas as well. The Shanghai production cut is said to be caused by a reduction in that market's demand. Due to frequent covid-related shutdowns across China this year, the economy there appears to have pulled back quite a bit.

Demand has shrunk even while Tesla has been ramping up production there to an all-time high. In November Tesla reported deliveries just under 100,300 vehicles. Cutting back to 80,000 units a month is still quite a substantial figure, and Bloomberg sources said it would be easy to ramp back up once demand returns. Reports say the cut will primarily focus on Model Ys. Earlier news accounts said that Tesla had finally exceeded Chinese demand in November for both Model Ys and Model 3s. Waiting times between customer order and final delivery for both models are said to be way down compared with earlier in the year. 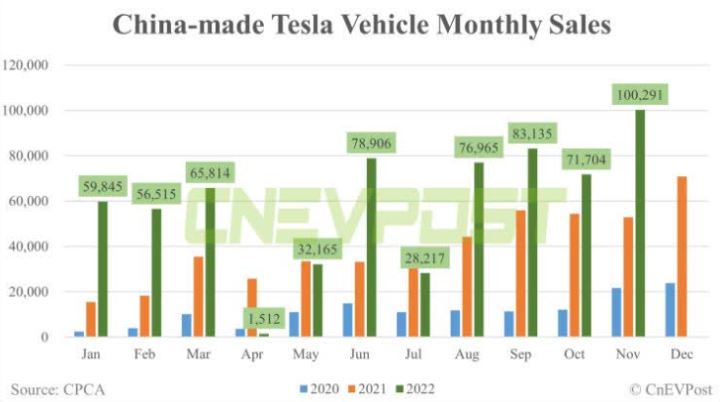 Tesla can of course export vehicles produced at the Shanghai plant, and it does do this. In fact, that is normally the course of action. Tesla Shanghai spends the start of each quarter producing vehicles for export and then spend the latter half producing for the domestic market. In October, for instance, 54,504 vehicles were exported, and just 17,200 vehicles were delivered there in China. Tesla should produce more than 1 million vehicles at the Shanghai factory in 2023.

In other news the European Union's Trade & Technology Council has vocally implied that it may challenge parts of the US Inflation Reduction Act (IRA) at the World Trade Organization. Members of the EU regard certain features of the IRA as protectionist since only US-based companies can receive the many tax breaks for going green that the legislation allows. A primary target of EU member countries are the EV tax credits. In order for a consumer to be eligible for a $7,500 tax credit on a new EV, the vehicle must be assembled in North America.

"There is a risk that the Inflation Reduction Act could lead to unfair competition, could close markets and fragment critical supply chains," said President of the European Commission Ursula von der Leyen. "We must take action to rebalance the playing field... to improve our state aid frameworks. In other words: We need to do our homework in Europe and at the same time work with the US to mitigate competitive disadvantages."

With the latest setback, TSLA stock is once again experiencing resistance at the $200 level. Last Thursday Tesla stock nearly cleared $199 before selling off and closing lower. In order to make a run at late October and early November's swing high at $234, bulls first need to reconquer the $200 level, which is suddenly seeming to be a difficult task.

Nearby support at $180 and $167.50 should both offer some confidence in the mean time. The 9-day moving average also found a base of support recently at the $180 level before moving higher. The Moving Average Convergence Divergence (MACD) still shows that a rally is on, so it is quite possible that an unknown catalyst (Tesla Semi?) arrives in the headlines later this week and works to rally the troops for another try at $200.