Equities swung wildly on Wednesday as the Federal Reserve delivered yet another 75 bps hike and promised more to come. It was just how much more that surprised investors with the dot plot showing the Fed does not expect any rate cuts in 2023. As recently as June, interest rate futures were predicting a rate cut in the first half of 2023. This then moved to H2, and now the so-called Fed pivot is not expected until 2024 at least.

This has come as a bit of a shock to many who have only traded through an accommodative Fed. Investors have grown accustomed to "the Fed has your back" mantra and "buy the dip". It would appear those days are now definitely long gone. As recently as last week, legendary investor Stanley Druckenmiller said he sees the possibility of a 10-year bear or sideways market. The majority of market participants have absolutely zero comprehension of this. They are used to nearly 15 years of Fed policy being extremely accommodative, near zero interest rates, and massive quantitative easing. This process to decouple expectations could take some time.

That was also partly the reason for the intraday spike we saw when the Q&A section began after the Fed decision. Chairman Powell used words like "pause" and "data dependent", and market participants took this to mean a Fed pivot. This as mentioned is ingrained in investors' minds. Eventually, the message appears to have gotten through. Yields are going up for the best part of two years. Yields will likely hit 5%. Equities now have competition. TINA (there is no alternative) is long gone. Do you wish to take your chances in the highly volatile stock market we have currently or take shelter in short-term US treasuries yielding over 4%? Or you could mix in some investment-grade bonds yielding over 5%. That will see continued flows out of equities.

Attention will now turn to the earnings season in approximately one month. Forecasts overall look too high, but analysts have been busy reducing overall estimates based on the last quarter. That is a trend that will continue. We may get some highlights. Perhaps Apple gets a boost from the iPhone 14 into Christmas, but overall highlights are likely to be in short supply. The housing market has turned, retail has turned, and energy prices are falling. This makes it a tough earnings quarter ahead. With earnings coming down, we usually see P/E ratios also fall under a double headwind.

Wednesday saw the perfect test of resistance for SPY at $389. That was the intraday spike when the Q&A started and after Powell used phrases like "pause" and "data dependent". Equities went straight up and failed before collapsing – a negative sign and a swift rejection. Longer-term players and size orders were in charge. That means new lows are now highly likely. The island reversal pattern is still dominant here and is a bearish one. The pivot is at $389, and SPY is bearish below here. 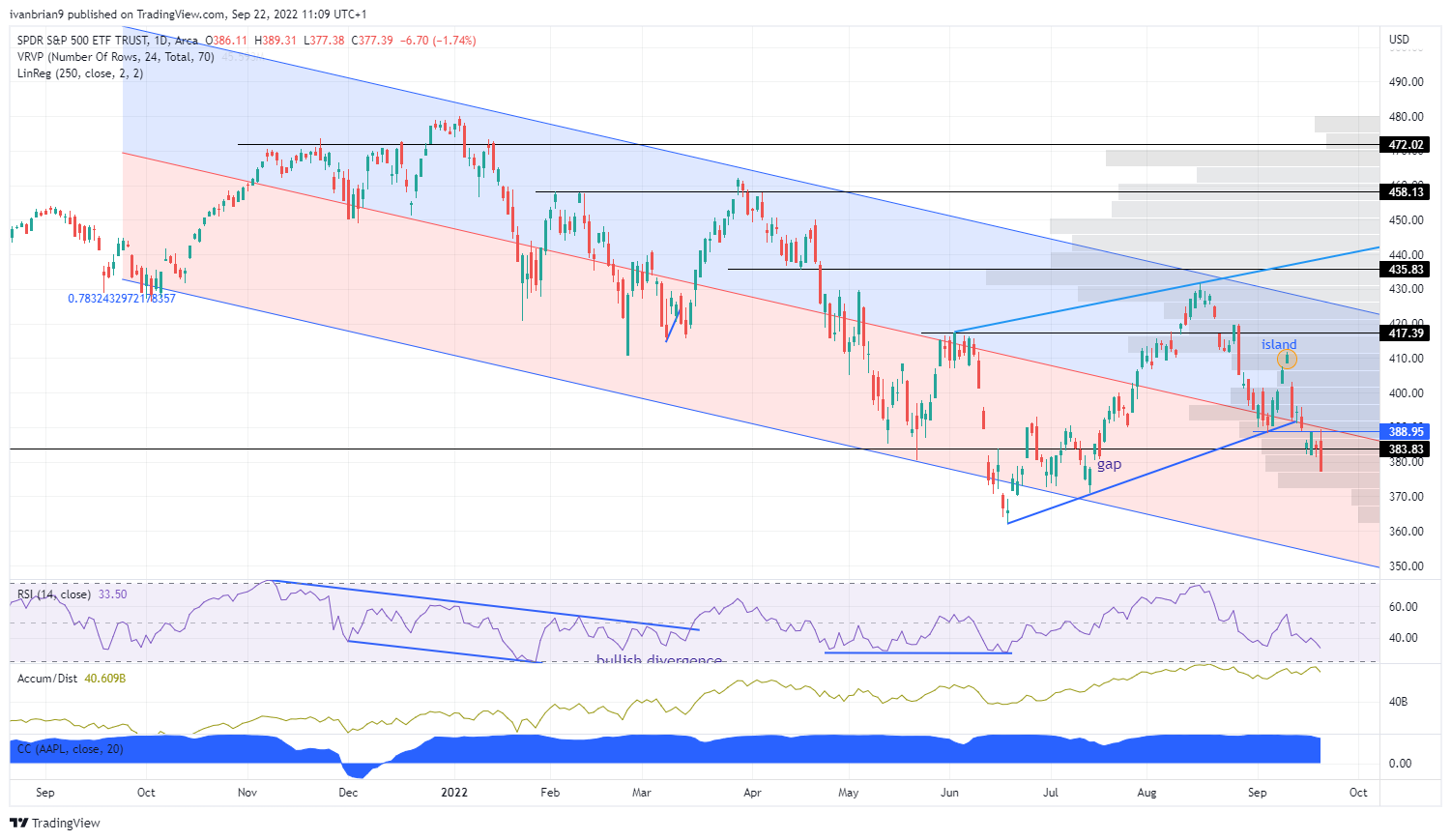