Netflix, Inc. (NFLX) – is the world’s largest streaming platform and video content giant. Q4 2020 earnings will be released today (Tuesday, January 19) after the market close, with Zacks expecting a likely return per share of $1.38, down from $1.74 in Q3 for earnings forecast figures. Revenue is expected at $6.6 billion, higher than the $6.43 billion achieved in the third quarter and $1.1 billion higher than the $5.5 billion a year announced earlier in Q4 2019. 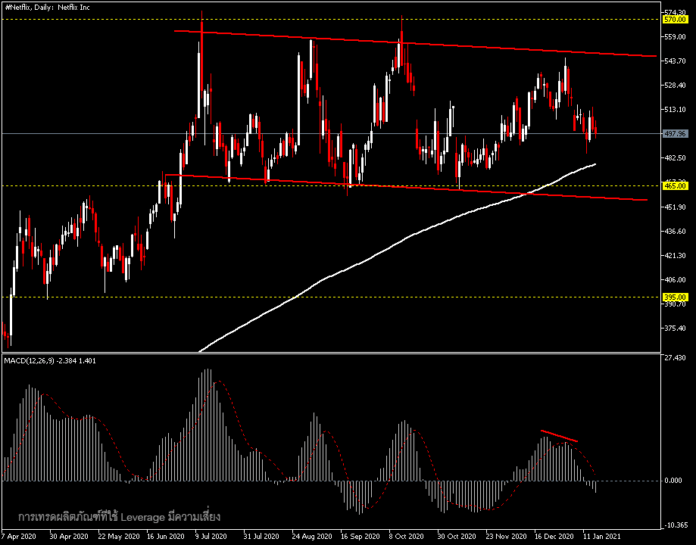 After an increase of 26 million active users in the first six months of the year, the figure fell sharply in the third quarter, adding just 2.2 million. In Q4, Netflix expects an additional 6 million subscribers, meaning its subscriber numbers are on track to hit 200 million people.

In 2021, Netflix plans to produce more than 70 of its own movies, a production output that leaves it almost 50 films ahead of its main rival, Disney+, not to mention traditional filmmakers who still rely on theatres, with many projects and movies postponed or stalled due to the Covid-19 crisis. The outlook from the company will be key.

Technically the share price bounced before the announcement of second-quarter results in July. Netflix’s share price hit a record high of $575 in the summer and has held above $465 ever since, returning to test $575 in early October. As a result, the price is now likely to form a continuation pattern in the bullish flag just above MA200. Therefore, if the fourth quarter results are good, the price may be ready to bounce from the MA200 to test the original high soon. It is also possible that the price could break the MA200 down to test the $465 support zone which would represent a decline of over 6.5% from Friday’s closing price at ($497.98). In early pre-market trades Netflix is up 1.11% at $503.50.