''It's a snoozefest in gold markets,'' analysts at TD Securities note.

The price of the metal has been mostly rangebound for the month of June which has made for shorter-term two-way business between the final weeks of the month between $1,848 and $1,820 in the main. However, rather than rebounding from down here, the price is starting to eat into liquidity below with bulls checked by gains in the US dollar and inflationary pressures that are running at a 40-year high. Higher US yields, as a consequence, are detrimental for the yellow metal since gold does not offer investors yield.

''The yellow metal is being pulled in two directions as a hawkish Fed regime clashes with recession fears,'' analysts at TD Securities explained.

''After all, a Fed hiking cycle tends to be associated with rising recession risks, with the US5-30s curve already pointing to an elevated probability of a recession in the next twelve months. Gold has benefited from this narrative, as highlighted by substantial safe-haven inflows recorded in past weeks. Notwithstanding, this hiking cycle differs from recent historical analogs as the Fed's ability to control inflation is limited, given that the supply-side is disrupted.''

On Tuesday, the US dollar shot higher from below 104, making gold more expensive for international buyers. US dollar bulls moved in on euro weakness as European Central Bank (ECB) President Christine Lagarde offered no fresh insight into the central bank's policy outlook. Lagarde said the central bank would move gradually but with the option to act decisively on any deterioration in medium-term inflation, especially if there were signs of a de-anchoring of inflation expectations. The US dollar index (DXY), which had made a two-decade high of 105.79 this month, was last up 0.46% at 104.420. The DXY had been as low as 103.77 and as high as 104.606.

Inflation fears have advanced again and choppy trading persists, sinking US stocks midday at the same time that a consumer confidence gauge sank amid rising inflation expectations, undermining the improvement in investor sentiment after China relaxed certain COVID-19 restrictions. The Conference Board's measure of consumer confidence fell to 98.7 in June from 103.2 in May while the Board's inflation expectations index rose to 8% from 7.5%, the highest since the series began in 1987.  The Dow Jones Industrial Average slid over 1.48% with the S&P 500 down 1.92% and the Nasdaq Composite 2.94% lower by Tuesday afternoon. All three indexes traded higher earlier in the session.

''Gold trading will likely remain a snoozefest while bears wait for a catalyst to shake-out this complacent length. In the meantime, continued whipsaws from CTA trend followers reflect the range-bound price action. 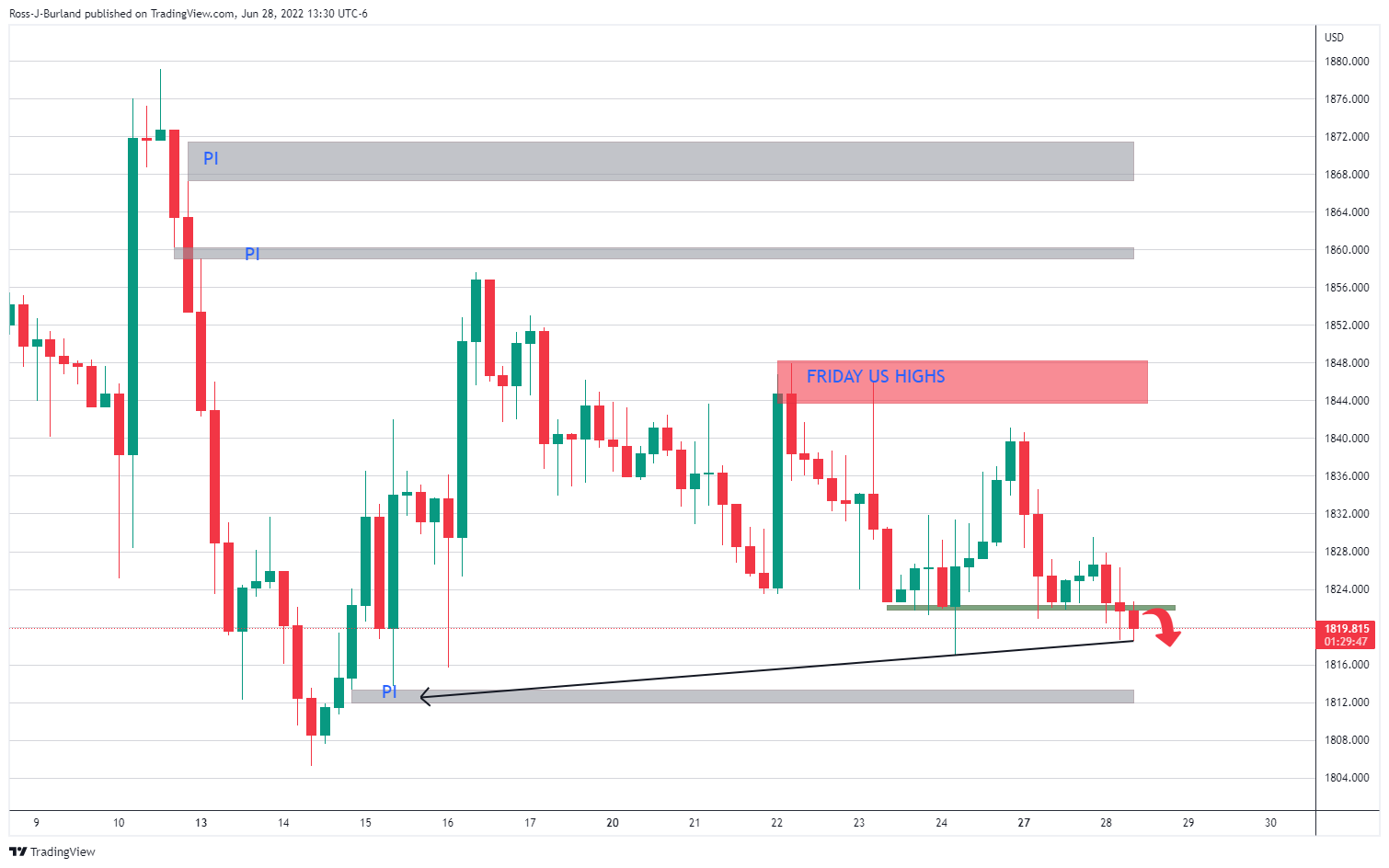 There is an imbalance of price below which could be mitigated in the coming sessions for a test of $1,812.

EUR/USD is flat at the start of the week following Friday's sell-off from the 1.0250s that reached a low of 1.0141. The move came from a blockbuster US Nonfarm Payrolls report. The price is starting to decelerate in the bull weekly correction.

Gold stabilizes above $1,770 as focus shifts to US Inflation data

Gold price is oscillating in a narrow range of $1,771.70-1,779.76 after a sharp rebound from a downside move below $1,770.00. The precious metal is awaiting the release of the US Inflation data for fresh guidance, which is due on Wednesday.