GameStop Corp (NYSE: GME) has kicked off Thursday's session with a fall after Robinhood announced it is taking several measures to limit new positions on GME options. Moreover, the trading platform announced a "reduce-only" mode on Gamestop and several other shares:  AMC, BB, BBBY, EXPR, KOSS, NAKD AND $NOK. 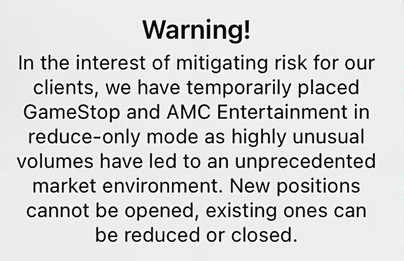 Regarding the theater company, see

The battle around short options has fueled elevated volatility in GME stock. Robinhood is one of retail traders' most popular platforms for equities, thanks to its sleek mobile interface. These shares and options have been the focus of the financial world in the past few days.

Update: GameStop Corp.(NYSE: GME) is changing hands at around $300, down by around 13% but above the lows. Buyers seem to be fighting back ahead of option expires on Friday. 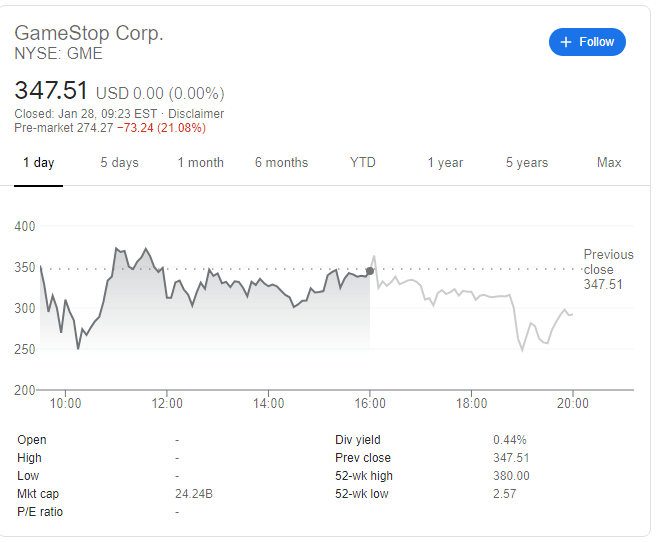 According to CNBC, "any number of large hedge funds have suffered significantly." The channel also added that Melvin Capital – which has reportedly exited its short position against the videogaming company – incurred "massive losses" An army of retail trades organized on Reddit's WallStreetBets seems to have the upper hand against financial firms.

The frenzy in GME and several other stocks has put regulators and even the White House on alert. Some worry that the frenetic action in small stocks represents a late-stage rally that signals a downfall in broader equity markets. On the other hand, the Federal Reserve refused to warn of any froth in equities, instead of focusing on helping the economy recover.