Update October 20: FuelCell (FCEL) corrected 1.72% on Tuesday from three-month highs of $8.93, as sellers ran into stiff resistance at that level once again. FCEL stock price settled at $8.59, recovering from a quick dip to $8.03 lows. The Nasdaq Composite Index recorded solid gains, although the renewed upswing in the US Treasury yields limited up gains in the equities, weighing down on FCEL share price. Investors also turned cautious heading into the earnings results of Netflix, which was due after the NY close.

FuelCell (FCEL) stock is back after a bit of a break and a fairly lackluster 2021. This was one of the early retail interest stocks that took off even before the advent of GameStop (GME) and WallStreetBets took over the retail trading space. FCEL price rose from $2.58 to $29 in about three months between November 2020 and February 2021. The company is involved in one of the hot sectors of renewable energy. FuelCel designs, makes, operates and installs fuel cell batteries, which use chemical reactions to produce energy and so are not reliant on fossil fuels. Reuters says the company's technology "generates electricity directly from a hydrogen-rich fuel, such as natural gas or renewable Biogas, by reforming the fuel inside the fuel cell to produce the needed hydrogen."

Hydrogen is generally acknowledged as a renewable and eco-friendly energy source, and hydrogen fuel cells produce no pollutants. The by-products are heat and water. Hydrogen is also extremely powerful at energy generation compared to other fuels such as liquefied natural gas (LNG) or diesel. In some cases, it can be said that hydrogen fuel cells or plants will produce two or three times as much energy per weight of fuel used.

The recent interest in FuelCel (FCEL) stock is driven by some popular Twitter accounts pushing the stock. This can be positive or negative depending on the information, so it is always important to do your own research before investing and not blindly follow someone else. This is a feature of retail stocks.

Why is FuelCell (FCEL) stock up?

FuelCell (FCEL) reported earnings on September 14. The results were better than expected with an EPS loss of $0.04 beating analyst estimates for -$0.05 and revenue beating comfortably at $26.8 million versus the $20.7 million average estimate. The shares have been relatively strong since those earnings but have struggled to break the 100-day moving average to consolidate any gains.

The $7.85 top from late September really needs to be broken to keep the momentum flowing. Retail names are all about generating and maintaining momentum. Momentum is not a dirty word in investing. Institutional players are often momentum traders too, but it is over a longer time frame. Retail traders move quickly if momentum fades or does not kick off quickly. If FCEL price does not break $7.85, it is likely that momentum will fade and traders will look elsewhere. The zone from $7.85 to the next high at $8.30 is key, and breaking through it means no resistance until $9.81.  Failure to beak higher though will mean a bearish double top and see a slide back with high volume support at $6. 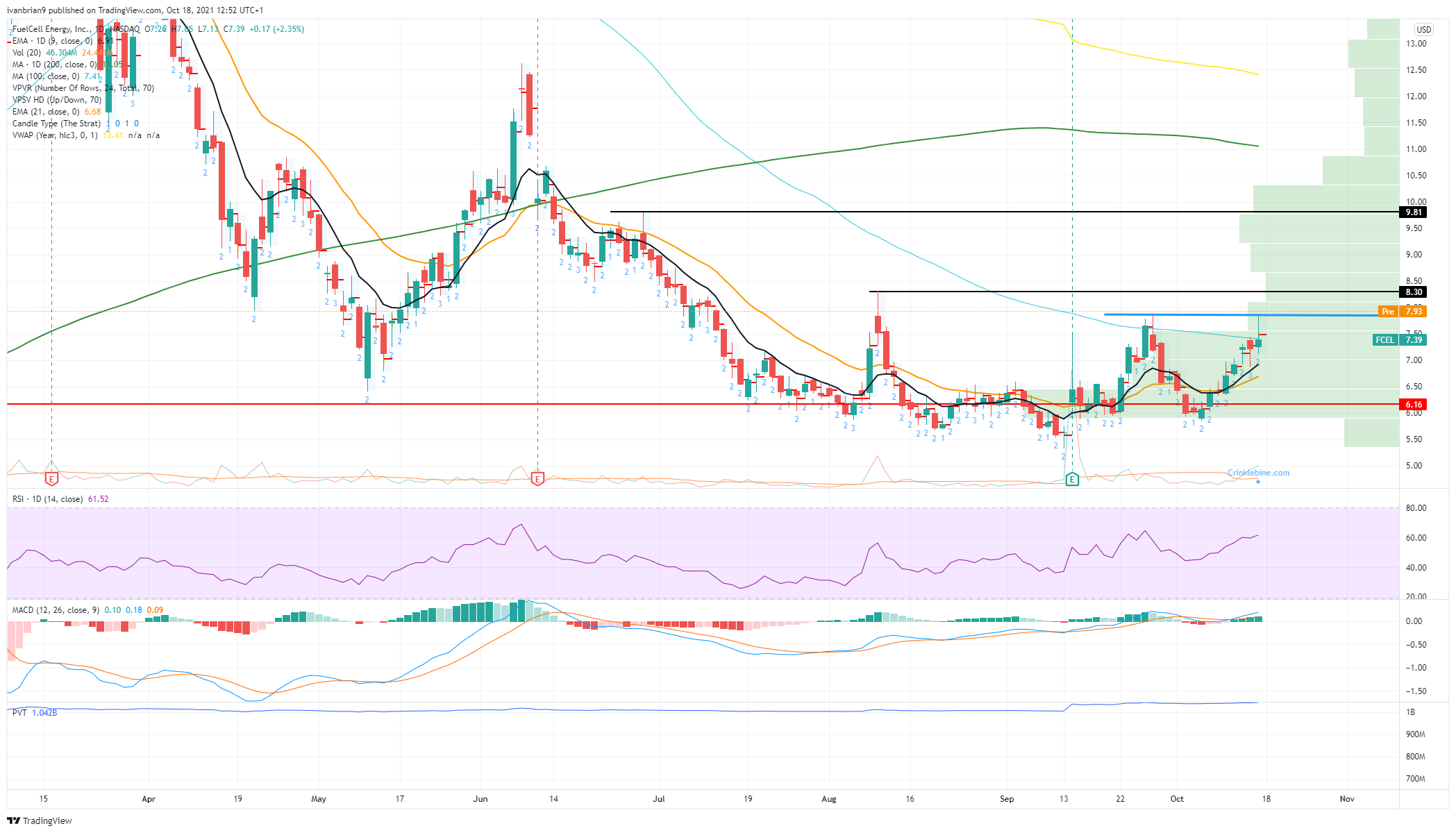 Update: FuelCell (FCEL) ended Tuesday at $8.57 per share, down 1.72%. The mild decline was mostly linked to profit-taking after the impressive rally from the previous sessions. Wall Street finished the day with solid gains, with the Nasdaq Composite up 107 points or 0.71%. However, US government bond yields also advanced, reaching fresh multi-week highs, and may negatively impact equities in the near term.

Update: FuelcELL (FCEL) stock stormed through the powerful resistance around the $8 mark and rallied hard on Monday, adding a whopping 18.27% on the day. In doing so, FCEL jumped to fresh three-month highs of $8.93 before easing slightly to finish the day at $8.74. FuelCell stock price played a catch up with the recent surge in its peer fuel cell companies Ballard Power (NASDAQ: BLDP) and Bloom Energy (NYSE:BE). This comes after Hydrogen fuel cell leader Plug Power (NASDAQ: PLUG) announced multiple corporate partnerships to manufacture fuel cell parts last week.

Update: FuelCell Energy Inc (NASDAQ: FCEL) ended Monday at $8.74 per share, up a whopping 18.27% on Monday, despite a generally soft market's mood. The share is far from the multi-year highs reached earlier this year at $29.44, although the current rally seems to be just starting. The company announced multiple corporate partnerships last week meant to scale its hydrogen-powered fuel cell parts. The NASDAQ Composite was the best performer, adding 124 points or 0.84%.

Update: FuelCell Energy Inc (NASDAQ: FCEL) has kicked off the week with a surge of some 14% to around $8.50 – the highest since early July. The day began with a leap above $8, and from there on, the only way is up. The daily high was $8.74. The Danbury, Connecticut-based company is benefiting from retail traders' interest.