The EUR/USD extends its losses in the North American session following the Easter Friday holiday, down some 0.33%, trading below the March 7 cycle low at 1.0806, opening the door for further losses amidst a risk-off market mood. At the time of writing, the EUR/USD is trading at 1.0775.

Geopolitics and ECB-Fed divergence a headwind for the EUR/USD

Geopolitics and Fed speaking continue spooking investors. Ukraine’s President Zelenskyy said that talks with Russia are at a “dead end” and emphasized that Ukraine will not trade its territory and people. He added that if Russian forces continued and destroyed the remaining troops in Mariupol, it would “put an end” to talks. The Ukrainian Foreign Minister Kuleva said that there had not been any recent contact at the Foreign ministry level in recent weeks.

Aside from this, the ECB last week’s decision of keeping rates unchanged and failing to deliver a “hawkish hold” highly expected by investors weighed on the shared currency, which finally broke below the 1.0806 mark, reaching a YTD low at 1.0757. Contrarily, Short Term-Interest Rates (STIRs), show that the odds of a 50 bps rate hike by the Fed lie in a 98% chance, further confirmed by Fed speakers late in the last week.

On April 14, the New York Fed President John C. Williams (voter, neutral) noted that a 50 bps rate increase is a reasonable option, but the pace of rate hikes will depend on the economy’s path. Williams added that the Fed needs to move “expeditiously” to normal policy levels, and a more neutral.

An absent EU and US economic docket would leave traders leaning on Fed speaking, with St. Louis Fed President James Bullard crossing wires near the end of the New York session.

The technical perspective of the EUR/USD remains unchanged, tilted to the downside, though downward pressured, once it cleared the March 7 cycle low at 1.0806. The daily moving averages (DMAs) are still above the spot price, with the 50-DMA at 1.1522 about to cross under the 200-DMA, which would form a death cross, indicating further selling pressure. 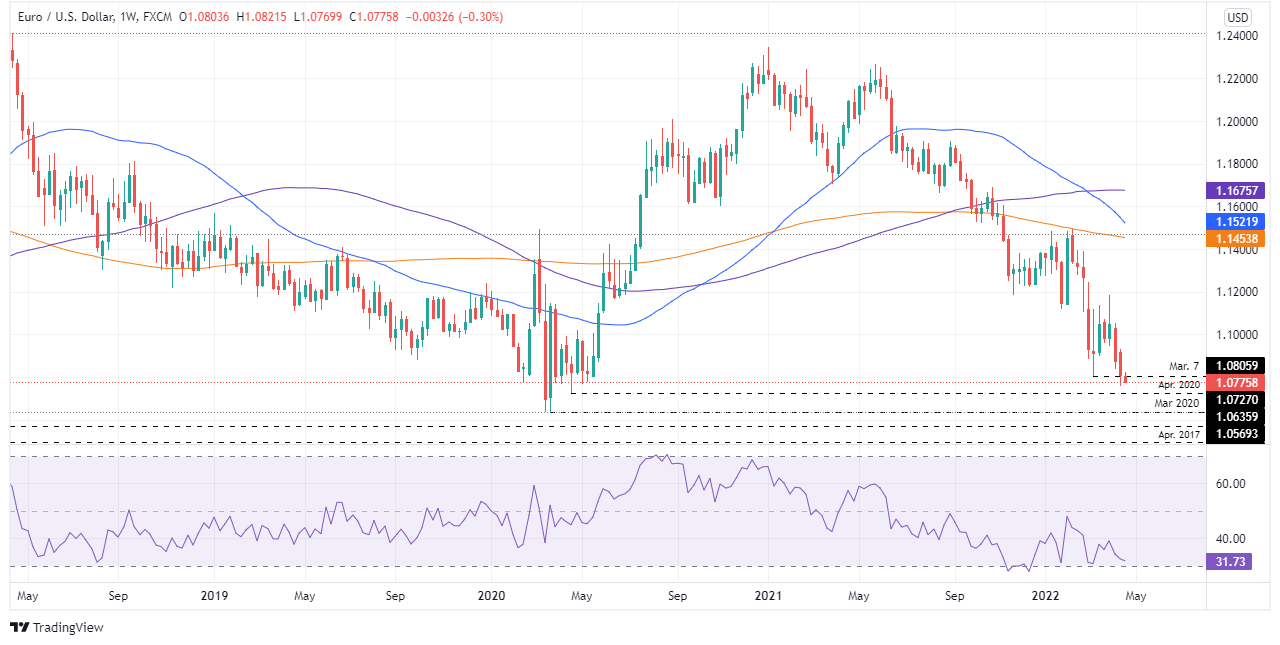