In its January month's oil market report, the International Energy Agency (IEA) offers the following projections while warning that the Mid East crisis is far from over.

US-Iran tensions and Iraqi protests had only minimal impact on oil operations.

That may make it difficult for global industry to meet rising long-term demand.

Initial reversal signal is forming on daily chart after price action in past two days ended in Doji candles and subsequent advance.

Near-term action is also underpinned by rising daily cloud which increases risk of reversal. Daily stochastic is on track to emerge from oversold zone and RSI turns north, but momentum remains strongly negative and may obstruct recovery attempts. Read more... 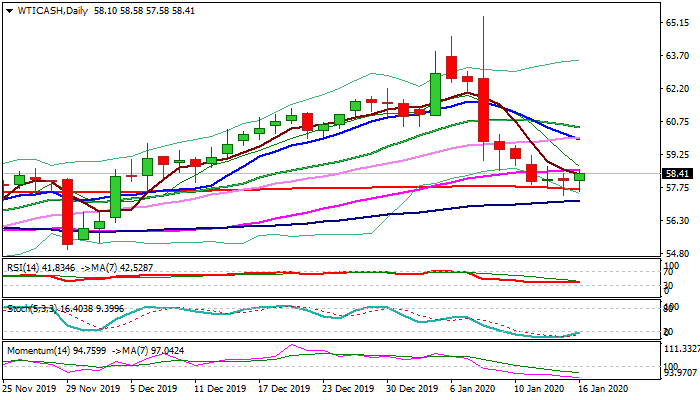 WTI drops back below $58 post-IEA report

WTI (oil futures on NYMEX) reverses the intraday gains and trades modestly flat in the European trading, having met fresh supply in the last hour after the bearish monthly oil market report from the International Energy Agency (IEA) hit the investors’ sentiment.

The IEA report showed that oil production from non-OPEC countries, including the US, is on the rise while maintaining the global oil demand growth estimates for 2020 at 1.2 million barrels per day (bpd). It further said rising non-OPEC oil production will help the market ward off any supply disruption threat such as the recent Mid East flare-up.

No sooner the report hit the wires, the black gold fell from a high of 58.37 to reach fresh daily lows at 57.88. Mixed feelings about the US-China trade deal amongst the market also keeps the recovery limited in the higher-yielding oil. Read more...

EUR/USD came under heavy bearish pressure, now trading below the 1.0100 level and at its lowest for this month. Although the data from the US showed that Existing Home Sales fell sharply in July, the economy seems resilient to global woes.

GBP/USD extended its daily slide and touched its weakest level since mid-July in the 1.1920 price zone. The broad-based dollar strength, as reflected by a more than 0.5% increase in the US Dollar Index, forces the pair to continue to stretch lower in the American session.