UPDATE: Following an entire weekend of hot takes on Twitter that Credit Suisse would imminently go bust, CS stock has actually advanced 2.6% to $4.03 an hour into Monday's session. After falling as far as $3.70 in the first 15 minutes, Credit Suisse stock has spent the rest of the session so far climbing steadily. Over the weekend credit default swap spreads on the bank's bonds reached 250 basis points. Analysts at KBW estimated the bank would need to raise as much as $4 billion. The bounceback in the stock price may be due to the fact that the entire market has decided to turn a page after a dreadful September. As the first trading day in October, many pundits are talking up the possibility of a bear market rally. The Nasdaq is up 1.7% at the time of writing, while the Dow has advanced 2.1% and the S&P 500, 2%. Surprisingly, the Russell 2000 is up more than 2.2%. Due to a poor delivery figure released over the weekend, Tesla (TSLA) is the laggard. Shares are down 7%.

Credit Suisse (CS) is battling to reassure investors as rumors go into overdrive this past week. The Financial Times reports that senior executives spent the weekend talking to clients and counterparties about recent developments that have seen the share price tumble and CDS spreads widen.

Various reports emerged this weekend, but the FT reports that Credit Suisse executives must have had a busy weekend. The newspaper says senior executives took to the phones over the weekend to try and reassure investors and clients as to its liquidity and capital position. It appears Reuters first reported last week that Credit Suisse approached investors about a capital raise.

However, the report quotes an executive as denying Credit Suisse had approached investors about such a potential capital raise. The move in CDS spreads and the stock price appears to have alarmed some investors. Credit Suisse stock has fallen over 25% in the past month and on Monday morning is down nearly 8% in Switzerland. Credit default swaps are basically insurance on bonds against default.

Credit Suisse’s 5Y Credit Default Swaps (CDS) [the cost to insure the bonds of $CS] spreads are approaching 2008 levels, the time of the global financial crisis. Markets are sensing a lot of RISK in $CS and Europe generally. pic.twitter.com/r5GjQcIxpk

Is there truth to the various media reports and social media rumours? The facts will eventually emerge, but what we need to determine is whether this bad news is already in the price. As we can see, CS stock is in a powerful downtrend. It is now showing a strongly oversold signal on the daily chart. If the company does manage to create some stability, it could set up for a powerful reversal. Sentiment must be close to max bearish, and while we do not yet have any short interest data it must be growing. However, the risk remains high in the current environment, and more clarity is required. 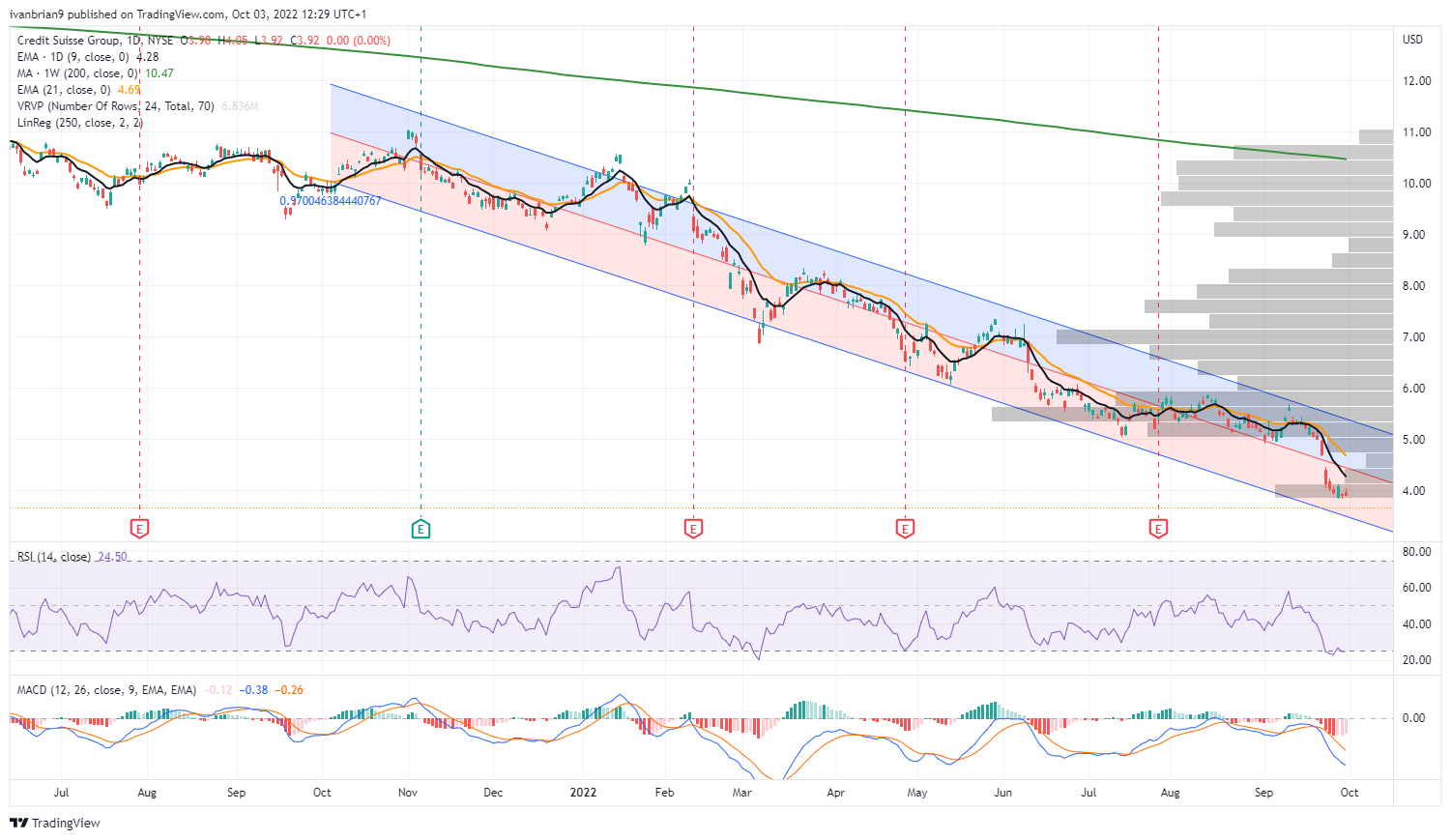