Crypto stocks were the hot sector on Monday as the rally in Bitcoin continues. The move was started by market man Powell, normally so kind to equity markets, but this time taking a shine to crypto as well. He said last week in testimony that there were no plans to ban Bitcoin, which sent the crypto leader on a charge. Worries had been high as China has been cracking down regularly on the crypto sphere and targeting Bitcoin activity among other crypto currency activities. Bitcoin broke above $55,000 and has held there and now is pushing to toward $60,000. With such a powerful tailwind, there was only one way to go for crypto stocks on Monday and most registered strong surges. COIN stock rising just over 3% made it actually a laggard when stocks such as RIOT and MARA popped between 6% and 7%.

The analyst community remains bullish on COIN stock ahead of the next earnings release. Certainly, competitor Binance looks to see soaring volumes as data from CryptoCompare.com compiled for Reuters showed volumes surging between July and September, despite some regulatory pressure. Recently, Oppenheimer analyst Owen Lau said COIN is likely to top earnings estimates for the third quarter due out in November. This is due to recent volatility in the price of Bitcoin. As it was written before the latest surge in the price of Bitcoin, this adds further weight to Lau's argument.

A rather tentative lower support line shows that each spike lower actually bottomed out higher than the previous one and possibly alerted us to the fact that COIN may have been in an uptrend all along since May. Who would have thought? The narrative had been the weakness since the IPO. Now COIN is above the 9 and 21-day moving averages and also the Moving Average Convergence Divergence (MACD) has crossed into a bullish signal. Getting above $265 brings COIN stock into a light volume zone as shown from the volume profile bars on the right of the daily chart below. The target and resistance will then come from the Volume Weighted Average Price (VWAP) at $273.

Our call form last week: "On Tuesday we said COIN will be bullish if it breaks $245.80, and this is duly what transpired on COIN stock, but we wanted confirmation of the move from the Relative Strength Index (RSI) and a crossover from the Moving Average Convergence Divergence (MACD) to confirm this."  We remain bullish. 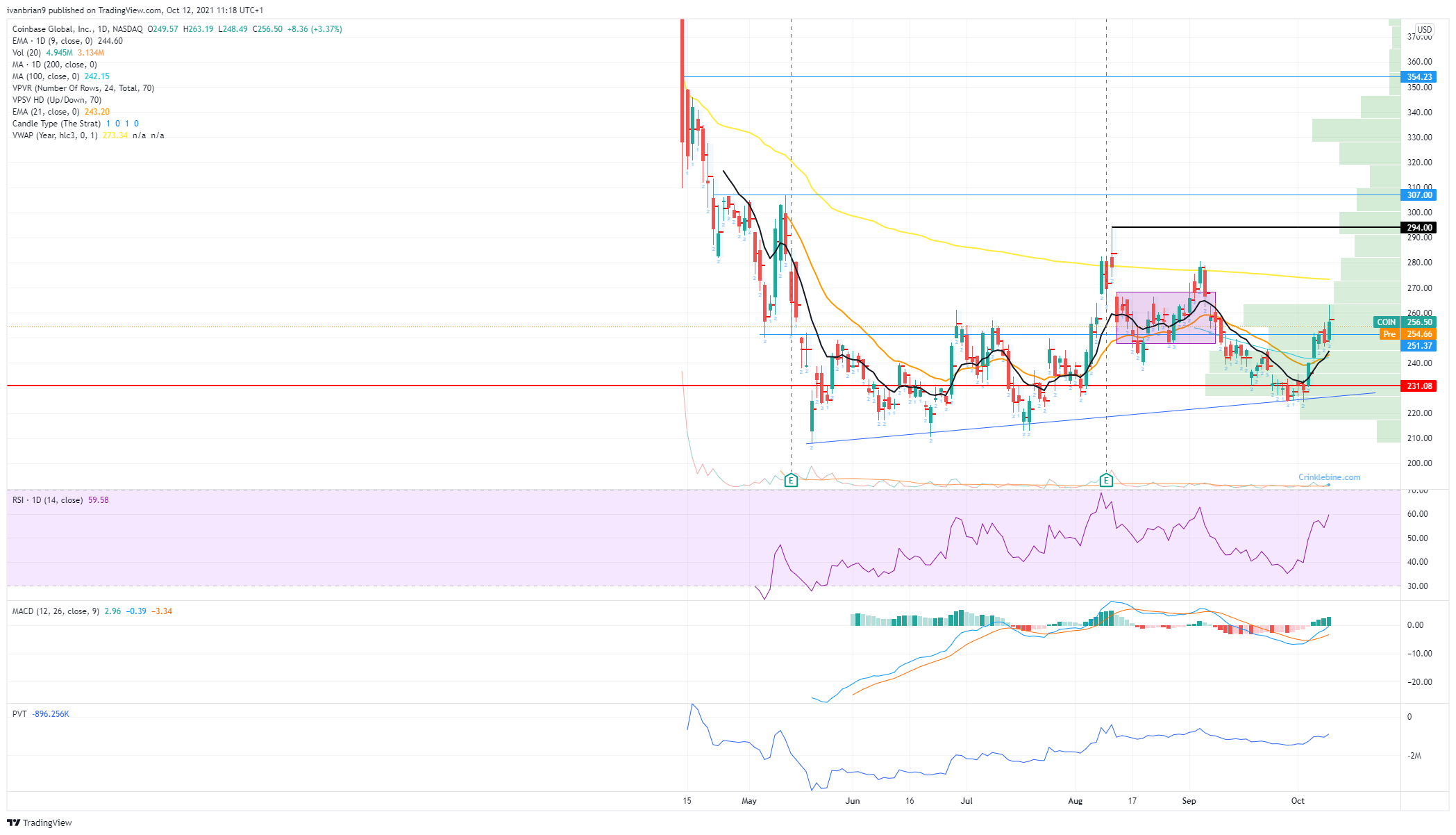