Update April 15, Thursday: After a dream debut for the cryptocurrency exchange Coinbase Global Inc. (COIN) on Nasdaq at $381, the shares rallied as high as $429.54. Although the upswing failed to sustain, as Bitcoin fell from record highs and tech stocks tumbled across the board. The shares of COIN closed Wednesday at $328.28, down 14% from their opening price. The valuation for the cryptocurrency exchange fell to about $86 billion after surpassing the $100 billion threshold in opening trades. Nasdaq on Tuesday set a reference price of $250 a share for Coinbase’s direct listing.

Coinbase (COIN) Global Inc's stock opened at $381, 52.4% above the reference price of $250, in the highly-anticipated Nasdaq debut on Wednesday. Currently, COIN is trading at $369.08 and the company is valued at almost $100 billion.

During the first quarter of the year, San Francisco-based cryptocurrency exchange's shares were trading privately at a volume-weighted average price of $343.58.

According to the SEC filings, the company has 56 million users globally and carries an estimated $223 billion worth of assets on its platform. 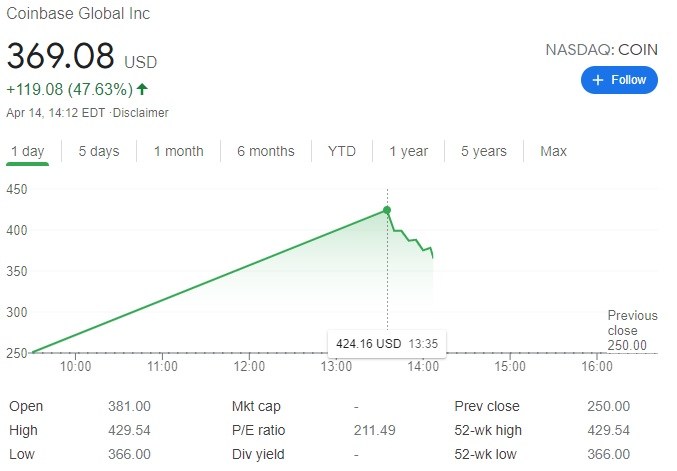