Citigroup (#Citigroup) is a financial group with a market capitalization of $146 billion that conducts business in more than 100 countries. It is expected to report results for the quarter ended September 2021 on October 14, before the market opens. Zacks forecasts return on equity at $1.77, lower than the previous three quarters’ yield but higher than the same quarter last year at $1.40 per share. Meanwhile, sales for the quarter were $17.11 billion, below the previous two quarters and below the $17.3 billion in the year-ago quarter. As for sales growth, the company fell -15.2% last year and -9.02% last quarter.

For its third-quarter earnings report this week, the focus will be on the major US banks – Wells Fargo, Bank of America, JPMorgan Chase and Citigroup – which are expected to report a total of $33 billion in profit. However, the banking sector is facing significant risks due to rising inflation and supply chain bottlenecks which are causing the global economic recovery to slow down. This could lead to stagflation, a stagnation accompanied by inflation fueled by rising energy prices, and so investors will be keeping an eye on the US September CPI inflation report on Wednesday October 13 (before the Citigroup report), which is expected to be 0.3% monthly and 5.3% annually.

Although the September job numbers were the lowest this year, continued high levels of inflation may lead to a reduction in QE in November and an interest rate rise next year. As previously reported by the Fed, this will have a direct impact on the banking sector that will result in a decrease in credit demand. The Fed’s signal was in line with the Reserve Bank of New Zealand’s (RBNZ) interest rate hike last week. The Bank of England (BoE) is also expected to raise interest rates within this year.

In addition, the postponement of consideration of increasing the US debt ceiling and Evergrande‘s debt problems, as well as the crackdown on Chinese tech firms, are considered factors of uncertainty in the banking sector for the rest of the year.

As for the trend, Citigroup’s share price year-to-year is up 14.56% and 3.62% in the current quarter alone. However, from a technical point of view, the company’s share price is trending lower from the previous quarter. After trying but being unable to break through the 74.00 resistance zone this week before the 3rd quarter earnings report, the price has dropped to test the MA20 line (adjacent to the MA200 line) again at 70.68. The price could break down to its 66.00 support target, and with the Fed’s interest rate hike trend, the company’s share price could once again enter the 57.00 low zone of the year. There will be a significant upward target at 74.00. 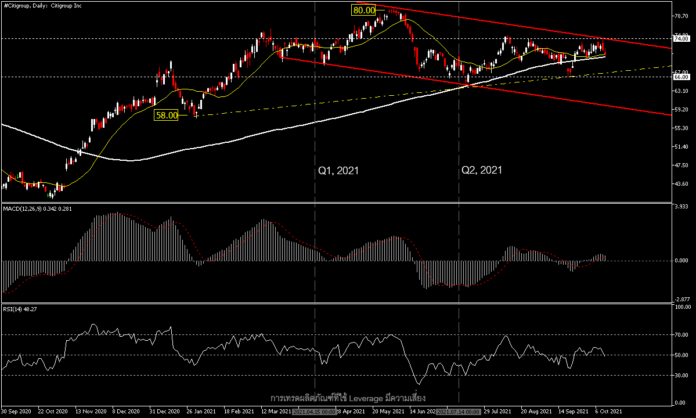