Update Tokyo August 20: Marred by the regulatory overhang, as per details below, Alibaba shares extended the downside on Thursday with the price marking out a fresh cycle low of $159.51. Significantly, the price has penetrated the 200-week smoothed simple moving average and trend determining metric at the price level of $168. This potentially leaves the stock into a technically bearshish scenario for the weeks ahead. The drop has even surpassed the -61.8% Fibonacci retracement level of the prior bullish correction of $164.89.

Update: Alibaba shares slumped 4% in early trading on Thursday as the negative sentiment toward the stock continues and investors keep on dumping it. BABA broke the old lows from March 2020 at $169 and is currently trading at $165 in early trading down 4.1%. Once into the low $160's volume thins out alarmingly meaning support is less and less strong so this is the last chance saloon. 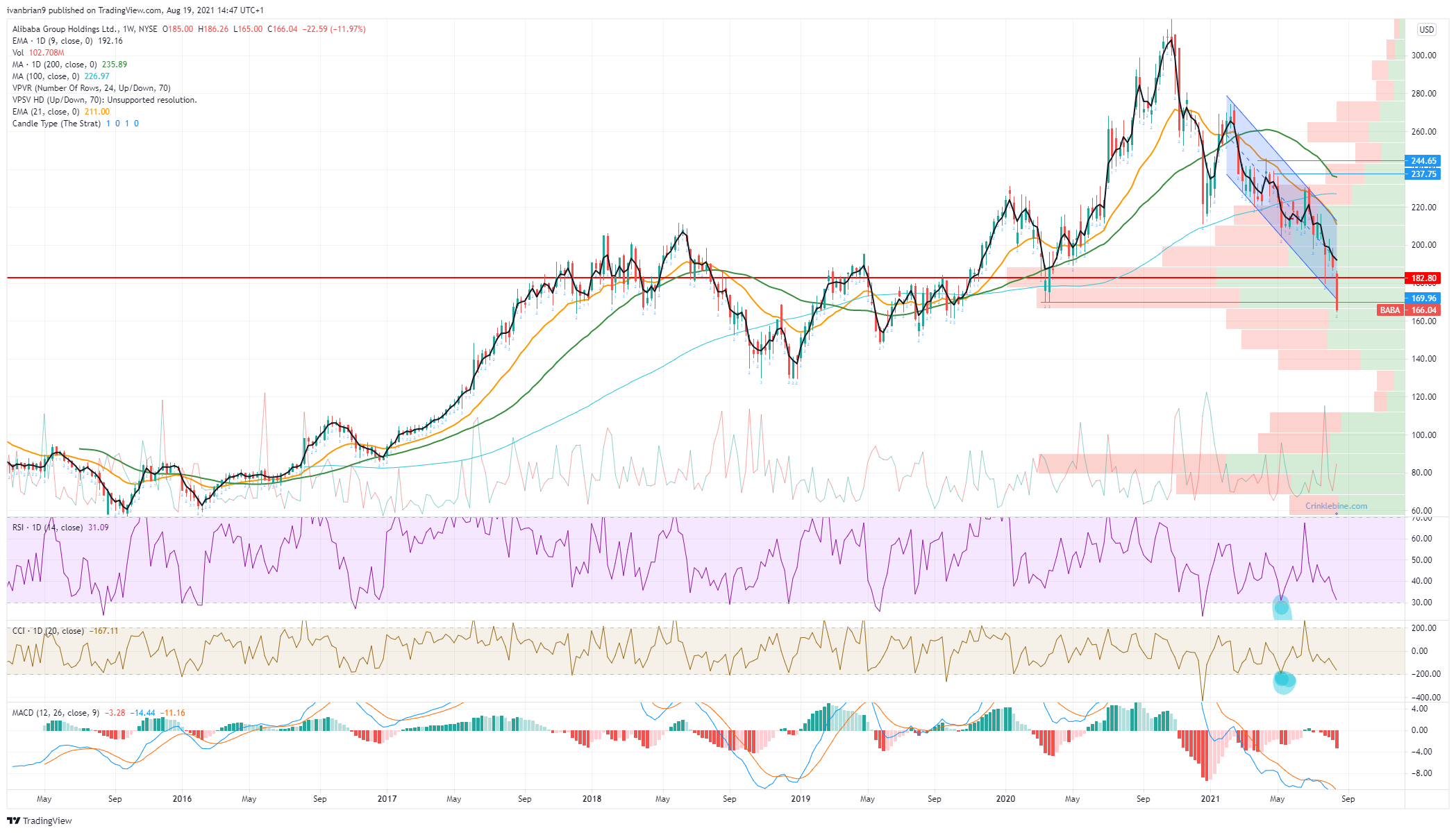 Update August 19: Alibaba shares fell 0.79% on Wednesday to finish near 17-month lows of $172.11, tracking the tech-sector sell-off amid Chinese crackdown. A fresh round of regulations on China’s online companies has been the main reason for the recent declines in BABA stock. Further, FOMC minutes showed that tapering of bond-buying in well on the cards in the coming months, which spooked investors and collaborated with the downside in BABA shares. The stock price is at the lowest levels since the coronavirus pandemic began.

NYSE:BABA shareholders will be happy that this week is over after the company was slapped with a sexual assault scandal after being mired in a government probe earlier this year. It is just the latest in a series of speed bumps for the eCommerce giant, in what has been a mostly forgettable year thus far. On Friday, shares of AliBaba fell a further 1.59% to close the trading week at $188.62. Shares of BABA are trading well below both the key 50-day and 200-day moving averages, and will continue to do so given the rapid decline of the stock price.

Cathie Wood of Ark Invest continued to dump shares of AliBaba on Thursday after selling another $1.55 million in stock. Wood had several Chinese ADRs across multiple Ark ETFs, but over the past few weeks has been trimming her positions amidst the ongoing crackdown by the Chinese government. Wood has also notably sold off large blocks of shares in Tencent (TCEHY) and JD.com (NASDAQ:JD) as well. It should be noted that Softbank’s CEO Masayashi Son also reported that the Vision Fund would be stepping back from investing in Chinese companies for the foreseeable future, until the current fervor has died down.

Speaking of Tecnent, the tech conglomerate that has been the target of the Chinese government as of late will report its quarterly earnings next week. Chinese stocks have been selling off after earnings as of late, including AliBaba, Baidu (NASDAQ:BIDU), and Nio (NYSE:NIO). There is a strong possibility that we continue to see this trend with Tencent next week.

Update August 18: Alibaba Group Holding Ltd (NYSE: BABA) finished Wednesday at $172.35, down 0.78% on the day. The NYSE Composite Index lost 157 points or 0.94% after the US Federal Reserve released the Minutes of its latest meeting. Policymakers have escalated tapering discussions and investors took due note of it. The share trades at its lowest for 2021 and seems poised to extend its decline, despite being under pressure pretty much since the month started.

Update: Alibaba Group Holding Ltd (NYSE: BABA) has been extending its decline in Wednesday's trading, and as of writing time, it is changing hands at around $173, levels last seen in the autumn of 2019. Despite growing sales during the past period – some triggered by the outbreak of COVID-19 – shares of the online emporium have suffered from China's backlash against powerful tech companies. What seemingly began as a personal issue against Alibaba founder Jack Ma has since turned into a broader attempt to bring the firm and other companies in line.

Update: Shares in Alibaba saw another big bearish opening gap on Tuesday and accentuated its downside, adding about 5% to its weekly losses. BABA stock finished the day at the lowest levels since March 2020. The ongoing crackdown by the Chinese regulators on the country’s technology sector, with the authorities reportedly planning a new privacy law that will impact the collection of user data, weighing heavily on Alibaba’s share price. The negative close on the Wall Street indices amid renewed covid concerns also exacerbated the pain in BABA stock.

Update: Shares in Alibaba took another big hit straight from the open on Monday with the stock down 3% after just thirty minutes of the regular session. Sentiment has not been favourable to many Chinese names over the last week or two and the trend is continuing on Monday. Overnight some weak data from the Chinese economy has fuelled fears of a slowdown and those pesky Chinese regulators have not gone away you know. News of Tencent Music (TME) pulling its Hong Konh lisiting have fed through to the Chinese sector.