Apple (AAPL) is on a steady move higher ahead of results next week. We have had solid earnings from big names already such as Tesla (TSLA) and Netflix (NFLX), but Apple is the biggest one of all and will be the highlight of the earnings season for many. In advance the shares have been climbing steadily of late, for the most part, tracking the move higher in the S&P 500 as it turned out the dip was transitory.

Inflation might not be so transitory though as yields keep on rising and the Nasdaq names do not like higher yields, so next week might be interesting. However, as things stand AAPL stock is in a strong healthy position trading above the short-term moving averages. It has moved over $10 higher now from the lows in early October.

We can see from our intraday chart above that Apple has been trending steadily higher but has run into some resistance around the $150 level.

News breaking from a Reuters exclusive this morning is that talk between Apple, CATL and BYD in China over battery supplies for a potential electric vehicle have stalled after the companies refused to solely cater for the tech giant. The Reuters exclusive cites three sources. CATL is the world's leading maker of batteries for electric vehicles but has no US manufacturing site, which Apple was requesting. BYD does have a plant in Lancaster, California, but it would not build a new factory and have a team solely dedicated to Apple, according to the report. Panasonic is being considered as an alternative battery supplier. Apple BYD and Panasonic did not comment. CATL said in a statement to Reuters that it denied "the relevant information."

"We are evaluating the opportunity and possibility of manufacture localization in North America," the statement said, adding that it has a dedicated professional team exclusively for each customer.

Apple staged a nice double bottom on October 4 and October 6 with a then higher low on October 13 confirming the setup. $150 is obviously the psychological resistance, and $151.42 is resistance from the retracement after the steep fall on September 10. We do have divergences from both the Relative Strength Index (RSI) and the Moving Average Convergence Divergence (MACD). Bearish divergences are significant, so keep an eye on this one. With stock indices just making record highs on Thursday, there is also the potential of a double top in the indices, so also watch this space. Earnings on October 28 though will be key to future direction. Supply chain issues may feature, so that is likely to be key. Failure at $151.42 will confirm a new bearish trend, with below $138 the next target if so. 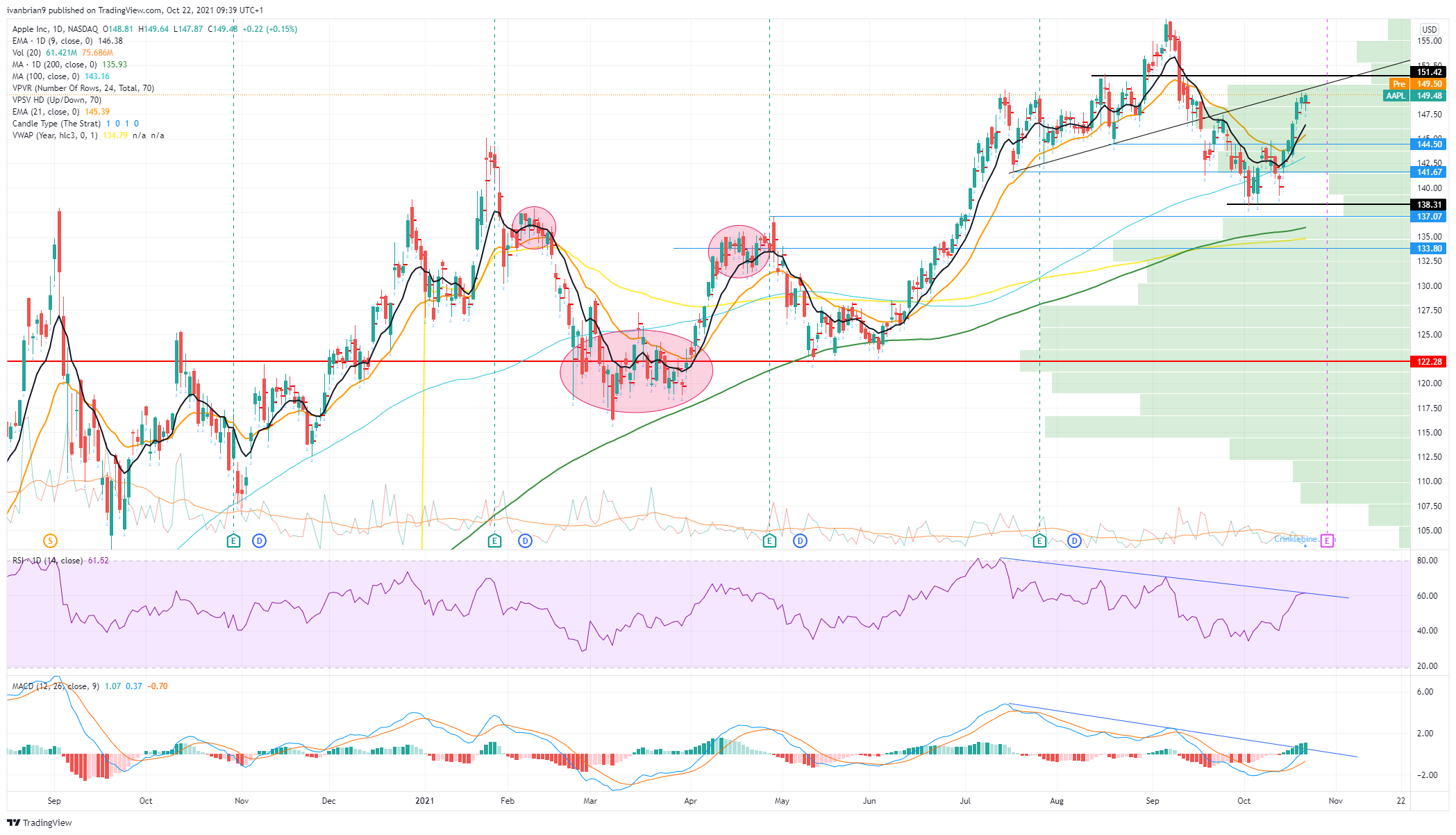