Apple stock broke out properly on Monday, putting in a strong intraday turnaround. A strong opening to the regular session on Monday saw Apple trade up to new highs before swiftly turning around as the broad market started to look ugly. Most equity indices were in the red, but despite some concerns over increasing Delta lockdown globally, equity markets regrouped at halftime and soared after lunch. Apple stock closed at a new all-time high of $151.12 in the process and making for a strong breakout of the wedge formation.

We had actually been bearish on the stock but had at least recommended an options strangle strategy, which is working out well for those who took the advice. Options strangles are a strategy designed for breakouts but used for when you are not sure if the stock is going to break higher or lower. Strangles involve buying an out of the money call and an out of the money put. Our call from Thursday last week: "A $135 put for August 27 costs about $0.30 cents per share. If Apple breaks $141.67, it should move pretty quickly toward $133.80. If you are bullish and see a breakout to new highs, then a $155 call for August 27 costs $0.19 cents per share."

Checking in to see how this strategy is working out, our $135 put has dropped in value from $0.30 to $0.15. Not great, but then Apple has popped. Our $155 call, however, has exploded in value to $0.97. Our strategy cost $0.49 a share and is now trading at $1.12, which is up 128% since last Thursday. Even though we got the bearish call wrong, we still managed to bank some strong profits based on a breakout strategy. Hopefully you banked, as we just gave the advice. We did not actually trade it. Doh!

Monday's move was a strong one and eliminated any bears from the picture. The breakout of the wedge confirms it as a bullish continuation pattern, and the double top we had identified never triggered. To recap, a double top needs to break the valley low from the first high to trigger. This was $141.67. Instead, Apple has pushed through and made new all-time highs. Support now comes in at $150, the old all-time high and a nice psychological round number. The top of the wedge formation is also support. This is at $149 and is where the 9-day moving average will sit today. Any retracement would need to hold the latter $149 level to maintain the bullish trend in place. Given that the stock is at all-time highs, there is not much in the way of resistance. 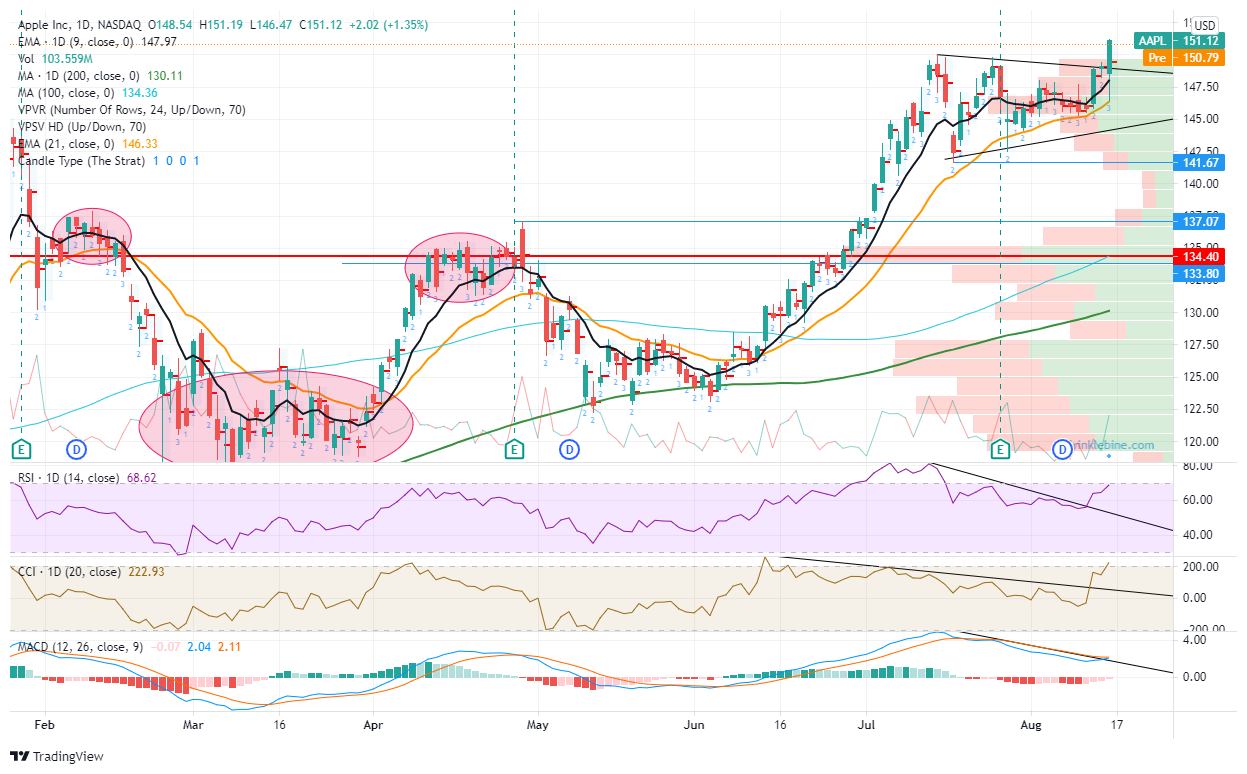