Update July 20: Having opened with a sharp bearish gap on Monday, Apple (AAPL) lost 2.70% on the day and settled at $142.45, tracking the 152 points sell-off in Nasdaq Composite amid escalating concerns that the Delta covid strain could threaten the global recovery. Reports that spyware from Israel-based surveillance software company NSO Group is capable of breaching even the latest generation of iPhones through zero-click attacks, weighed heavily on the iPhone maker. AAPL shares fell for the third day in a row, in a correction from an all-time-highs of $149.98, as investors brace for its Q3 earnings results due out next week.

Apple stock remains in a strong bullish uptrend, but the short-term end goal looks a bit more questionable now that the broader market has turned around. We are now behind the most bullish time of the year, the first two months of July, and heading into results season with some high valuations. Can they be sustained? The investment banks certainly produced strong results, and soon it will be the turn of the tech titans. However, strong results do not necessarily mean strong stock prices. In Q2 Apple results came in over 40% ahead of Wall Street analyst expectations, but the stock fell in the days and weeks after results.

The recent move to new record highs we have been calling for since early June has stopped out for now at $150, a nice psychological round number. There are a few reasons at play here. The market has finally started to run out of bullish momentum with S&P, Nasdaq and other indices all showing fresh losses again on Monday. The seasonality effect is now over, the first two weeks of July are the most bullish of the year. Results are next week, so many traders who have ridden the recent strong trend will close positions ahead of results. Taking a position into a big event, be it earnings or some other announcement, means increased risk and dealing with an unknown outcome. Seasoned and pro traders will likely cut risk into such an event.

Technically, the Relative Strength Index (RSI) is also overbought and has been this way from the last number of sessions. The previous high at $145.09 acts as an interim support as this corresponds nicely with the 9-day moving average. A break of this level could see a retracement back to $137-135. This is a nice strong support zone with plenty of volume to add to support from the volume profile we can see on the right of our chart. From $145 to $137, the volume is still pretty light, meaning there is not much support in evidence. 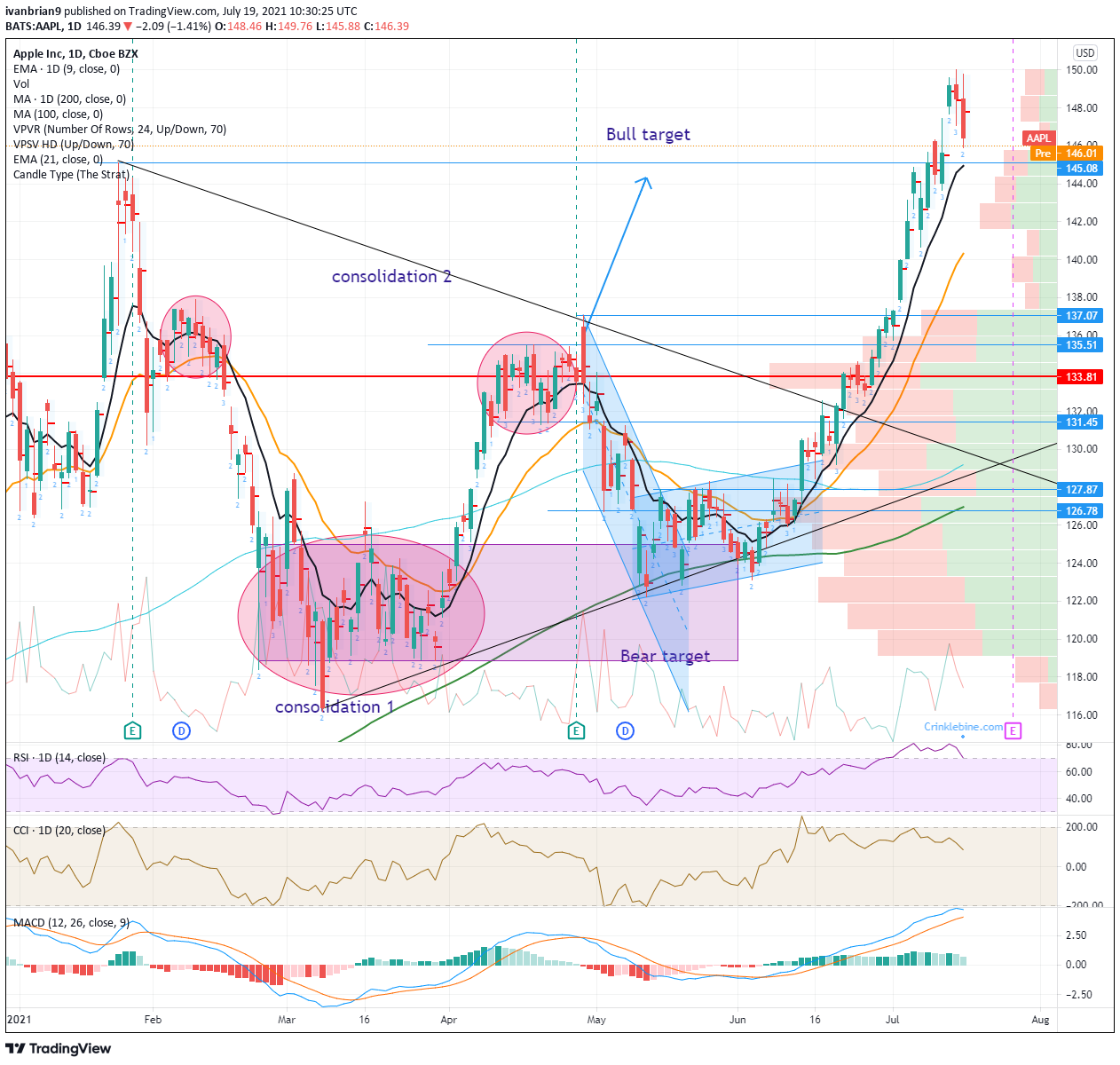 Update July 19: Apple (AAPL) finished Monday down 2.69% at $142.45, as fears dominated Wall Street. The Dow Jones Industrial Average plummeted over 900 points intraday, ending the day minus 725 points. The S&P lost 1.59% while the Nasdaq Composite shed 1.06%. Heating US inflation fueled concerns the Federal Reserve will have to retrieve sooner than anticipated. Additionally, the coronavirus Delta variant is rapidly spreading in the Northern Hemisphere, spurring concerns about a slowing pace of economic recovery.