As Equites wade through the usual flood of earnings results that characterize the heart of the season, the markets also grapple with diverging virus and vaccine developments globally, with improving conditions in the West while Asia, and especially India and Japan, have become covid hotspots. Even though in the US the FOMC is in the spotlight even as it is widely expected to maintain an unchanged policy stance,  there are several items that are vying for attention. That is the massive earnings calendar, the heaviest of the season which this week includes the FAANGS, i.e. Facebook, Apple, Alphabet, and Microsoft.

As well as the FAANG giants which are in the spotlight, Amazon – the world’s third largest company by market capitalization – Mastercard and Twitter are also due to release their earnings report on April 29 after US market close.

Amazon is the company that is expected to experience another massive surprise in its Earnings reports. Amazon has a market capitalization of $1,634 billion, following a $125 bln sales gain in the last quarter of 2020. The new projects that Amazon announced last year in regards to its gigantic turn on renewable energies could be seen bearing fruit and could make the company the largest-ever corporate purchaser of renewable energy.

According to Amazon: “We have now invested in 6.5 GW of wind and solar projects that will enable the company to supply its operations with more than 18 million megawatt hours (MWh) of renewable energy annually. This is enough to power 1.7 million U.S. homes for one year. These projects will supply renewable energy for Amazon’s corporate offices, fulfillment centers, and Amazon Web Services (AWS) data centers that support millions of customers globally. They will also help advance Amazon’s goal to be net-zero carbon emissions across its business by 2040. Part of that commitment is powering Amazon’s infrastructure with 100% renewable energy, and the company is now on a path to achieve this milestone by 2025, five years ahead of the initial 2030 target.”

Similar to last year, e-commerce, which  already benefited during the pandemic period and looks to continue due to the 2nd and 3rd wave of Covid-19, could once again further boost further Amazon’s wealth.  The continuation of stellar ecommerce, along with the strength in the recovery and the record trillions of dollars in fiscal stimulus, should balance the possible negative impact of reopening to online consuming firms, on the evident success in Covid vaccination programs in countries that have advanced rollouts. The risks ahead also fall on the tax side as President Biden is expected to roll out a plan to raise taxes on the wealthiest Americans, including the largest-ever increase in levies on investment gains, to fund about $1 trillion in childcare and other social spending.

The report  due on Thursday will be for the fiscal Quarter ending March 2020, which according to Zacks Investment Research, is expected to experience a near quarter rally of its Earnings Per Share (EPS),compared to last year, at $9.65 from $5.01, which reflects a near double rise. In Q1, the company’s sales are seen between $104.51 billion and $107.43 billion, with the yearly change seen at approximately 39% . Amazon has beat revenue forecasts in the last nine quarters. 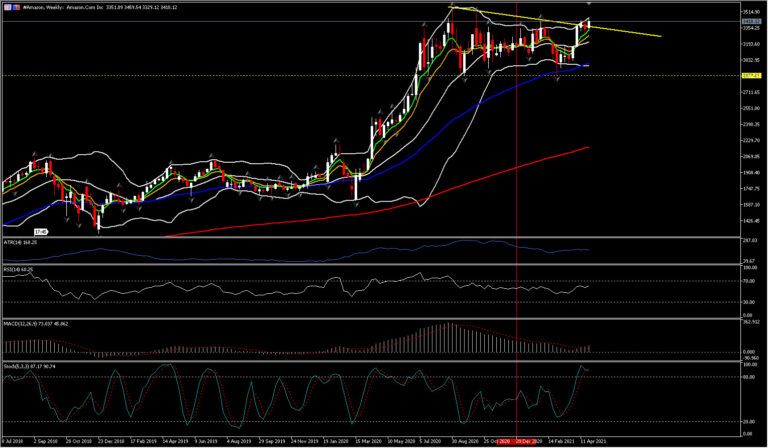 Amazon Web Service, as the biggest part of Amazon’s income is derived from its cloud segment. Amazon Web Services (AWS) has posted a significant increase in both sales and operating income year after year, but has skyrocketed this year more precisely due to the pandemic-induced growth of the work-from-home economy. Additionally, AWS made Contact Lens for Amazon Connect, Amazon Timestream, Amazon Fraud Detector, AWS IoT SiteWise and Amazon Interactive Video Service generally available. Hence all the above have attracted business to Amazon and this reflects AWS as  a key metric for investors on tomorrow’s report.

Amazon’s share price appears to have stalled around $2,800-3,400 in the last year, while in the past 2 months it has appreciated significantly as it rebounded and returned close to its record highs area. It is currently traded only 3.7% below all record highs and has been strongly sustaining the $3,000 floor in April.

Twitter is also expected to have  stellar Q1 2021 beats on earnings, revenues and advertising sales. In the last 3 quarters it beat expectations as it saw growth in daily users due to the global lockdowns as people turned to Social Media platforms, while even though in the case of Amazon, the e-commerce business is one of the main drivers of company’s business, in the case of Twitter, the e-commerce has been a tailwind to the company’s advertising business since the 2nd quarter of 2020. Twitter online advertising business has increased 11% since the fourth quarter. However, the company is far below  the elite of advertising businesses, i.e. Alphabet, Amazon and Microsoft. For the months ahead however, as vaccinations continue and  economies re-open, Twitter could be boosted by the return of the small business. Hence the return of the small businesses could significantly boost  Twitter’s ad spending in contrast with Amazon which benefitted from the closure of small retailers.

Digital advertising has proven itself to be a high-margin business at scale. The successes of Google and Facebook have clearly demonstrated that, and those effects are now becoming visible at smaller social media companies like Twitter and Pinterest.

Twitter is a unique platform with hundreds of millions of engaged users. There are ample opportunities for the company to monetize and expand with products like Space and Super Follows. Its momentum has also carried past the Trump era, which is promising as it shows that the platform is more than just a megaphone for newsmakers. 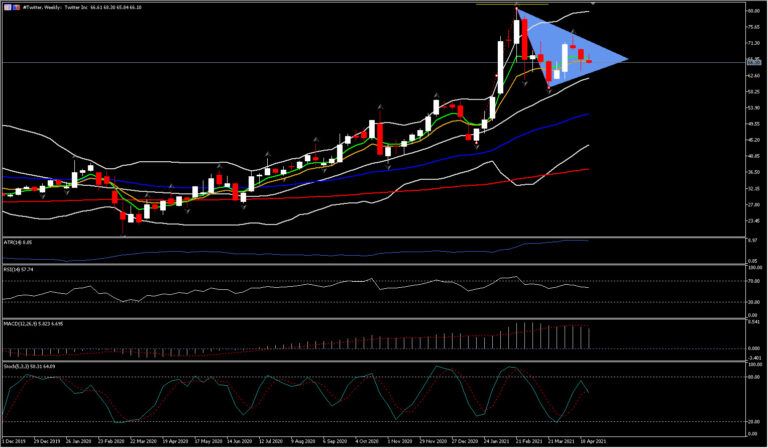 Ethereum price continues to follow all crypto and non-crypto markets in a broad risk-off sell-off. Ethereum bears, which targeted the $2,900 value area, succeeded and now focus on $2,500.