Apple (AAPL) stock surged on Tuesday despite a market meltdown created by Fed Chair Jerome Powell. Powell is usually a friend to the markets, but he stuck the boot in on Tuesday as the monster he has created with pumping and printing appears to be getting out of control. Inflation is rampant in the US and Europe, and it does not look too transitory. The Fed finally appears to have come to that realization and now needs to run a catch-up play with the inflation train. All this helped equities dump once again on Tuesday with the Nasdaq and S&P 500 both down over 1.5%. Apple though surged to an all-time high close of $165.30 and a gain of over 3% on the day. This amounts to a net outperformance of nearly 5% versus the main indices.

The catalyst for the strong outperformance and move to all-time highs for Apple stock is not clear. Apple is a huge cash generative stock, so it does have some defensive qualities in times of market stress. However, Apple has also been affected by supply chain issues recently and the dreaded semiconductor shortages. Apple users are strongly loyal to the brand, and that should enable it to pass on any cost increases in an inflationary environment.

We also note yesterday a report from AppleInsider.com stating that Apple iPad sales in Western Europe were ahead in the third quarter of 2021, while other brands lost ground. DigiTimes Asia also ran an article yesterday stating that iPhone sales were strong in China for October. "Strong unit sales of the new iPhone 13 already boosted Apple's share of China's smartphone market to over 20% in October, up from less than 5% in September, according to figures from the China Academy of Information & Communication Technology (CAICT)."

Now we definitely need Apple to push on and avoid the dreaded double top. It feels strange to say that in such a strong performance, but we have one currently clearly identifiable on the daily chart. Double tops are strongly bearish signals.

To cancel it out Apple stock needs to power on to $170. On the flip side, an inverted head-and-shoulders pattern is also showing. The head is the dip on November 26 and the double tops are the two shoulders. An inverted head and shoulders is bullish. Which one is going to win? If only it were that easy. Knowing the potential is half the battle.

Breaking toward $170 would set a breakout target nearer $180, and then the lure of $200 before year end would be powerful. The target of a double top would be the size of the valley between the two tops. In this case it is $9, so a target of $147 seems appropriate. As it happens, $147 is a huge volume profile and strong support. $200 is a big call, but seasonality and the Christmas rally are powerful factors in the performance of the S&P 500 historically. 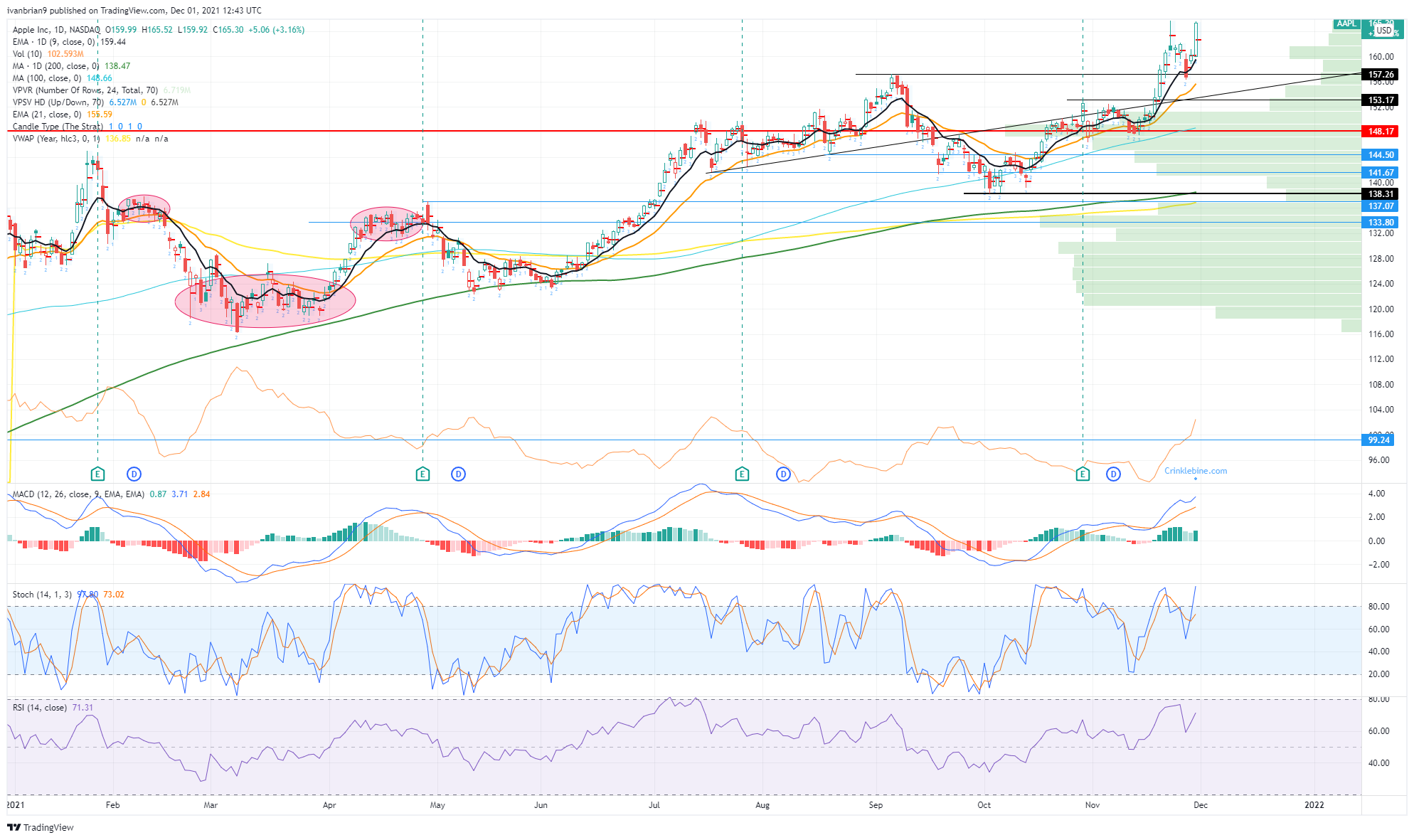