It has been quite a year for NASDAQ:AAPL investors as shares are now up over 140% over the last year, while the company has improved its market cap from $1.5 billion in June to over $2.2 trillion at the end of August. The 4 for 1 stock split that has now officially gone into effect has made the tech behemoth accessible to retail investors – especially those who use platforms like Robinhood where they have the ability to purchase fractional shares. Look for an entirely new group of investors who can now afford to invest in Apple at its lower price.

September is always an exciting month for Apple users and investors as the company readies for the latest instalment in its flagship iPhone line. This year, due to COVID-19 affecting supply chains and part production, the iPhone 12 is rumoured to have a staggered release with the basic models available in October and the higher-end models in November, just in time for the holiday season. While this should not have any effect on the stock price for Apple, it could potentially have an impact on quarterly revenues when they are announced at the end of October. 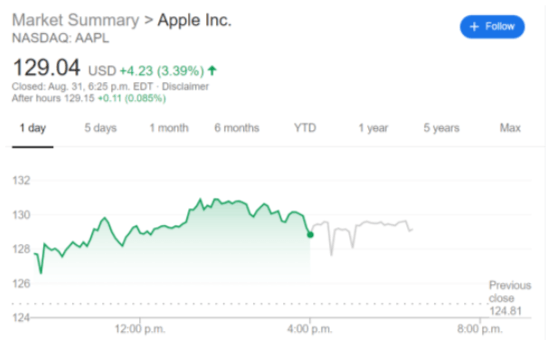 With Apple’s stock price continuing to rise, it should be no surprise to anyone if we see a $3 trillion market cap at some point in 2021. Historically after Apple has split its stock, the return for the following year has outpaced the performance of the S&P 500 considerably with the exception of the dot-com collapse in 2000. Every other split has far exceeded the rest of the market – which could mean another healthy year for investors as the S&P has already returned 20% over the past twelve months.